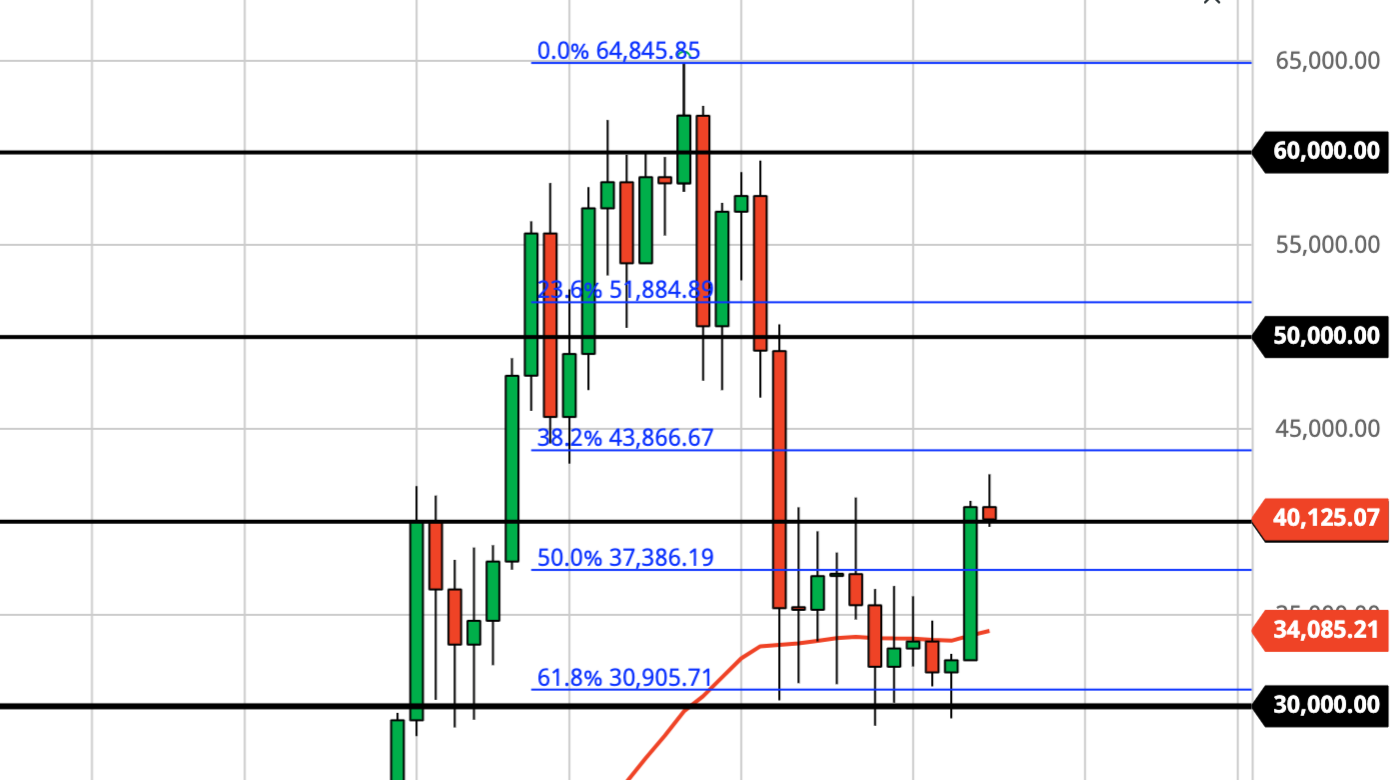 Bitcoin rallied to kick off the week to about $42K before pulling back, closing the weekly candle with a bit of a shooting star. This is a bearish candle but the jury is very much still out. Transitioning from one trend to another is a messy process, especially in crypto, so don't expect it'll be as easy as a linear move up to $50K. 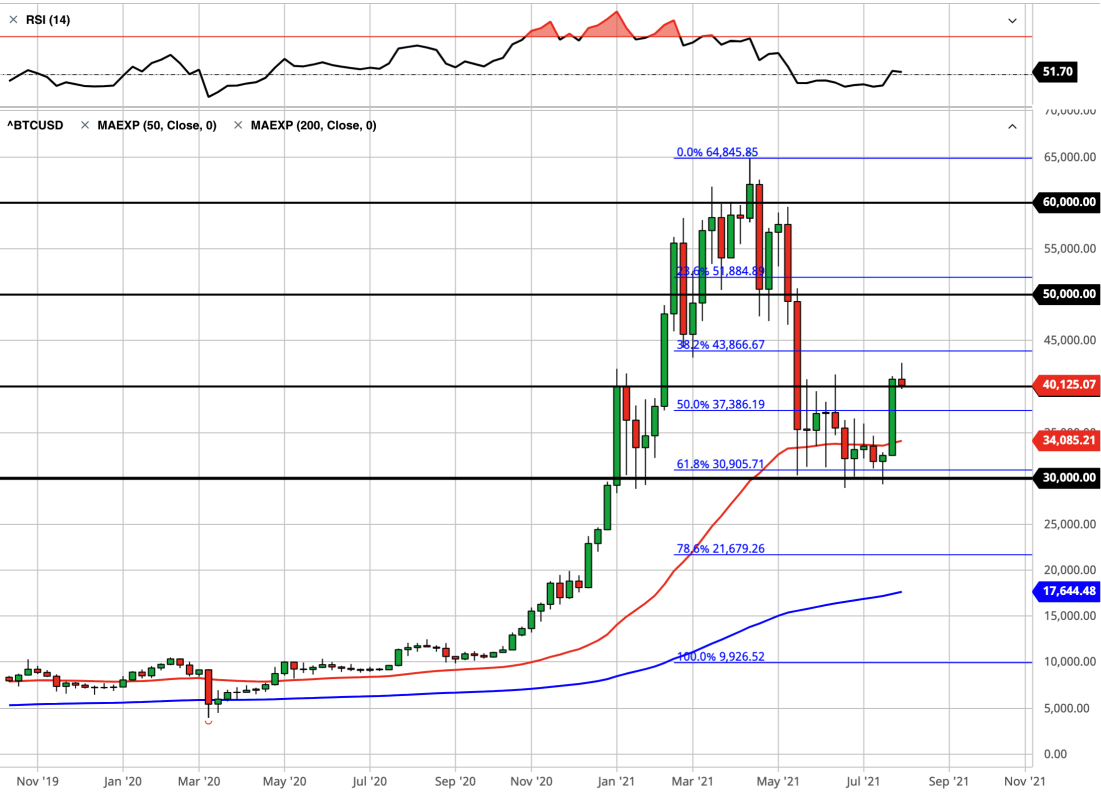 Bitcoin is cautiously back in bull mode as it battles with resistance at the $40K level. It's been about a week now that Bitcoin broke out to the upside and has been flirting with the $40K level. It remains to be seen if this rally will be sustained, however, with bullish technical divergences on the weekly and daily charts now, it wouldn't be surprising for Bitcoin to test semi-new support (50 Week EMA at $34,100) before breaking $40K. If Bitcoin breaks above ~$41K, there's not much resistance between there and $50K, so we could see a quick move to the top of the next $10K range around $50K.

On the contrary, if Bitcoin breaks back below the 50 Day EMA around $34K and the $30K level, BTC would likely drop to the mid- to-low $20Ks, the previous cycle's ATH, where there should be ample buying pressure. I saw an analysis the other day positing that this Bitcoin rally could be a corrective Wave 4 rally before a final Wave 5 to a lower low—likely this correction's ultimate 'peak' around ~$21K. While this is possible, it would certainly be unprecedented as it's extremely unusual for a >60% retracement in a bull market, even in crypto. This abides by our line in the sand at $20K, which would preserve the current trend. If BTC impulsively breaks above ~$41K, we can probably rest assured that this rally was not a correction W4 and $20K is not in the cards anytime soon. If BTC pulls back to ~$34K or worse, $30K, then technically, it would be prudent to have limit buys set.

Fundamentally, nothing has changed. I continue to buy on dips and earn passive yield on my crypto, and will continue to do so until the fundamentals change or the TA becomes catastrophic. 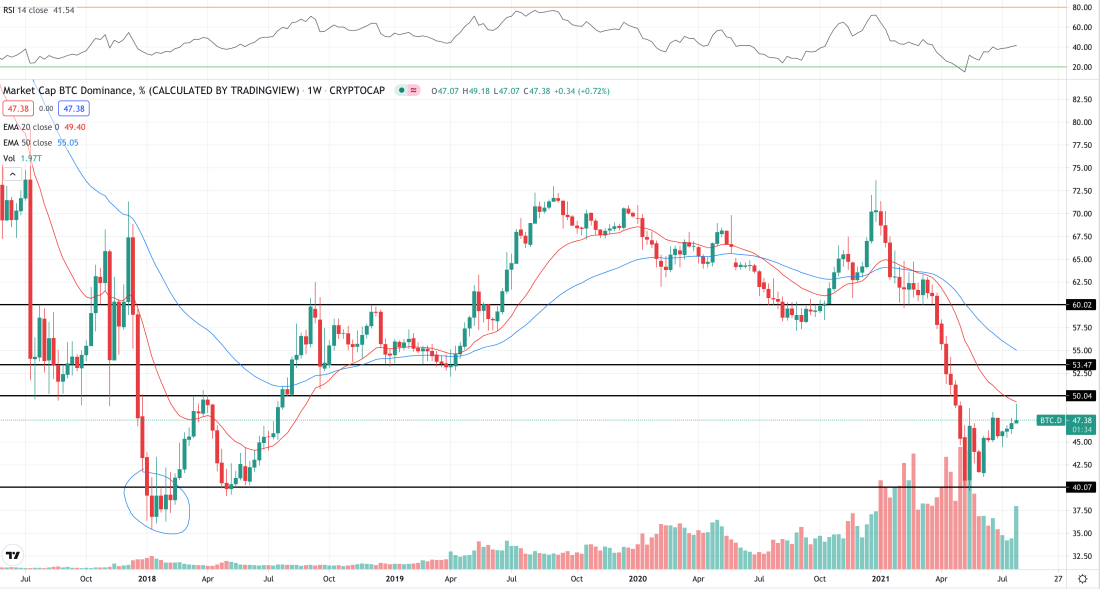 BTFD. Fundamentals have not changed. By nearly every measure, we have not gotten anywhere near a market cycle top; in fact, we are maybe halfway through this bull market. What do you do during bull markets? Buy. The. Dip.