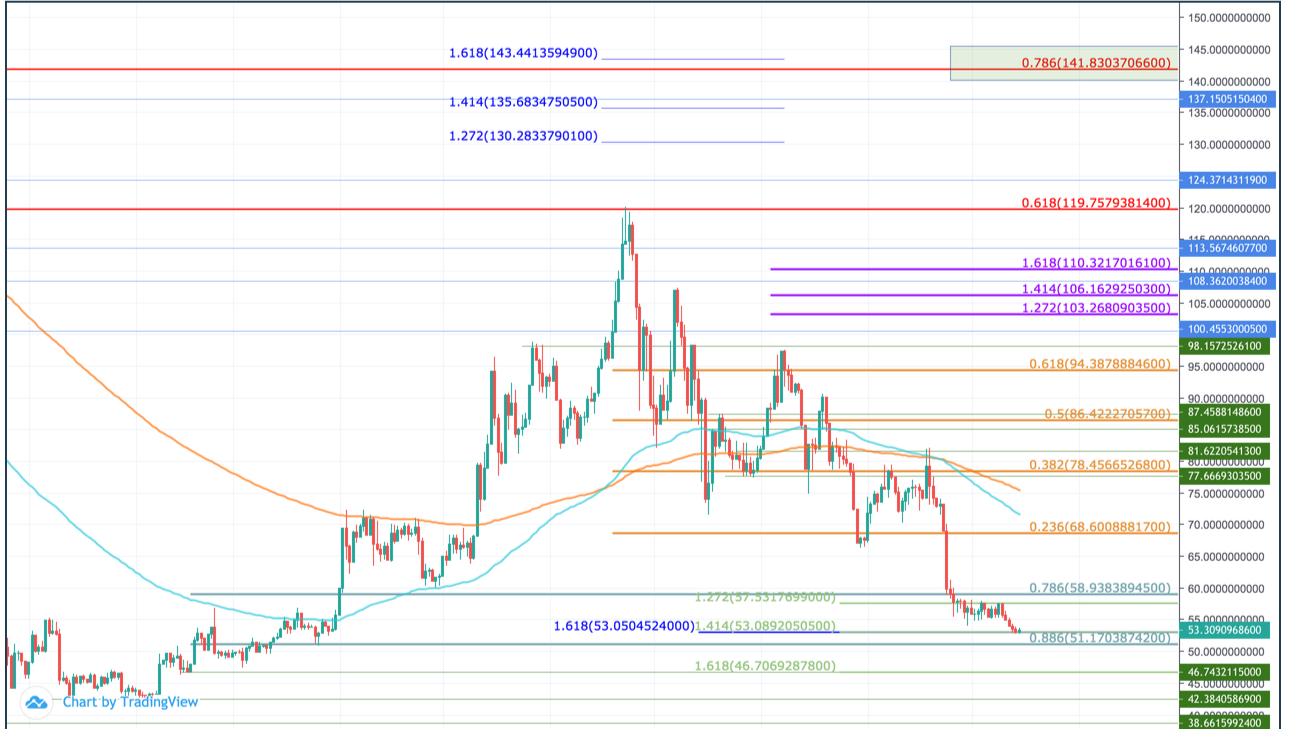 However, I do believe that Monero has a VERY strong future ahead of itself. As our privacy continues to erode on the internet, privacy-preserving projects such as Monero will continue to enjoy the limelight as users look for alternate methods to keep their on-goings private. Furthermore, Monero has scheduled development upgrades that will take the privacy and security of the network to the next level  - and when these upgrades are implemented, Monero will continue to reign above its competition. For these reasons, I strongly believe that Monero has a solid potential of increasing by 172% (from the current price) to reach my target of $141 at some point during 2020. This is a pretty conservative estimate because if the added privacy features are integrated, Monero could easily climb much higher and test the $180 - $200 region.

In this article, I’ll firstly cover a range of topics that I believe will influence XMR in reaching my $141 target during 2020 and then analyze XMR on the long term daily charts to highlight some areas of resistance on the way toward the target.

Monero has set out to become the cutting edge of internet privacy when conducting financial transactions on the internet. Forked from Bytecoin, its blockchain uses a number of privacy features that allow users to hide their addresses as well as transaction amounts, making all transactions untraceable. It can achieve this high level of privacy through the integration of Ring Signatures, RingCTs, and Stealth Addresses within its network- we won’t be discussing these privacy technologies here today but if you need to refresh yourself take a look at this great article.

It is for this reason that Monero has been ranked as a top 20 project for so long. In fact, following is a screenshot showing Monero ranked in the 15th position WAY back in October 2014;

Another great feature of Monero is the fact that it always aims to remain ASIC resistant. ASIC miners are specialized machines that can be used to mine cryptocurrencies. However, ASICS is mich more powerful than traditional GPUs and CPUs leading to miner centralization amongst ASICs. This is extremely dangerous for any blockchain as decentralization ensures for a sustainable economy. For this reason, Monero currently uses the CryptoNight Proof-Of-Work mining algorithm which is very friendly toward CPU and GPU mining.

The team over at Monero is taking things one step further and is scheduled to introduce a whole new mining algorithm at some point toward the end of October 2019 (discussed further below).

Monero is also completely fungible as a cryptocurrency, this is due to the privacy features that it employs. Fungibility basically means that 1 unit of an asset can be swapped for another unit of that same asset. However, when we consider cryptocurrencies like Bitcoin, fungibility is a huge problem. For example, if a Bitcoin has been tainted by usage through the dark web many users will not want to swap a clean BTC for a ‘dirty’ BTC - showing the lack of fungibility. This does not occur within Monero as XMR transactions are untraceable, leading to Monero being completely fungible. Fungibility in Bitcoin is becoming a serious problem and some services have popped up to track Bitcoin abuse.

Monero seriously does have a proven track record as it has consistently managed to remain within the top 20 cryptocurrency projects for over 4 years. This shows that investors are still actively interested in XMR.

Analyzing the graph above, we can see that the recent development activity was the highest during October 2018. However, this is certainly nothing to worry about as the team behind Monero has actively been working behind the scenes and have some interesting upgrades and feature additions in the pipelines which we will discuss below.

Monero periodically releases updates. There is an update that is scheduled for the end of October 2019 which will see the release of Version 0.15 go live on the Monero network.

This is upgrade will be considered as a major upgrade as it will introduce a completely new mining algorithm known as RandomX. This shift to a new mining algorithm will certainly help Monero rise in 2020 as the decentralization of the mining will increase substantially.

The new long term proof-of-work algorithm that Monero intends to employ, RandomX, will achieve a longer-term ASIC resistance that the current CryptoNight algorithm can not provide. RandomX is optimized for general-purpose CPU mining which will mean that anybody with a decent CPU can mine on XMR. The benefits of this will extend through 2020 and further into the future as ASICs are kept out from centralizing the mining power. For more information on RandomX, check out this fantastic write-up.

Version 1.5 will also remove the long payment IDS that Monero uses. This is intended to make it easier for the user experience and to also improve privacy. Furthermore, this should also make it easier for services and exchanges to conduct their operations.

Although Monero does have a high level of privacy it is still susceptible to some attack vectors. For example, there is a potential vulnerability at the network layer in which the IP addresses of users can be identified. This is because when you send a transaction, some of your metadata may be exposed through some analysis. Although the analyst has no idea of knowing who you send XMR to or how much was sent, they will still KNOW that you used the Monero platform - which is enough to land you in jail in some countries in the world.

Monero had started to develop an anonymity technology that would allow users to hide their internet traffic which was known as Korvi. However, it seems that the development of Korvi has disintegrated and the team has now moved to replace Korvi with a similar technology known as I2P-Zero.

I2P is known as the Invisible Internet Project. It is a protocol that allows users to encrypt all of their internet traffic. I2P-Zero is designed to create a lightweight, zero-dependancy installation of I2P that can easily be bundled with Monero in the installation. It functions by creating an overlay anonymous network layer that will conceal every move across the internet. This allows for users of I2P to access censorship-resistance peer-to-peer communications.

When I2P-Zero is integrated into the Monero wallet, all of the transactions on Monero will be routed through the anonymous I2P network which will allow users of Monero to have total internet invisibility and, thus, greatly increasing the privacy and security of the Monero network.

The project is still in active development in the alpha phase. However, during a recent meeting with the Monero team, one of the developers had stated that he is more than halfway to integrating I2P-Zero and Tor into the GUI of the wallet.

Many were hoping that the upgrade would come with the V0.15 upgrade scheduled for the end of October but it has not been mentioned in the announcement and therefore we can assume that it is not scheduled. However, when I2P-Zero is integrated within Monero, this will most certainly act as a catalyst for XMR to rise toward my 2020 target as demand for the high-level cryptocurrency project increases. 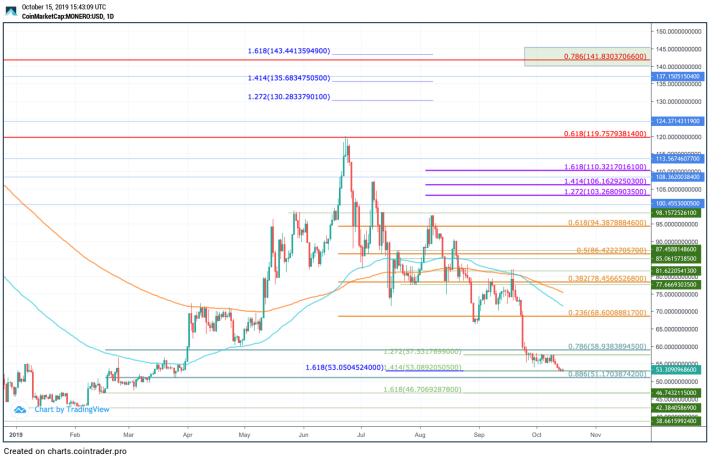 Taking a look at the daily chart above for Monero, we can clearly see that XMR had surged toward the first half of 2019. This price increase is apparent on many altcoins as the industry started to rise at the same time. XMR managed to increase by a total of 184% from the February 2019 low of $42 to the June 2019 high of $120.

Since reversing at the aforementioned resistance, XMR has plummetted by a total of 56%. The cryptocurrency nose-dived beneath both the 100-day EMA and 200-day EMA during August 2019 and continued to fall further lower ever since. The market is now approaching support provided by the short term .886 Fib Retracement priced at $51.

As of October 2019, we are most certainly bearish. For this market to be considered bullish in the short term we would need to see price action rise back above the 200-days EMA at around $79. If Monero can break above $60 - we could consider the market as neutral.

Although Monero has had quite the depressing year in 2019, things may just turn around for 2020. A combination of increased demand for privacy and scheduled upgrades can easily help Monero to rise by a total of 172% and reach my 2020 target of $141. The Version 1.5 upgrade will kick things off as it introduces a completely new mining algorithm to circumvent ASIC centralization over the long term. Further upgrades such as the integration of I2P-Zero will make Monero more private and robust - increasing the demand for the cryptocurrency.