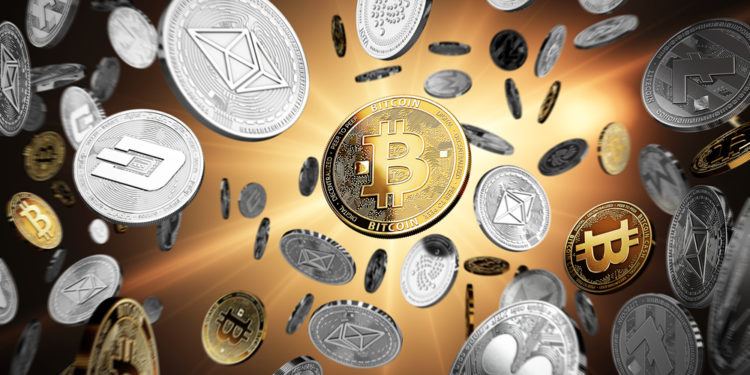 The cryptocurrency markets have been falling this month after going on an epic surge during May and June 2019. With Bitcoin falling and creating lower lows it felt like a good time to provide a quick overview of the top 5 projects!

Bitcoin has recently seen a turn around from the $11,000 resistance level which has caused BTCUSD to fall and reach where it currently trades at around $10,276. The cryptocurrency has seen some stability over the past 7 days after dropping by only 3%, however, Bitcoin has dropped through a major rising trend line which has totally changed the bullish run that has seen an 84% price rise over the past 3 months.

Bitcoin currently holds a market cap value of around $184.12 billion. 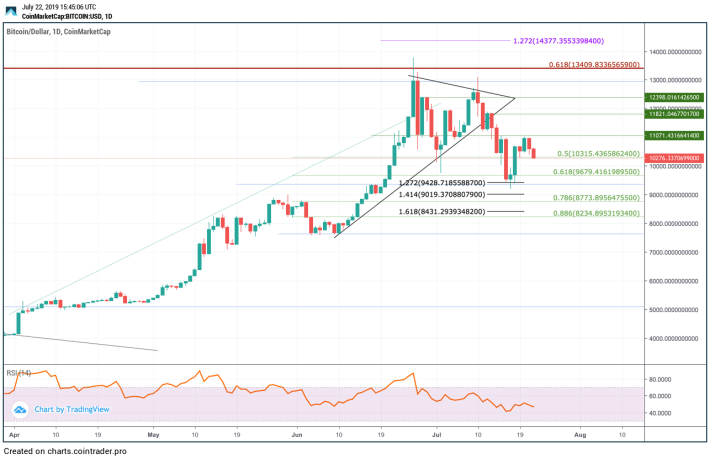 Looking at the chart above, we can clearly see the $11,000 level causing Bitcoin to roll over recently. The market is currently supported around $10,300 but with the recent reversal, we can expect Bitcoin to head beneath $10,000 pretty soon.

The RSI has recently attempted to break above the 50 level but had failed to be successful which shows that the sellers are still in control of the market momentum.

Ethereum has seen a sharp 30% decline over the past 30 days which has brought the price for the cryptocurrency down to the $216 level. Ethereum had attempted to bounce higher above $230 but the resistance proved to be too strong causing Ethereum to head back toward $200.

Ethereum remains ranked as the number 2 cryptocurrency with a market cap of $23.04 billion. 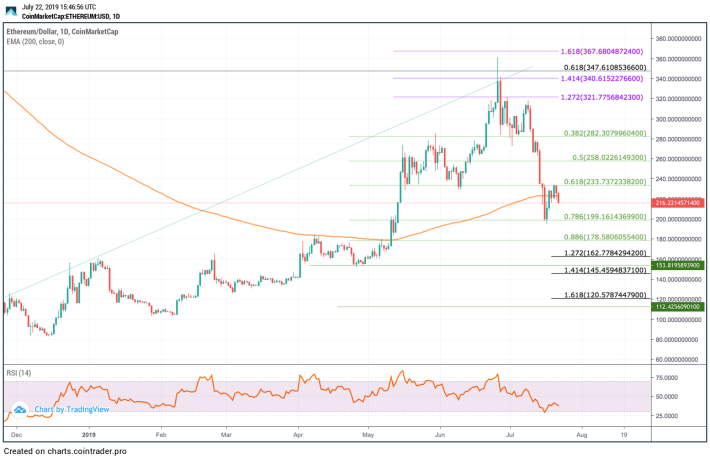 Analysing the chart above, we can clearly see the resistance at $233 being too strong for Ethereum causing the market to roll over and fall. Ethereum has now started to make solid lower highs and lower lows which is a strong sign of a bearish trend. This sentiment is further confirmed with the 30% price fall seen over the past 90 days.

IF the sellers continue to push the market lower, we can expect immediate strong support below to be located at $200. This is further bolstered by the short term .786 Fibonacci Retracement level (drawn in green) priced at $199. If the selling pushes Ethereum beneath $199, further support is then found at the short term .886 Fibonacci Retracement level at $177. Beneath this, the next levels of support lie at $162, $160, $153, $150 and $145.

The RSI is also well below the 50 level in this market which shows the bulls are in control of the market momentum.

XRP is one of the only cryptocurrencies in the top 10 projects that had not surged significantly during the months between March and June. Although it did increase by a large amount, it was still a considerably smaller bull run when compared with other top 10 ranked coins.

Despite not relatively rising as much, XRP has still managed to suffer a 34% price drop over the past 30 days which has brought the price for the cryptocurrency down to $0.32. Ripple is the 3rd largest cryptocurrency project with a total market cap of $13.63. 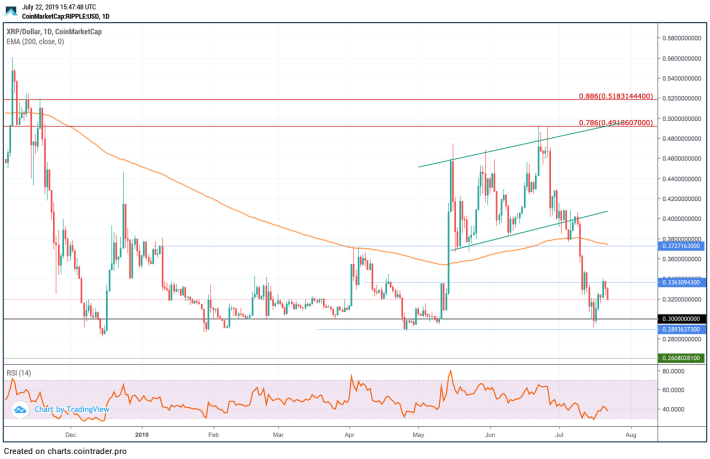 Taking a look at the XRPUSD chart above, we can see the significant decline after XRP had met resistance around the $0.48 level. After reversing at this level, XRP went on to fall aggressively to reach where it currently trades at around $0.32.

The good news for XRP holders is that the $0.30 level should provide very strong support moving forward. The $0.30 support level has helped keep the market from falling lower during the entire period of 2019 and therefore is expected to hold moving forward. If the sellers do push the market beneath $0.30, it will only be a brief spike lower in which the $0.2880, $0.2811 and $0.28 levels should provide support.

The RSI is also well in the bears grasp at this moment in time as the sellers control the momentum.

Litecoin has suffered a small 4% price drop in today’s trading session, bringing the price for the coin down to $94.42. The cryptocurrency had met resistance at the 200 day EMA and the $100 resistance level which had caused LTCUSD to roll over and fall. Litecoin has no suffered a 33% price drop over the past month of trading.

Litecoin remains the 4th top-ranked cryptocurrency project with a market cap value of around $5.93 billion. 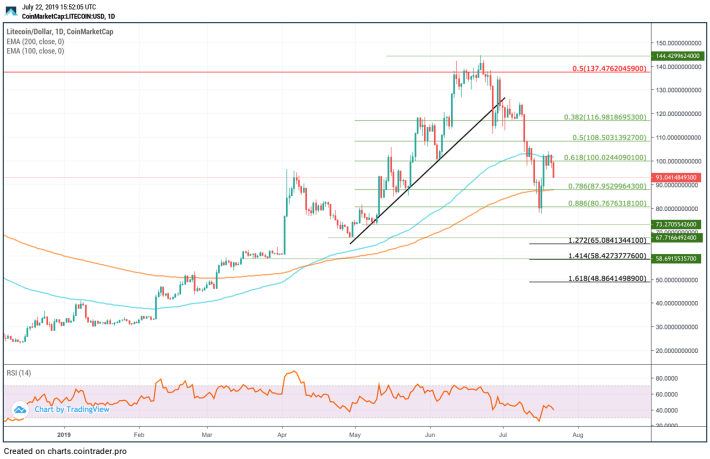 Analysing LTCUSD above, we can see the $100 level causing LTCUSD to roll over and fall once again. Litecoin had been on an epic run during May and June as the cryptocurrency was able to increase by a total of around 90% to reach a high around $145 before reversing.

If the sellers continue to push LTC lower again, we can expect immediate support toward the downside to be located at $87.95. This support is provided by the short term .786 Fibonacci Retracement level and the 200 day EMA and is therefore expected to provide strong support moving forward. Beneath this, further support lies at the .886 Fibonacci Retracement level at $80 and then at $73 and $70.

If the buyers can defend the current support level and push the market higher, significant resistance will be located at $100. Above $100, higher resistance lies at $108, $110 and $116.

Bitcoin Cash has likewise been suffering, dropping a total of 26% over the past trading month, bringing the price for the coin down to the $309 level. Bitcoin Cash had managed to surge to a high around $500 during June before rolling over and falling to where it currently trades.

Bitcoin Cash is the 5th largest cryptocurrency, not too far behind Litecoin as it presently holds a $5.56 billion market cap value. 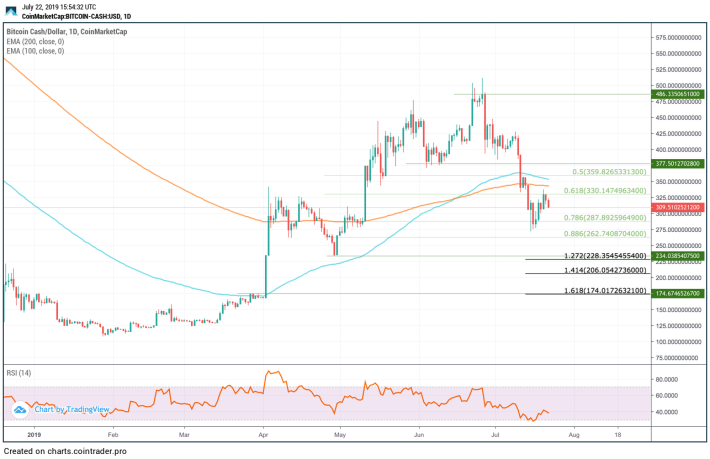 Looking at the chart above we can see that Bitcoin Cash has dropped beneath both the 100 day EMA and 200 day EMA. If the sellers continue to push the price lower for BCH, we can expect immediate support below to be located at $300. Beneath $300, support can be found at the short term .786 and .886 Fibonacci Retracement levels priced at $287 and $262, respectively.