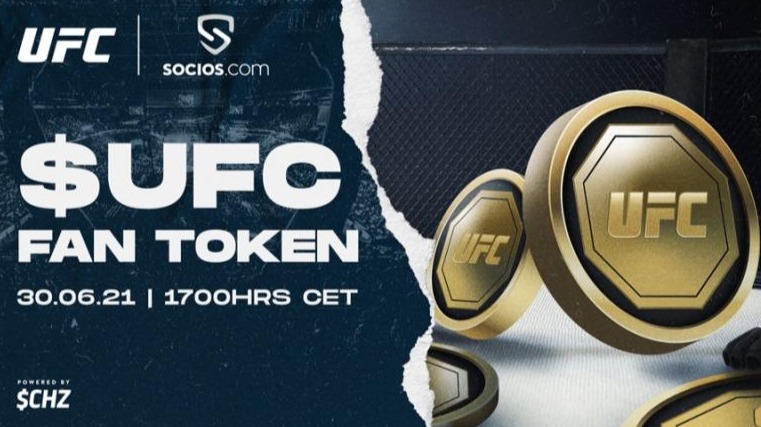 I have been on the Socios.com app for a couple of years now and really have been on the app since it first launched. Initially, with the focus on soccer teams and Europe, the platform was not too useful to me however I liked the idea and kept accumulating Chiliz and Socios tokens themself. As the platform and network have grown it has been really cool to see the addition of more and more sports and organizations.

Last year it was announced that Chiliz and UFC had reached an agreement and UFC was going to launch a fan token on the Socios.com app. With the pandemic naturally it threw it all off however yesterday it came out that the token would be launched today at 11 am eastern time.  Naturally, I was super pumped as I am a huge UFC fan. As opposed to the other fan tokens I have collected I know UFC and the rules, fighters, etc. so this token I could really use and understand. I was at work but I set up my breaks so that I would be free before the launch and then at the beginning so I could get the UFC token.

As soon as the clock hit zero I was ready and hopped on and attempted to buy just 5 tokens. I got a notification that there were a lot of people trying to buy tokens so then I decided to try a different amount as it failed. I tried everything from 10 tokens to 1 and even restarted the app a couple of times to make sure that was not the issue with the constant failure to purchase. I could not purchase the fan tokens however no matter what I tried and after 15 minutes and sending them two emails about being unable to I waved the white flag.

I then went to the UFC page on the app to read more about the token and I was dumbfounded when I saw at the bottom of talking about the token it had the good ol' kicker "initial sale unavailable in the US". You could have knocked me over with a feather because even with UFC and MMA being an international sport the UFC's core draw is still United States Citizens and people located within the country. Socios.com has also allowed people from the US to buy tokens before as this was the first one I ever saw that was labeled like this.

With more sluicing, I found out they do not have a US location launch date yet it's TBD. I could not believe, that the UFC, based in the US was not allowing US residents to buy the fan token. I have no idea if this was a UFC choice or a Socios.com choice but it was super super annoying that they did not earlier highlight this and that I wasted my time setting up for this launch and then going through it for it too be unavailable in my area. Socios.com is making a huge US push and I am just saying this was not the brightest idea to have such an early fan token that the US individuals would be interested in fail in such an epic fashion.

At a minimum, it should have been that there was a date for when the release would be for the US residents or honestly just hold off and do it all at once. This type of rollout just looked bad since they allowed you to believe and attempt to cop but constantly fail and have to look up why the purchase was failing when you had plenty of Chiliz. I hope they learn from this and bounce back because this was the first token that would be much more applicable to the average US resident so to have it fail like this.... not a good move.