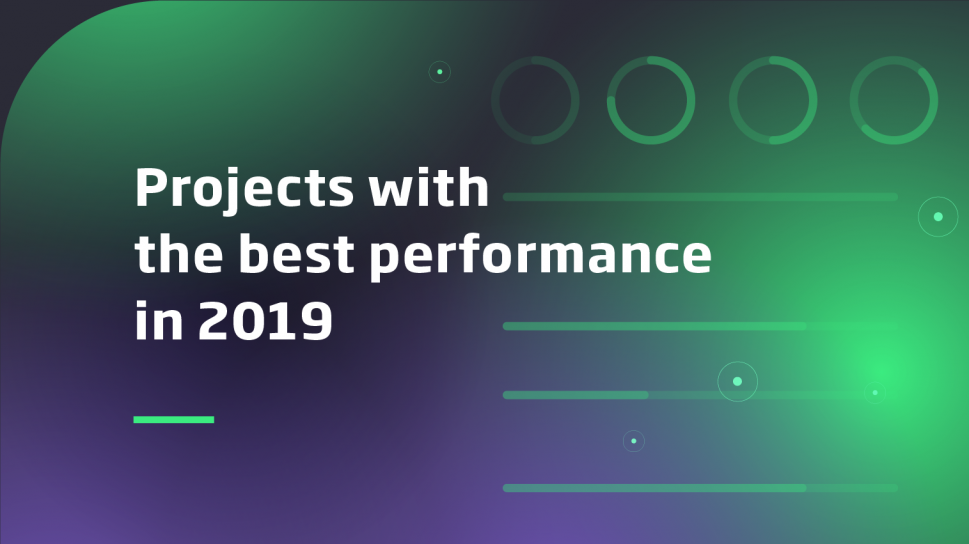 Those who have been around for awhile must remember what the end of 2017 and the beginning of 2018 were like. Every single day a new coin would start its mission to the moon and everyone would jump on the bandwagon. As little as a tweet from McAfee would mean an increase in the price of 100s of percentages. The remaining of 2018 went a little different though. We suddenly saw the prices decline and slowly the panic started hitting people. One by one people started selling their tokens for lower prices than they bought and some just kept holding on to their beloved tokens. The market has been in bear-modus for nearly two years now, but nevertheless some projects have shown that market conditions do not matter.

We will be looking at the projects that delivered the best results for investors in 2019. Some of these projects, you might have never heard of, or you were one of the lucky investors that were able to ride the wave.

Chainlink is one of these projects that no one could miss in 2019. They were introduced to the market back in late 2017 but never really had the enormous pumps like other projects. They remained on the sidelines and kept steadily developing. This all changed in June of this year, 2019. We suddenly saw an enormous increase in price, why you might think?

After these two announcements, all the major exchanges followed and the price went off from roughly $0.25 all the way up to $4.39. Ever since the price went down a little, but it’s still a huge return in comparison to the prices at the beginning of the year. Sources say the pump was artificial and had nothing to do with genuine price increases, but it’s crypto after all so no one knows what’s genuine or the work of a group of whales.

There are not that many projects coming out of the African continent, not to mention the islands around the continent. Ever heard of Mauritius? That’s where Qubitica is based. The project has an extremely simple looking website, nothing fancy. The project was created in the middle of the bear market, late 2018. This was the moment people started losing their nerves and wanted nothing more than a proper performing coin.

The token is used as a way to get into the community for developers and enthusiasts to support decentralized organizations. Ever since the start of 2019, the prices went up from just $4 dollars to its peak of $64 dollars, that’s a return many projects can be jealous of. There are less than 1 million tokens in circulations, so prices can reach high numbers with not that much capital. Prices have decreased since the all-time high, but they’re still sitting at a 5x increase from the start of 2019.

In the middle of the bull run, EDUCare hit the markets. They got listed on a couple of exchanges, not the big ones, but they got listed. Prices went through a big cycle and shortly after went down again. However, 2019 was an incredibly good year for EKT. The year started slow with prices around $0.003, but nowadays we’re sitting at $0.10, that’s an amazing return for investors all in one year.

There’s not that much clear about the project besides them describing the project as ‘A public chain ecosystem based on Multi-Chain structure’. The project seems to be located in China as most of their website is in Chinese, their blog posts and career openings. It’s unclear to say why this project has been delivering such good results. There are not too many big announcements in terms of partnerships or revolutionary technologies they have released, nothing of that. In all honesty, it looks like ‘just another’ blockchain platform, the reason why this one is performing way better than others is vague.

After the 2017 altcoin run, we suddenly saw every single entity create their own coin. You might think, is this coin associated with the Los Angeles Clippers? It’s not. It’s a decentralized financial ecosystem. They have created several products that are all surrounding the financial markets. You can deposit your funds into their wallet and it’ll be used to invest. With your CCCX tokens, you can earn dividends from the investments made by the project. They promise to invest in arts and sciences and are based in China as well.

Back in January, prices were pretty flat. On January the first, the price for one CCCX token was $0.00057 USD. Right now, the price is $0.013, a vast increase in price. That’s a huge return for investors. Why the prices went through the roof is again, unclear to say. There have been some products that were released, but nothing as spectacular as the Chainlink’s partnerships with Google.

Let’s be fair here, the prices are not what they used to be in the middle of 2019, but the project did perform incredibly well this year. Prices went up by 15,000%, that’s a return people who bought Bitcoin right at the start have seen. When you look at the graph, however, you might wonder if this pump in price was all genuine. Prices went all the way up to $0.089 dollars after starting from $0.00039 dollars. The project is supposed to bridge the gap between regular HTML5 and the blockchain world.

One of the reasons for the pump could be the fact that EGT is part of Egret technology, a publicly-traded company based in China. China is the country that we’ve seen leading many technological revolutions and they have recently expressed their love for blockchain. Whether prices will be going wild like in the mid-June levels, that’s the big question no one has the answer to.

Girls and boys, never forget; Always do your own research. These coins may all look like projects that will make you rich, but the reality is different. These projects are all, besides Chainlink, traded on really small exchanges with low volume, not that much capital is needed to pump up the prices to enormous levels. Always keep in mind, when a project is pumping with 100s of percentages, there’s a strong chance the pump will not last. That’s just history repeating itself over and over.