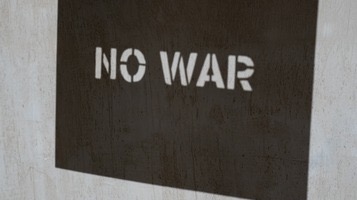 Shockwaves reverberated through markets when the Russian-Ukrainian conflict broke out: the S&P 500 and save-haven fiat currencies dropped, while commodities prices surged amid supply disruptions fears. Even though cryptocurrency markets have suffered a slump initially, Bitcoin has held its ground.

Bitcoin has outperformed most traditional asset classes, including safe-haven fiat currencies like the Japanese yen (JPY) and Swiss franc (CHF), which are generally viewed as geopolitical hedges.

It turns out that during times of crisis, cryptocurrency began revealing its true nature, proving it isn't just another traditional asset.

Below we can see that the correlation between BTC and the S&P 500 index has started to wane, indicating that Bitcoin’s time as a safe haven asset is probably on the horizon again.

Bitcoin trading volumes in both the Russian ruble and Ukraine's hryvnia peaked almost immediately after the Russian invasion, underscoring cryptocurrency's significance in these countries.

The plunge in the Russian national currency and restricted access to the greenback during the wave of global sanctions prompted people in Russia to rush to the number one cryptocurrency and other digital assets. 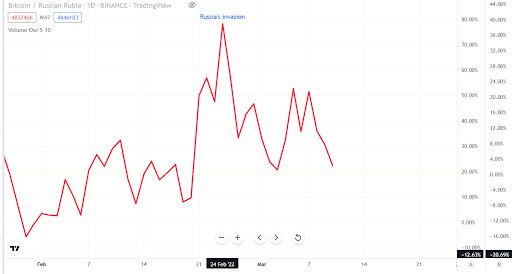 Meanwhile, crypto's nature as a borderless currency allowed Ukraine to raise millions of dollars in crypto to support its army and hacktivist groups. Even the Ukrainian government is accepting donations in BTC, ETH, and USDT, having raised more than $63 million. 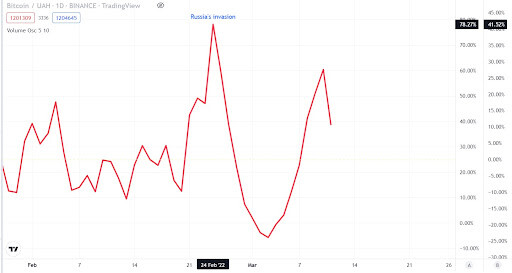 The reliance on traditional banks becomes increasingly difficult when governments are in chaos. In both Russia and Ukraine, ordinary people are turning to crypto as an alternative to financial institutions that restrict their access to foreign currency and bank accounts. Therefore, people seek an anonymous system without government involvement.

Why Are Regulators Worried?

Regulators are calling on crypto exchanges to comply with sanctions over concerns that Russia's government officials might move their assets into crypto to evade western sanctions. Exchanges blocked all transactions associated with sanctioned individuals' accounts. For example, Coinbase blocked over 25,000 addresses linked to Russia .

Binance, however, believes the concerns are exaggerated since it is nearly impossible to hide large amounts of cryptocurrency. “Crypto is not a very efficient way for a government and for a nation-state to elude sanctions. There are other ways to move billions of dollars using the financial system that already exist, rather than use cryptocurrency,” said Tigran Gambaryan, Binance's vice president of global intelligence and investigations.

Since cryptocurrency transactions are recorded on a public ledger, they create a permanent record that is undesirable for organizations looking to hide their identities.

Services that mix streams of potentially identifiable cryptocurrency, known as tumblers, are not designed for transferring large sums and appear to be slow.

In this context, it is possible that regulators are just pushing this narrative in an attempt to tighten their grip on crypto. Therefore, we could see more crypto regulation in the near future. In light of the longstanding global-scale crypto regulation talks, this might well be the case.

I'm pretty sure Satoshi Nakamoto would reject this question if he or they were asked what side crypto would take in this conflict. Cryptocurrencies like Bitcoin were invented to be neutral. They were designed so that no country, government, bank, or other institution would be able to prohibit their use.

To put pressure on Putin's regime, the Ukrainian government has proposed banning all cryptocurrency transactions coming from Russian citizens, regardless of sanctions. Most crypto exchanges executives have objected to the idea, citing the minimal state intervention roots of crypto.

"We are not going to unilaterally freeze millions of innocent users' accounts," a Binance spokesperson told Reuters.

Geo-blocking may, however, be forced upon exchanges by legal mandate from US or European authorities.

Considering Russia is ranked 18th in the world for crypto adoption, contributes 14% to the overall crypto market value, and is the third biggest Bitcoin miner globally, this would be a major blow to the crypto market. So let's hope cooler heads prevail.

Crypto should not be about picking sides when it comes to who can use it – ordinary people in sanctions-hit Russia or war-torn Ukraine. Crypto exists to serve people outside politics, not governments. It offers a helping hand to everyone in need; it unites the world; and it knows no nationality or borders. While government institutions fail ordinary people during times of war or crisis, crypto reveals its true nature, which is a blessing for humanity.