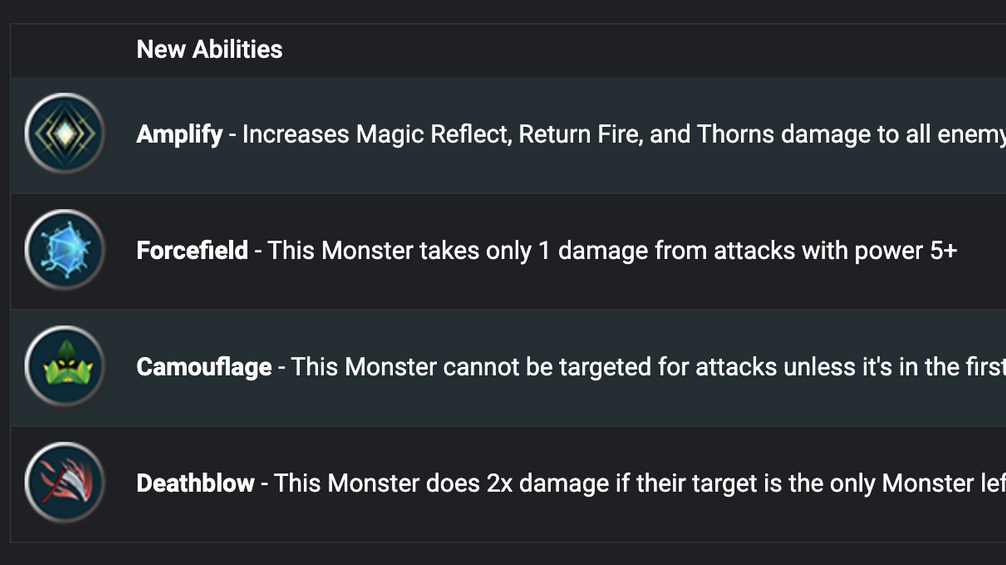 The Newest Abilities in Chaos Legion

Another speculative article, I'm hoping you guys are enjoying these... Again entirely speculative, these are NOT based in fact, I will be speculating on the abilities, their applications to the splinters, the most likely forms they will take, and how they might change values of cards.

In this one I wanted to talk about how I think these abilities are going to change the game, the meta, and the values of cards.

Amplify is a particularly exciting ability IMO. I think it's very powerful, and I have some speculations on how this power will be controlled.

I believe it is very likely that this ability will be relatively inaccessible. As it will pair monstrously with Mylor, Lir Deepswimmer, and Owster Rotwell (hint: these cards might go up)

I expect these are the ways we will likely see these cards:

Amplify boosts the value of all cards with Thorns, Magic Reflect, Return Fire, and Retaliate, empowering each and every one of them. The unexpected changes I see coming from this is a Increase in the value of cards with the Oppress ability, such as Harvester and Fineas Rage, as these cards will be more effective at countering this new ability, which mostly benefits non-attacking tanks, such as Naga Brute, Almo Cambio, and Onyx Sentinel (Which will all likely increase as well)

Forcefield has already been shown on a Water Legendary, but this is a very powerful ability that negates many of the heavy hitters of the game. In particular, this is a great counter to Llama Kron, and Sandworm, who should be knocked back a bit in potency in the meta due to this.

I'm thinking Forcefield will have 2 applications: As a tanking ability for position 1 Cards, and as a Backline protection ability, and as such, we will see a mix of high mana cards with these abilities in Range, Magic, and Melee.

I think we will see this in the following cards as speculation:

As for how it'll affect cards: Llama Kron is getting hurt badly by this, it shouldn't knock it too far down a peg, but that's what the other ability is for. I also think many of the heavy hitters will see a drop in value, the more well-distributed this ability is. I don't really see it changing the value of any cards specifically without first seeing how these cards manifest themselves, so unfortunately no speculation here beyond Llama Kron becoming a bit cheaper and less powerful.

The anti-Opportunity, anti-sneak, anti-snipe card! This ability will let you sneak around snipe heavy teams such as Low Mana Earth, Death, and Fire.

Camouflage is a small answer and tool to knock down Sandworm yet again, and nearly all opportunity attackers, sneak attackers, and snipers! I would think the presence of this ability will cause these cards to teeter, however, it will depend entirely on which splinters get them, either allowing new splinters to counter others, for instance, Death suddenly having a stronger play against Fire for instance. Or we will see splinters become even more shutdown by other splinters, for instance, if Fire had a camouflage card, Death would struggle even more. No speculation on specific cards though, it will depend on the splinters this ability gets distributed to.

This exists entirely for Llama Kron, G Cube Stalls, and Last Stand Torhilos for instance, and it really hurts Llama Kron, in fact, nearly all of Llama's comps are affected by this ability, and it serves as a purposeful direct counter to Llama.

Cards/Splinters I think will have it:

Expect Llama Kron to go down, there's not 1 but 2 abilities in here that are specifically designed for dealing with Llama Kron, the combo, along with G Cube, will be seeing some trouble from these cards if played in last position.

Never played? Interested in getting in on the action? Want to find out what all the fuss is about for these battles, or maybe you've seen a bunch about SPS? You can play the game 100% for free initially, without earning currency. If you like it, you pay $10 to get in on the action by buying a Spellbook! You'll make that 10 dollars back in less than a month at current prices. If you sign up, feel free to message or comment and I might hook you up with some free starting cards, or delegate a card to you for a week!

Join me on Splinterlands, if you use my link, I'll send you 100 DEC when you sign up and get a spellbook, (as long as you show up as referred) which should help you get started via renting! Also, feel free to message me, I can answer any questions, give tips, etc.