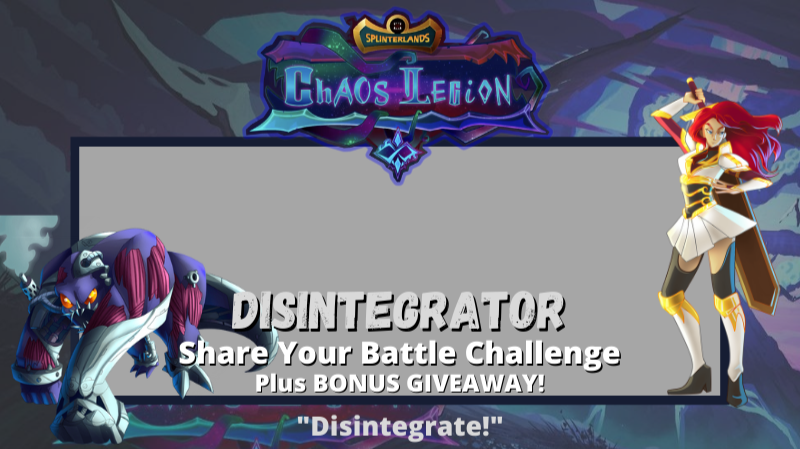 I'm gunna start removing backgrounds from the cards because it's taking too long :P

Disintegrator is a niche card that many in Bronze will not properly appreciate: He's expensive, and he doesn't do much when your available mana is as low as it is most of the time in Bronze, however those of you who play in Silver and Gold will know that there are certain situations where not choosing Disintegrator is basically throwing a game in specific rulesets.

Disintegrator doesn't really fit in as a typical tank, and is more of an off-tank / support card, and it's important to play him as such, as his Demoralize effect is very important to keep up as long as possible in certain battles, and your placement will be your key to winning the matchups.

As a Neutral monster, this gives you a lot of anti-melee options for any Splinter, and allows some of the squishier teams to play into melee builds more successfully now.

First, some info on Disintegrator: Disintegrator is an off-tank / support card with the following stats: 7 Mana Cost, 2 Melee, 1 Speed, 2 Armor, 5 Health and Demoralize at Level 1.

At Level 8, it gains Knock Out, doubling its damage against Stunned enemies and becoming an even more threatening card with new strategies at its disposal.

Their final stats at Level 10 are 3 Melee, 2 Speed, 4 Armor, 7 Health, Demoralize, Trample, Knock Out, and Retaliate Investing in Normal Foils: In my opinion, as a Common Tank in the Neutral Splinter, Disintegrator is just not a good investment on its own, it's a bit too niche of a card to be something to invest into as a Neutral common in Normal Foil

Investing in Gold Foils: As a Neutral common, Disintegrator will eventually hold a heavy premium as a Gold Foil card, this is because Neutrals can reliably be played across all Splinters. While that DOES make Disintegrator a good option, I believe that out of the CL Neutrals, there are better Commons to go for, such as Chaos Agent and Supply Runner.

That being said, if you've got more budget available to you, then a GF Common might not be the best choice.

Bronze: 2/10: You will rarely get to use this card effectively, and the niche rulesets that it shines in are unavailable until Bronze 1... So I'm putting a 2 here, I have never once used Disintegrator in a Bronze battle and felt like he added something to the table.

Silver: 7/10: Though niche, Distintegrator will help you get an edge in Melee Only, Sneak, and Lost MAgic, and, if you or your opponent aren't using Mylor, will be the primary decider of who wins in these types of situations: Demoralize is POWERFUL when you can't avoid it, your goal should be to nest him in a spot where he can continuously attack and survive as long as possible, gimping your opponent's melee damage.

Gold: 6/10: Again, a niche card, you're going to be able to use this card to great effect in certain situations, but often times, this card sits on the backburner, just waiting for a Melee Only ruleset ;P

Diamond/Champion: 5/10: Retaliate does a great job of keeping some value here, but I think that there are so many other really solid Demoralize cards for each Splinter at this level of play that Disintegrator isn't as highly used up here as down in the middle ranks: I do NOT Play in Diamond/Champion, so if anybody would like to throw their thoughts below, please feel free to! As a Neutral, Distintegrator has a LOT of solid choices, but let's pretend we're in ideal situations, and we're playing in something like Melee Only, Lost Magic, or Super Sneak...

I think that Mylor is the obvious choice for most, if you're facing a lot of melee, you're going to be able to put your opponent in a world of hurt by abusing Demoralize, which will allow you to capitalize on Thorns for more hits!

But, Malric/Tarsa is another really solid option, offering +1 Melee makes sure that your Monsters will have their 'usual' Melee strength even when they are hit by an opposing Disintegrator's Demoralize.

Dragons have some other, versatile options: Daria Dragonscale does the same thing as Malric/Tarsa, but offers an addition of Dragon monsters, which is always a plus.

So, he's kind of a crappy tank, so honestly you don't really wanna use him in Position 1, but you will want to place him somewhere safe, the longer he survives, the longer your opponent's melee attacks are -1 damage. This may not seem like a lot, but paired with a Shield Tank, and you could be seeing a MUCH better survival chance by keeping your poor little Disintegrator alive even just a round or two longer. An underdog battle here, I definitely should NOT have won this: I was out sped, out melee'd, and in for some serious trouble if I had missed at all. Add on to that some absolutely key Retaliates from War Cha'ang, and this was a battle that was way too close for comfort, Sandworm saves the day here with his laser focus, and Disintegrator saves my team from almost certain death.

My Silvershield + Sandworm combo absolutely eats through poor Cornealus with absolutely perfect timing: In this situation, Cornealus' higher speed made him NOT heal first turn, giving me the damage I needed to burst him down in Round 2.

This was a crazy close battle, and would've been much more in my favor if I had had a level 3 Shieldsmith, a Level 2 War Cha'ang, and a Lv. 4 Silvershield Knight, but I ended up stealing a win here by having great RNG rolls for Hits.

For me, that makes this battle a more impressive one to share: My very specific placements gave me a decent chance against this lineup, and a few Retaliates, some laser dot Sandworm hits, and a Miss later and I had stolen the victory!

As usual, I have a giveaway for you guys, and since these are Commons lately, I can do the card featured in these Share Your Battles! Somebody who comments will get a Disintegrator! You do NOT need to upvote, tip, or follow, but these all help me continue to do what I'm doing!

Good luck to everyone, the commenters will be chosen via Wheel of Names when the post pays out.

Wanna check out a giveaway hidden in my most recent Splinterlands Speculations? Check it out here Life Summoner Preview

Want to join in on a Gladius Pack opening and a chance to win too many tanks?

Wanna shrug off damage and neutralize some melee attackers? Join me on Splinterlands and play with Disintegrator, who is currently in the Starter Set you can utilize when you sign up!

if you use my link, here:
https://splinterlands.com?ref=jakkal
I'll send you 100 DEC when you sign up and get a spellbook, (as long as you show up as referred) which should help you get started via renting! Also, feel free to message me, I can answer any questions, give tips, etc.