4 Crypto Projects to Bounce Back After Corona Crash 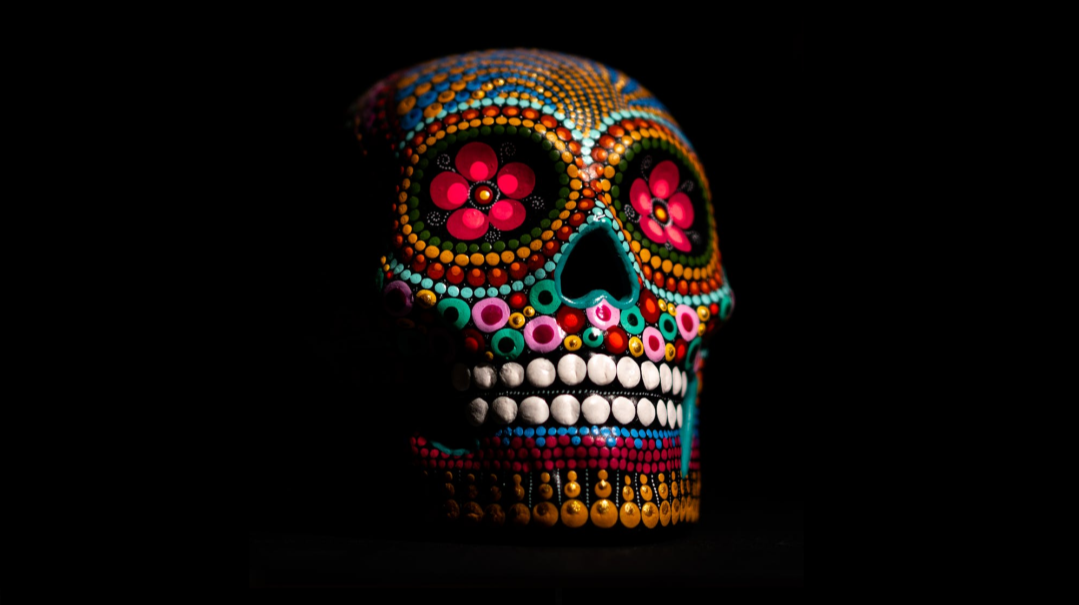 4 Crypto Projects to Bounce Back After Corona Crash

The last few days have been a bit of a bloodbath for the market. Not just the crypto market, but every other asset class with the exception of gold. Indices have taken a HUGE beating, the oil price war has sent sudden shock waves through the economy (though it has picked up a bit since yesterday’s rapid drop) and generally speaking, there is an air of pessimism floating around.

The DOW lost over 2000 points (it's largest one day drop) while the S&P 500 had its 7th largest decline since World War II, dropping 7.6%. Those are both startling indicators of where the global economy is now, and coupled with the talks of recessions that have been going on for a few months, people are not exactly in the most hopeful spirits.

Kuwait’s situation is rather telling too: the Kuwait Premier Index stopped trading mid session after it dropped past the 10% threshold just 45 minutes after the session began. This and the general tumbling of company shares because of the failed OPEC deal that had to do with production cuts. Oil dropped a taggering 24% and forecasts are very pessimistic.

Sure, crypto, which has been seen as a hedge often, is not doing so well, but there’s a good chance for it to be rebound, as it is uncorrelated (hard to say exactly but the belief is that it is) to other markets. The drop in prices we’ve seen recently is fairly common for cryptocurrencies, though it’s not surprising that people are disappointed as they were expecting the market to head into a bull run.

All hope is not lost though. Technical indicators do still point towards higher prices this year, so let’s not get hasty. In fact, some altcoins are already pulling back and heading into the greens. 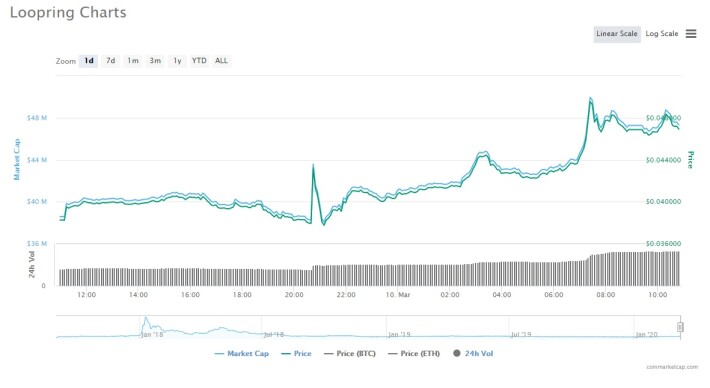 Loopring and the LRC token has been one of the better performers over the past 24 hours. It’s up an unusually good 26.25%, now at a value of $0.049. Not bad, right? Given the red we’ve been seeing all across the board.

It’s probably a little too late to catch the wave now, but what this does show is that LRC is a solid altcoin with a lot of potential. It’s easy to say that about a lot of coins, but Loopring has the tech, work ethic and milestones to back that belief up. The team has also written about the Loopring 3.0 protocol.

Loopring is building a decentralized trading protocol and DEX that has already shown great performance improvements over current solutions. The team recently released the DEX Beta and some impressive numbers to go with it. The better performance comes from the use of zkRollups, which bundles transactions and makes the trade prices go WAY down, as well as increasing throughput. It’s definitely one of the better protocols being built out there. 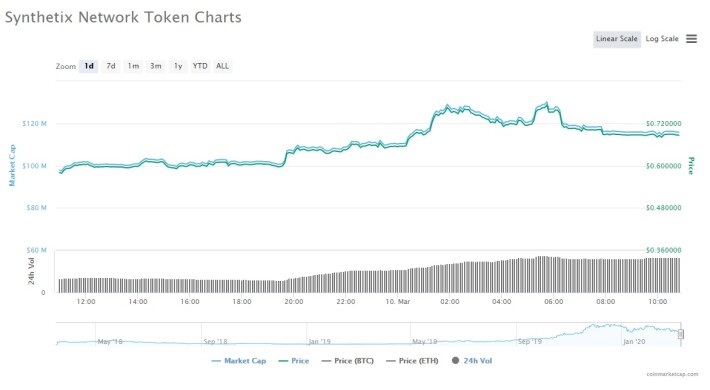 Synthetix has had a pretty good 24 hours going for it, with about a 15% increase in its price, which is now $0.69. This is still a bit off from its 30 and 90 day highs, but compared to the rest of the market, it is no doubt one of the better performing tokens. Generally speaking, DeFi focused projects and tokens do pretty well on the whole - which just underscores how significant the niche is.

Synthentix is a major player in the Decentralized Finance (DeFi) market. It is behind only MakerDAO and Compound in terms of how much it is contributing to the DeFi space, and there is about $138 million in SNX tokens locked up in the market.

The Synthetix platform lets real-world assets be transformed into on-chain synthetic assets, including fiat currencies, commodities, precious metals and of course cryptocurrencies. Assets like stocks and other derivatives are planned to be added soon. 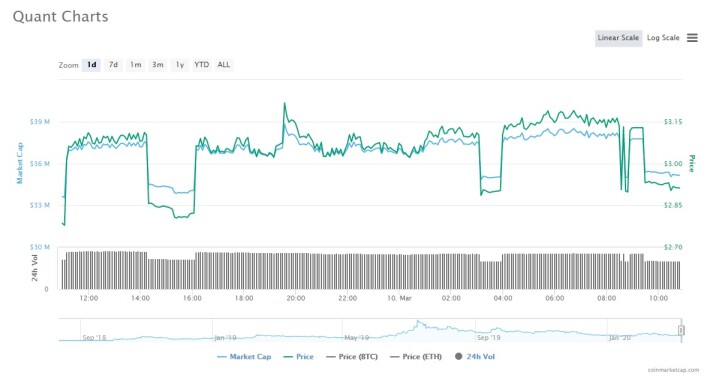 Right before March 8, which was when the market really began to slide, it was at $4. So it has taken a hit, but still not so bad as so many other tokens, which I think speaks well of the health of the token. It’s a bit up and down now over the past few hours, but on the whole I am optimistic about Quant going into the quarter.

Quant is a project that is heavily focused on interoperability and enterprise solutions, collaborating with numerous entities. The UK based project is “building the world’s first blockchain Operating System.” The two biggest solutions offered by the platform are Overledger and GoVerify. The first is an interoperability solution that has already been adopted by several entities, while GoVerify checks the authenticity of communications channels like emails and phone calls. 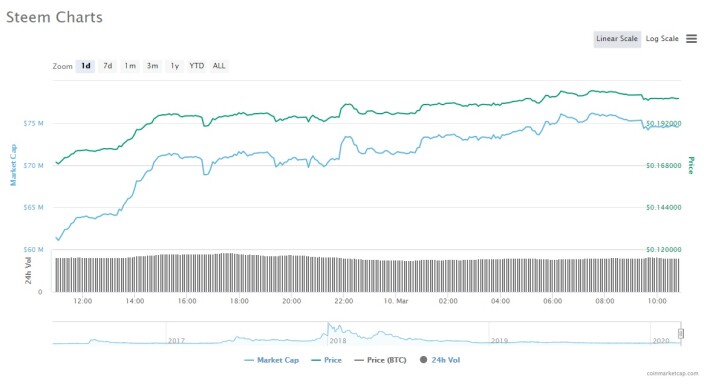 The STEEM token has been doing pretty damn well, with an 18.85 % increase over the last day that sees the token at $0.20. In the past 12 hours alone, it’s jumped from $0.14 levels - there’s definitely still some time to catch this trend and profit (though there’s no guarantee that it’s going to stay this way.) Like the other tokens I’ve mentioned, STEEM didn’t take too much of a hit from the March 8 downfall, with prices roughly at the same levels before the day.

The Steemit blockchain does not need much of an introduction, as it has existed for a while and is pretty well known among the community - and probably by readers on this content creation and publishing platform. It’s been in the news lately, what with the TRON acquisition and accusations of a takeover and all. But, for those of you who might know, Steemit is a content creation and publication platform that was created by EOS co-founder Dan Larimer.

The market is definitely in an uncertain time, and people tend to shift to stablecoins and safer assets to negate any losses. Sure, stablecoins are a solid option, but there are absolutely other tokens you can turn to make a profit in a bearish run.

It’s not as easy to spot them - but look at the tokens above. Solid solutions that are focused on bridging gaps and bringing greater decentralization, as well as a consistent track record of hitting development milestones.

It’s not a guarantee, but look at these tokens and carefully dollar-cost-average your investments and you’ll see much better performance in a bear run. 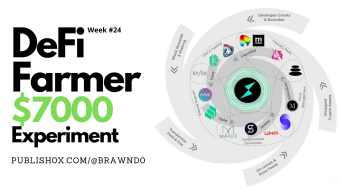 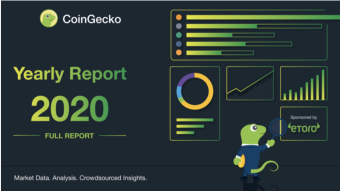 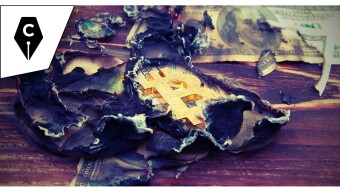