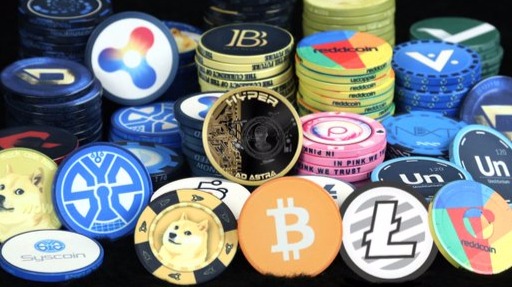 At least ten projects with a market capitalization of less than ten million dollars, promise to be a major player in the Blockchain ecosystem, according to an infographic released by cryptocurrency analysis firm Generation Crypto with data provided by CryptoRank. 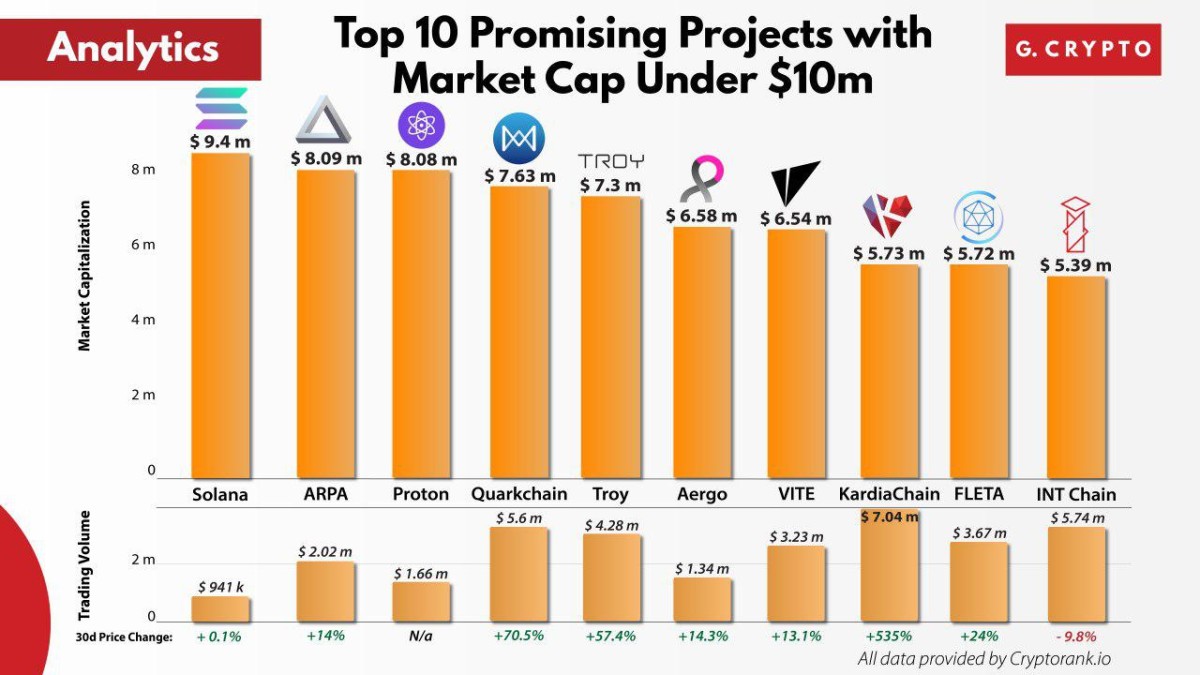 According to the previous chart, Solana, ARPA, Proton, Quarkchain, Troy, Aergo, VITE, KardiaChain, FLETA and INT Chain, they are the projects with a bright future in the cryptocurrency space.

Of all the projects, five remain listed on the Binance Exchange (Solana, ARPA, QuarkChain, Troy, VITE) and one on its decentralized subsidiary Binance DEX (AERGO). The rest are on other major platforms like OKEx, Bithumb, and HitBTC.

According to CryptoRank, all assets are positioned within the top 500 in the market, with Solana (SOL) in the best position of all, occupying box 288 with the largest market capitalization of the group. The rest occupies the limit positions of this range, in the last hundred squares.

KardiaChain is the project with the highest volume exchange in the last 30 days, with a staggering +535%, followed by QuarkChain with +70.5% and Troy with +57.4%. The rest of the project presented an increase in their commercialized volume, with the exception of INT Chain, which saw this metric drop to -9.8%.

KardiaChain's increased trading volume in the past 30 days allowed it to be above the 5M market cap limit, alongside FLETA and INT Chain, as the only projects with numbers below $ 6M.

But what do these projects promise?

With a combination of technology, use cases, and strategic alliances, these ten projects have been capturing the intent of many mid-range investors, which they have successfully pursued since launch.

While there is still a long way to go, their performance could place them within prime positions if their promises on established roadmaps and technical feasibility demonstration are timely executed in an increasingly competitive Blockchain space.

Although many tend to have a similar technological proposal, with some exceptions, they focus on specific market sectors could privilege them in the not too distant future, as we are currently seeing with Matic Network, to name a few.

To do this, let's take a more in-depth look at the keys that each of these projects have that allow them to be selected within a wider universe, such as the 10 best projects with low market capitalization.

The platform with its own architecture based on its proclaimed consensus algorithm Proof of History (PoH), is an improved version of the PBFT that gave a lot to talk about when it was listed in Binance, due to its high scalability - according to its creators - of up to 60,000 TPS.

Its PoH is a computational sequence that can provide a way to cryptographically verify the passage of time between two events, achieving horizontal scalability without fragmentation allowing rapid execution of transactions.

The project has more than 80 active third-party validators and its main technical team comes from the giant chipmaker Qualcomm, who together with engineers from Intel and Dropbox founded the project in late 2017.

Its protocol is Delegated Proof of Participation or single chain dPoS, and its main objective is to cover the world's financial markets.

It is currently located in box 285 of the general ranking of cryptocurrencies and is listed in Binance.

Its objective is to allow the rental of data and to separate the data from the property. Among its use cases of dApps to preserve privacy in Blockchain networks compatible with ARPA such as: credit fraud, precision marketing, key management systems, among others.

Your token is available on major exchanges like Binance, Huobi Global, and Bithumb.

It is a public chain dedicated to data fusion and collaboration. Its main market is high-efficiency data processing, unlocking the real potential of big data and artificial smart applications in different industries.

Its main use case is a digital marketing and traditional financial markets with decentralized applications, which allow native compliance with KYC, KYP, KYB and AML standards.

In addition, the proposal will allow users to directly link real identity and fiduciary accounts, withdraw funds and buy cryptocurrencies, and use them seamlessly in applications. Use the DpoS protocol and aim to combine the FinTech sector with crypto in the simplest possible way.

Its XPR token generated on the Ethereum blockchain is traded on 7 markets and 5 exchanges, with Bithumb being the most active of them.

It is a platform that uses Sharding as a technological foundation to scale, dividing the network into subgroups to generate the appropriate consensus using a Proof of Work (PoW) algorithm.

It has an anti-centralized horizontal scalability with network security guaranteed by collaborative mining. Its smart contract platform runs entirely on Turing and its main objective is to move the blockchain to the next generation, with a desired speed of up to 100,000 TPS.

QuarkChain has more than 70 projects in different areas, ranging from data and information systems, industrial and financial services, and entertainment and gaming platforms, among others.

The platform plans to reach the Internet of Things, Artificial Intelligence and Big Data industry, which require high transaction rates.

This platform focuses on the global brokerage of digital assets and cryptocurrencies in general. The platform's goal is to offer business tools for smart order routing across all cryptocurrency exchanges, flexible account management, settlement services, and automatic risk control.

Its namesake token is an ERC-20 token on the Ethereum blockchain, until the platform is launching its mainnet in December this year.

Troy's infrastructure relies on the collection service to improve the performance of high-frequency business algorithms. Together with Artificial Intelligence and quantitative models, the platform offers clients the opportunity to make sound decisions based on a complex matrix of data perfectly analyzed.

The company recently signaled collaboration with the COTI payment network to adopt COTI's new and advanced multi-DAG data structure to improve its scalability, with the promise of processing up to 100,000 TPS.

This Blockchain platform is a hybrid "public-private" chain that targets the business market by offering them an open source blockchain to serve use cases in the government and business level.

The objective is to develop an open source Blockchain protocol that is ready "for the company", with which companies and developers can easily design, build and implement applications on the Blockchain within the cloud, with the option of implementing control and respective performance set in the private blockchain.

Aergo runs, a double consensus algorithm, depending on the use case you want to give it. If it is private, it sets up a Proof of Authority (PoA) based algorithm called RAFT. In the case of public chains, the Byzantine Delegated Participation Test is run with fault tolerance, better known as BFT DPoS.

Its ARG token "or AERGO on some exchanges" is quoted at a spot price of USD 0.00255 (-4.19%) on 10 exchanges, mainly on Bilaxy and Upbit. Its marketCap places it in position number 402 in the general ranking of cryptocurrencies.

For now the platform is being used in Southeast Asia by any decentralized application-based platforms focused on gaming and business payment systems.

The team recently launched their native library 'libaergo' to interact with the Blockchain platform, which works under the C and C ++ programming languages, compatible with Raspberry Pi.

The platform offers a decentralized exchange, a payment platform and Blockchain applications for governments and companies. All this under the compatibility of the Ethereum virtual machine through Solidity.

They achieve greater scalability thanks to its algorithm and the entry into the action of a gateway for cross smart contracts, with more than 1460 nodes under its belt that guarantee its stability and decentralization.

Its native token is a standard generated on the Ethereum blockchain and is trading at a spot price of $ 0.0132 (+ 0.13%) in box number 401 of the general market ranking.

KardiaChain is a platform that allows you to interconnect decentralized applications (dApps) without having to duplicate them in multiple chains. It provides the infrastructure for these applications to exchange data and interact with dApps on other chains in a secure and convenient way.

This Blockchain platform offers a non-invasive connection between any public and private chain, allows the transfer of assets and data between blockchains and applications, with high processing power, a fast confirmation time, low transaction fees, among other improvements.

The native platform in Vietnam aims to build a complete Blockchain ecosystem for institutions through its gateway, infrastructure, and services. Among its real use cases is its mobile payment solution in the Asian country and complete support for the soccer community in Vietnam through its dApp On Sports, with more than 800,000 fans.

Its KAI token is trading at a spot price of USD 0.00388 (-16.73%), occupying position 485 in the general ranking of the crypto ecosystem, offered in four exchanges with the Bilaxy Exchange as the most dominant.

The company recently announced on May 21, 2020 its expansion plans in the lucrative Vietnamese eSports market valued at about USD 2 billion. To achieve this, it launched the KardiaChain e-sports incentive platform, which is a prediction game for Garena's Arena of Valor tournament in MOBA juice for Vietnamese mobile phones.

A South Korea's native platform describes itself as a public Blockchain platform that also provides technology and business support services for blockchain projects.

With its own consensus algorithm called the Proof of Formulation (PoF), a block size redesign and the use of sharding as pillars for its technology, it offers high scalability without sacrificing security and decentralization in its core network.

The platform has a high focus for the development of decentralized applications (dApps) and offers a friendly environment through its gateway system to host these products from other chains, without the need to incur high operational costs due to migration.

Its native token used in the beginning is under the ERC-20 standard, which allows it to be exchanged quickly and at no cost for its native currency, allowing this quality for any other currency of another chain that wants to use its mainnet to scale its transactions up to a maximum in actual use of 14,000 TPS.

FLETA is listed at position 425 in the global cryptocurrency ranking, and its price has seen a significant resurgence in May due to the multiple alliances achieved with major Blockchain chains such as TomoChain, Wanchain, NEO and Matic Network.

Among the real use cases FLETA is working under, includes the development of a system for clinical data records on its Blockchain, which was already successfully tested by the Seoul government in a pilot project at the end of last year.

With its recent strategic alliance with NEO Blockchain, the South Korean platform hopes to establish new use cases to meet global demand, especially in the Asian market.

It is considered to be the first state-of-the-art Blockchain communication standard and foundation application platform, called BoT. Its ecosystem aims to be the chain for the construction of a new ecosystem that integrates any IoT protocol.

Its INT token is present in the main exchanges such as Binance, Bitfinex and OKEx, at a spot price of USD 0.0128 (-0.96%), which occupies box 431 of the general ranking of cryptocurrencies.

Among its use cases, it provides solutions for traceability applications in ZTE, as well as routing for the Chinese telecom giant, in addition to participating in the low-cost vehicle registration project of the Asian nation.