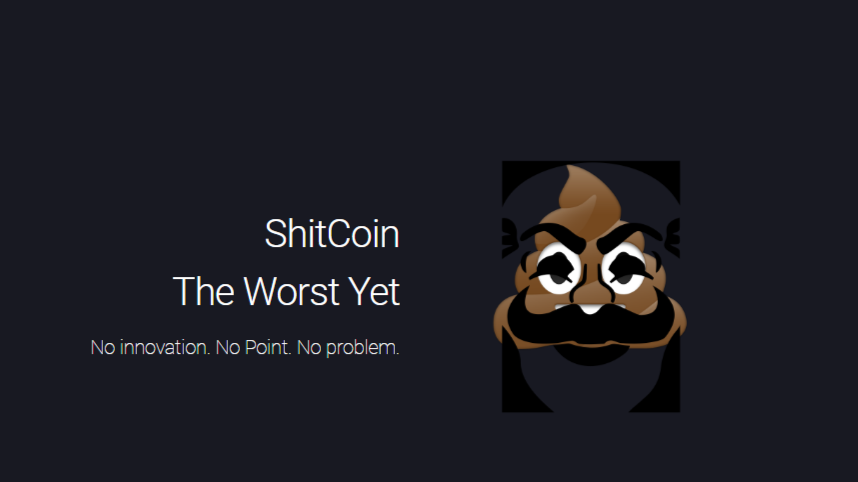 THE SHITCOIN EXPERIENCE: Absolutely pointless or not? You decide

I spend a lot of time on the internet because there are a lot of fun things to find and learn from. Sometimes it is something that will take you out of your way to just have fun and other times, it is some shitcoin you stumble into that seemingly has great potential. Well, the good part is that this is one of those shitcoins but the bad part is that you're probably not going to be getting rich off this. I'd say you're better off checking out the other cool games/Dapps found on the games category at Stateofthedapps but if you've lasted this long, nicely done. Here's some useful bit of information(or is it useless?), you decide for yourself.

The hardest part about writing this review was deducing what the silver lining in an otherwise bleak concept has to offer. The entire foundation of this Shitcoin called Shitcoin is literally based on thin air and that's putting it lightly because at least air has worth.

Here are some points about this weird "innovation".

1. Shitcoin is rated as the 16th Dapp in the games category and 74th rated Dapp on Stateofthedapps
2. SHITCOIN has no whitepaper or explanation as to why the project was started in the first place.
3. SHITCOIN team or SHIT team is completely anonymous and very unapologetic about this I must add.
4. SHIT is an ERC-20 coin
5. SHIT can be traded on ethflyer against ETH.
6. There's literally no reason why anyone should buy this token as there is no real project or explanation for the existence.

There seems to be some sort of unexplained recruitment going on. According to what is found in the image above, the SHITCOIN team is looking for specific individuals for no apparent reason. I signed up to join but haven't gotten any response from them.

I will simply say or recommend if you may that you do not become a partner in this confusing mess that has been thrown in your face. There's literally no reason to invest or believe in the project. According to the main page, the useless Coin has "pending" partnerships with a host of big companies that includes Microsoft, Google and Warren Buffet to name a few. These claims are extremely bogus and unfounded, they should not be taken seriously.

Just like I said before, I have no clue as to what the point of this platform is for, so I implore you not to participate in funding or supporting the project.

According to information found on the site(that could be fake), the final presale is over and it was also stated in the site that the dev team kept back about 1 trillion of these tokens.

The road map is completely unrealistic and irrational. It was probably randomly done as a gag or some joke.

Decentralization is just like everything on earth; it has positives and negatives. What we have here is the grey area of it that swivels between good and evil. SHITCOIN is an absurd concept with no backing or use case and only exists to be a gag. It has next to zero trading volume daily and does not look like increasing.
My mother once told me that no one or thing is entirely useless, it is just about finding what you are meant for. I will advice you not to purchase or partner with this project but at the same time, take the message out from what seems like a pointless project.