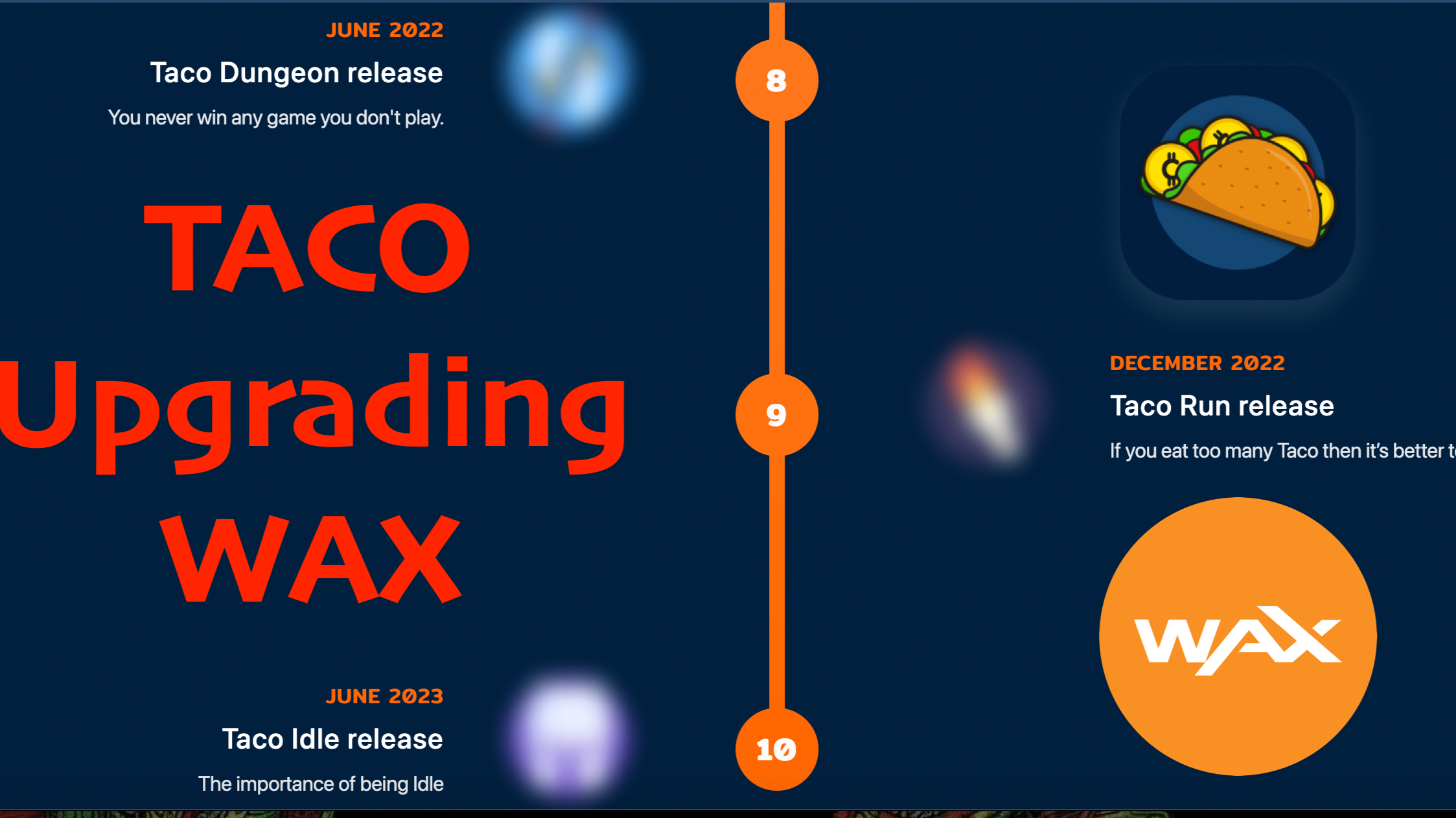 I have been using the WAX Blockchain for a while now and I think that this is one of the best projects I have come across. I know a lot of people might think differently but this is my personal opinion. There are a lot of good blockchain projects out there but WAX has always grabbed my attention. It might be because prices are fairly low for the NFT games (well most of them, some of them are in the thousands) and there are a lot of big names involved which I will go over later in this article.

The reason I think people would think differently about WAX being the best blockchain project is that there are some hoops you have to go through to get started like staking wax for CPU usage and making sure you have enough RAM. You might not know what that means if you have not used wax blockchain before but I am going to explain what it is and how easy it is once you get used to it. I also want to go over a project on the wax blockchain called Taco. Taco is one of the greatest projects I have come across. It has made using the wax blockchain that much easier.

First off I want to explain what wax is and why I think it is one of the greatest projects so far. Wax is a Blockchain project that has extremely fast transactions with little to no fees that deal with Gaming and NFTs. WAX has some of the greatest names when it comes to games and NFTs. Some of the big names are Atari, AMC, Weezer, and Street Fighter. These are only a couple of the big names that are on the WAX blockchain.

WAX has some of the fastest transactions and fees that are so small they are pretty much not there. I know it sounds like I am trying to sell you the WAX blockchain but that is not the point of this article. The point of this article is to let people know the possibilities are endless when it comes to this blockchain. There are already so many projects and games going on that if I tried to tell you about all of them this article would take days to read, so I am just going to go over the top project that is my favorite and I believe that have the most going on at the moment.

The TACO wallet also has a built-in faucet that allows you to claim free TACO every hour. You are probably wondering what you can do with TACO other than exchange it for other tokens on the WAX blockchain. You can use TACO to make the wallet better by unlocking certain aspects of the wallet or you can use it in TACO's game called Brigade.

Brigade was released just this past month or so but its NFTs sold out right after it was released. In this game, you can own venues and earn their token called SHING. SHING allows you to upgrade your property or you can even exchange it for other tokens inside of the TACO wallet. Even if you do not want to invest in their NFTs you can still play the game and earn SHING every hour. You will not earn as much as owning land or other NFTs but it is a fun game to check out and earn a little extra. There is a lot going on with this project so your best bet would be to go to the website and read through everything and see if it sparks your interest. You can use your venues to create ingredient NFTs which help you build and earn more. Or you can sell your ingredients for more TACO.

There are also NFTs called extractors. The extractors are cheaper than the venues and they earn you SHING every hour. The more extractors you have the more SHING you make.

As I said earlier the TACO wallet has a built-in faucet where you can earn the TACO token every hour. You do not earn a bunch from the faucet but enough to exchange it for other tokens or to save up for the future. The wallet itself is the best part about TACO I think. It makes the WAX blockchain much easier to use. It is the only blockchain project where you can exchange, play games, and earn all in one app on your phone or tablet.

In my opinion, I think WAX is already one of the leading gaming blockchains. Of course, there are others out there but if you are looking for speed and simplicity then WAX wins by far.

I have tried to explain this project to the best of my ability but there is so much more to this project. If you want to learn more then I would check out the TACO website to see what it is all about. If you have questions about this project please leave a comment and I will do my best to answer them. I am still learning as I go so if I do not know something I will do what I can to try to figure it out.

I hope you have enjoyed this article. I will keep trying to bring updates from this great project. I know there is a lot more to come later this year.

So now that we have talked about this amazing project I want to go over using CPU and RAM. The WAX blockchain is a little different when it comes to participating in games and other aspects of the blockchain. You need to stake your WAX for CPU and RAM to be able to use the blockchain. The more games and exchanging you do the more WAX you will need to stake. You can unstake your WAX when you are ready but once you get into a lot of games and start getting a passive income going you will not want to unstake. You can stake your WAX right from the TACO wallet app.

I know this is a lot to take in but once you get the hang of everything it is worth the time. There are a lot of projects happening on WAX at the moment and there are always so many new projects coming on board. I plan on writing about a couple of other projects that I have gotten into once I get more time. I wanted to talk about TACO because it is literally changing the way the WAX Blockchain works. It has made things easier when it comes to dealing with your games and exchanging the tokens you earn from each game. TACO is taking WAX to the next level.

Here are some of the sites I use to earn Crypto to invest in projects like WAX and TACO.

If you have any questions about any of these earning platforms or about the WAX Blockchain please do not hesitate to ask in the comments. I will do my best to answer whatever questions you might have.

Crypto is my life. I will share the best earning and learning sites out there. When I find a site that is safe and trustworthy I will share it here. Check me out at https://beacons.ai/hattyhats

I started messing with Crypto a long time ago and it has always kept my attention and made me believe in something bigger and better then the american dollar. I will keep using and learning about Crypto as long as I have free time on my hands.