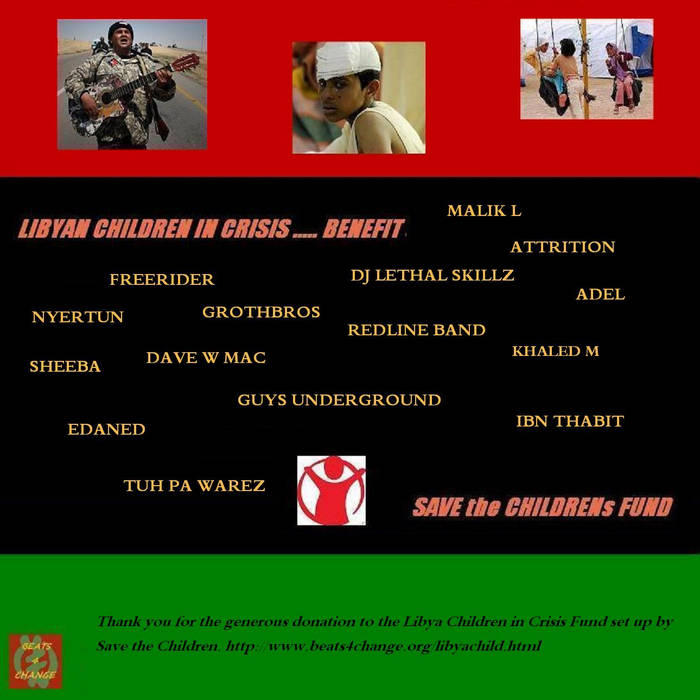 This song was played by martyred civilian journalist Mohamed Nabbous in Benghazi during the 2011 revolution, and became a rallying song for all Libyans opposed to the dictator. It was a chilling moment when 1 million people in Beghazi stood together and sang this song, as a message to Ghadaffi that they would not be intimidated to stay in fear of tyranny.

"LIBYA CHILDREN IN CRISIS - BENEFIT ALBUM" released 2011 17 artists donated songs to the album The album made it possible to donate 112 $ earned by sales on Bandcamp, and a couple of physical CD on demand through Reverbnation to Save the Children's special Libya Children in Crisis Fund

We will remain here till the pain vanish, we will live here, O my homeland,

the land of resistance, you are inside me. Despite of the enemies' plo...ts, despite

of the indignation (woes), we will aim to spread the grace, we will look

forward to rise up our ambitions by walking to the

to the highest Peaks, so let us all rise, holding our pens.

Hey I love to play guitar, and compose songs talking about issues that concern me !! You can find me under my artistname Nyertun - Founder of Beats4Change - using creative skills to raise awareness and funding for sustainable development of caring communities in which every member can live a dignified life and is respected as a valuable contributor to the process.

Music is the weapon for the givers of life In a spirit of freedom and love, with no economical calculations and political power games, let us find the inspiration, the vision and the strength to meet life in a creative sustaining way