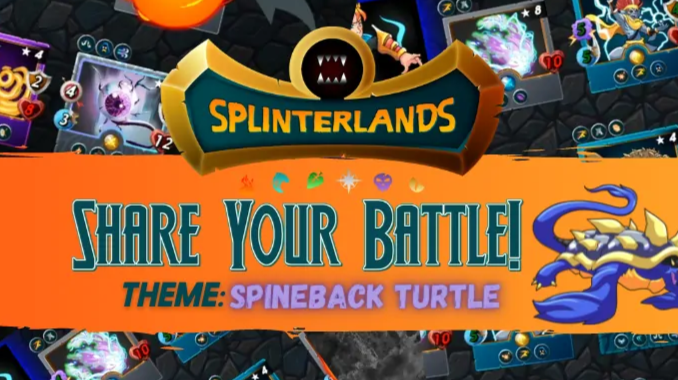 Hello, I'm posting my participation for the Share Your Battle event, this is very important for the splinterlands community and I think everyone who plays this amazing game should participate, this week the chosen card was the Spineback Turtle a Blue Common Card.

Spineback Turtle is a blue common card, usually used as a tank in low mana matches, at level 4 acquires the thorns ability. it was used a lot until the last update when it stopped being free.

Kelya Frendul - My summoner is currently the most used when it comes to using the blue deck, its bonus helps a lot in games with a lot of physical damage and the extra speed helps in dodging and the chance to attack first.

Spineback Turtle - The team star, I always use this card as a tank has good defensive stats but has very little damage. Very good in low mana matches.

Djinn Oshannus - I think it's one of the best reward cards currently, it has the void ability to resist magic attacks and a good damage together with its HP and speed we have almost a secondary tank.

Creeping Ooze - I use it whenever possible with the summoner bonus I can increase the speep difference by almost 2 points.

Furious Chicken - Always present when I run out of mana and I have an empty slot, it serves exclusively to take hits instead of my main cards.

The match starts and I see that we use the same color and summoner, the whole round was very balanced, the only good thing was the opponent's fairy that wouldn't damage my Djinn thanks to the void skill.

My Spineback Turtle was very well neutralized, the opponent's team had a lot of armor, it only served to absorb some hits, even so it fell at the end of the round.

The round starts with Djinn eliminating the main opponent's attacker, from that moment on I started to see my victory, as he didn't have enough damage to take down Oshannus. Rounds 4, 5 and 6 were all in the same format, my djinn would hit and destroy an opponent's card then receive some scratches from the ones that were left standing.

Finally came the victory, the archer couldn't attack in first position and had very little HP, just wait for the Djinn's hit to finish the match.

It was a very quiet match after the opponent's main damage was defeated, the cards that were left would hardly drop my Djinn, the following cards couldn't withstand 1 hit from Oshannus and were falling one by one, Spineback's damage was completely ineffective but manageable resist enough, the chicken wasn't even used, I expected it to absorb some sneak from the opponent but he didn't bring any.

Once again thanks to the entire splinterlands community for these incredible events.