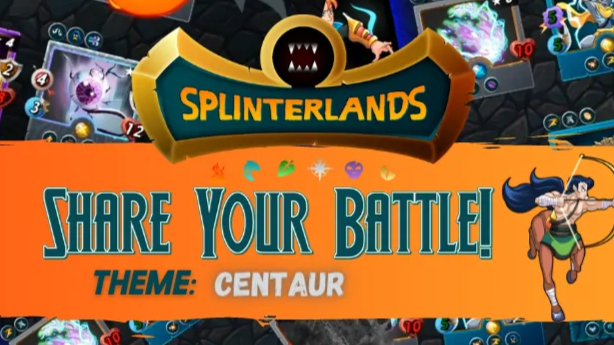 Look here again, this time bringing the Share Your Battle Theme event CENTAUR, I used this card a lot, it made me win several games and I missing it, it stopped being free in the last update and I lost the opportunity to buy one while it was still cheap, but I rented it for 1 day to remember and participate in the event even though having the card is not a requirement.

Centaur is a ranged card with moderate speed and HP, a weak attack, and has the SNIPE ability.
currently it has been played on white decks thanks to the bonus of the new summoner General Sloan, I like to use it in the last positions to absorb some hits thanks to its life and speed.

General Sloan - One of the best summoner of the new expansion, he increases the ranged damage of all his allies by +1.

Shieldbearer - My tank, I consider one of the best for this position, lots of life, good damage and good armor, and he can protect all allies using his taunt ability.

Furious Chicken - Has an empty slot and no mana? put the chicken to take a punch by your team.

Creeping Ooze - Low mana cost, slows down enemies and absorbs a hit for your team.

Centaur - Good damage combined with the summoner and considerable hp to protect Arbalast from sneak attacks.

The Round starts with well balanced teams with no difference in lvl between the cards, however as soon as I saw Arbalast's ability I realized that it is excellent to remove the Divini shield and still apply good damage in the second attack, the round ends with both tank no armor and with nearly identical HP.

The round starts with Abalast dealing 6 damage and right after the centaur finishes the opposing tank, from that moment I saw that victory was close, I still had my tank with 5 HP.

The centaur misses his attack but the arbalast again hits his two hits in a row and eliminates the opponent's secondary tank.

Now the victory came, right at the beginning and again Arbalast hits two consecutive hits and ends the match.

General Slon is here to stay, it combined with arbalast seems to be the new goal of the game, a very powerful combination for the starting ranks of the game like bronze and silver, centaur itself also became very powerful with the summoner's buff improving its only weak point that was its very low damage.

Thank you all and see you next time :)