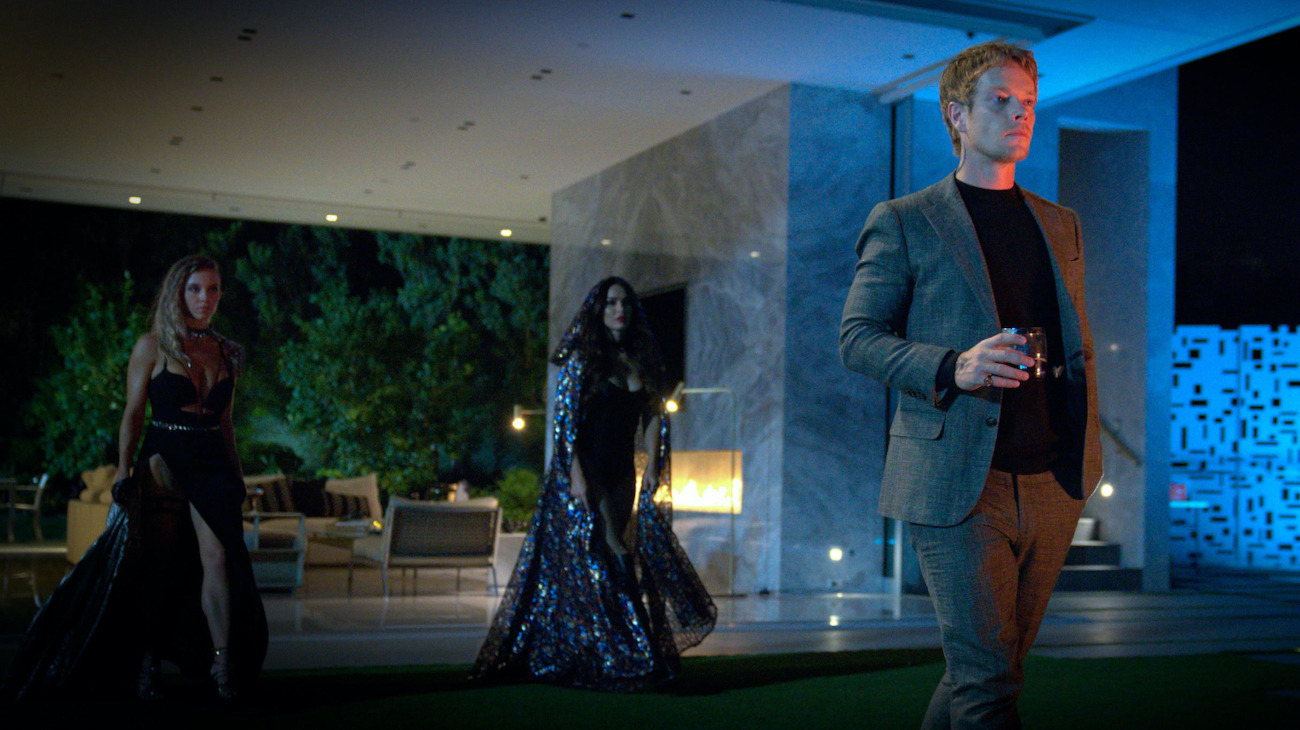 When was the last time you watched something vampire that was fresh from the oven? For me it was V Wars, where the premise was promising, but its execution didn’t seem to live up to the potential, and in the end the series (unsurprisingly) got canceled after one season. If there is something vamp-like you can think of as worthy people’s time, please let me know in the comments.

Night Teeth, Netflix’s shot at creating something new of the vampire lore, strikes me as a nice try, but ultimately failing to establish itself as memorable. It has got good ideas as far as being modern, current vamp flick goes, and it sports not just flashy cars and mansions, but also undeniably solid cast to support that ambition, yet all things vampire somehow end up being in the background, and instead we just follow gang wars, where one of the sides happens to be represented by a ruthless, egocentric and power grabbing vampire king Victor, played by Alfie Allen (Game of Thrones, John Wick). This Victor has got little in common with Underworld’s Viktor – this is modern day Los Angeles we are talking about, and we don’t see any werewolves hanging around. So when I mention ‘flashy’ and ‘modern’, I don’t mean "sparkling vampires" either, if you know what I mean.

Victor here is not one that would get a lot of screen time though. And neither is Megan Fox’s (Jennifer’s Body, Transformers) Grace or Alexander Ludwig’s (The Hunger Games, Vikings, Final Girl) Rocko. Most of the screen time is left to a trio of two actresses and one actor that altogether work surprisingly well. The trio consists of Jorge Lendeborg Jr. (Bumblebee, Spider-Man: Homecoming), Lucy Fry (The Darkness, Vampire Academy) and Debby Ryan (Insatiable, Horse Girl). The way they develop a team that goes beyond being just associates on a mission throughout the film is probably the strongest part of it. The scene with Benny (Jorge) and Blaire (Debby) having a conversation and realizing there’s something more between them than just being fitting teammates becomes like a film inside a film: suddenly it all gets a tad bit more genuine, which isn’t a point in favor of some of the Night Teeth creators because it spells out that things in the rest of the film don’t feel very natural.

So what is that that doesn’t feel so natural in Night Teeth? I’d say it’s not just one thing, but a number of things that all amount to a lack of convincing end result. Let’s see. For starters, Night Teeth being a vampire film gets to its first blood scene only about half an hour after it begins. And yet, after all that waiting we don’t get any lessons in aesthetics of the art of sucking blood, and we will end up undone in that sense when the film’s finished. The flashy everything somehow fails to make up for that. Next, even if Megan Fox and Alfie Allen get some nice fitting costumes, the rest of the characters don’t look like they would know a time period other than today. Of course, it might be the case of me thinking in cliches, but then, it’s not exactly clear what we want – do we want recently turned vampires only; do we want vampires that desperately try to be ultramodern, or do we want to add some conservatives too? This is where, in my opinion, the film struggles a lot. It's confused. We get The Kid Daytona and Saweetie as well as Blondie soundtrack wise, but when Blaire mentions 70s, and David Bowie, we all of a sudden realize how old both, she and her friend is, and at that same moment we also realize that there is nothing in the film that would link them to that time period; as characters they loose significant part of their substance and genuineness.

But then, perhaps I’m just too old to watch Night Teeth. I guess I should just go back to True Blood dvds, Queen of the Damned and Interview with the Vampire, to look for conservatism, and being really classy as a vampire, certainly not scoring extremely low in lust and hypnosis.