Today in History: The Cat’s Meow

October 18, 1963: Early in the morning over Algeria, a French domestic cat named C-341 became the first feline to reach sub-orbital space. A lesser known achievement when compared to the American chimpanzee Ham or the Soviet canine Laika, C-341 would go on to be named Félicette upon her safe return to Earth. 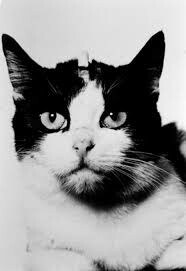 Félicette seen with her electrode implants, 1963.

Félicette was adopted by CERMA, a French precursor organization of the European Space Agency. She was one of fourteen female cats adopted by the agency for the mission. None of the cats received names until after the program ended to ensure that the scientists wouldn’t form attachments to them. Instead, each cat was given a designation like C-341 and received permanent electrode implants in their brains. This was to monitor each cat’s health throughout the program.

One cat reacted poorly to the implants and was removed from the program. The French scientists kept her and gave her the name Scoubidou, after the braid worn around her neck. She was known as the unofficial mascot for the program.

Like their human counterparts, the remaining thirteen cats received training to withstand the rigors of space, including the use of a high G-force centrifuge three-axial chair to simulate the experience of a rocket launch. By the end of their course, the cats had received over two months of training.

The day before the launch, C-341 was selected as the final candidate for the mission. At 8:09AM, she was launched into sub-orbital space. The rocket burned for 42 seconds, propelling C-341 upward with 9.5G of Force. The entire trip last for thirteen minutes. A parachute was deployed to slow the capsule’s descent and C-341 was successfully recovered alive. Media reports of the mission named C-341 “Félix” and the scientists went on the record and officially adopted the more feminine name Félicette.

Another mission in October for the program ended in failure and resulted in the death of the one of the cats. Afterwards, the program was discontinued and the remaining cats, including Félicette, were retired. In 2018, a crowdfunding initiative raised £40,000 to commemorate a statue in Félicette‘s honor. The statue will be located in Eastern France at the International Space University.

A political aficionado focusing on recent events and policy proposals. Analyzing politics from a historical and society viewpoint. A firm believer in Hobbesian Social Contract theory.

Taking a look at how our world was shaped, one day at a time.