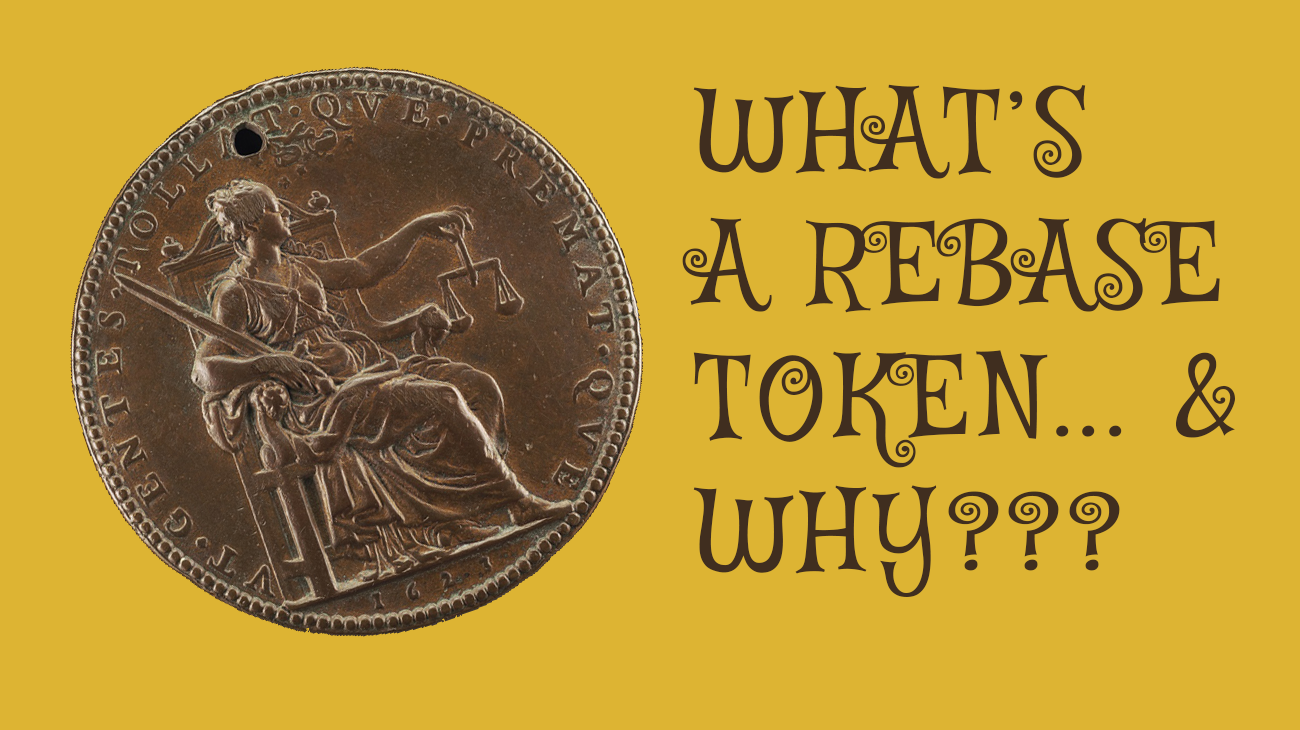 What Is A Rebase Token (& Is It Better Than A Stimulus Check)?

A cryptographic monetary system in which the supply fluctuates both up and down, as a feature, is known as an elastic supply system. The currencies associated with these types of systems are called “rebase” currencies. The “rebase” refers to the regular recalculations of this overall supply.

In response to the economic fallout from Covid-19, millions of Americans and citizens around the world received direct payments from their governments in the form of stimulus checks. This money was basically created by the central banks of those countries, backed by the issuance of debt. But there was no automatic software algorithm that determined the right amount of money to create. If you’ve been in crypto for any non-trivial length of time, you’ve likely heard cries akin to “the dollar is dead!”, in response to this type of undisciplined money printing, and a belief that crypto can not only fix inefficiencies associated with traditional finance, but perhaps the entire system as well. Indeed, an initial argument for the viability of the first cryptocurrency, Bitcoin, is its absolute supply limit of 21 million, enforced by the technology itself.

When you buy bitcoin (BTC), you either keep it in your own wallet or on an exchange. Either way, let’s say you started your portfolio with 1 BTC at $50,000 USD. If tomorrow, the price of BTC rises to $51,000, that’s what your portfolio is worth.

But let’s say you wake up tomorrow and find out that there’s actually 1.1 BTC in your wallet — and you’re sure nobody just gave you a gift (and yes, in crypto, if you’re unfamiliar, anybody can send BTC to anybody else’s wallet… but can’t withdraw it). Economics 101, supply and demand, says when there’s more of something people want, it goes down in value, and when there’s less, it goes up. If Bitcoin was a rebase token, then this would mean the price of BTC had gone up overnight. In order to stabilize the price, the system created more bitcoin. With more supply, it’s easier to purchase, and the price tends to fall back to $50,000.

And then as it falls back, the opposite occurs. The system takes away the extra bitcoin. If it were to fall below $50,000, it would take away more. You may find that you actually have only 0.9 BTC the next morning. And worse, it’d be worth less! But of course, wait enough time, and it will rise again, constantly fluctuating around that base price you bought it at (and in this imaginary world where BTC is a rebase token, yes, the system can both giveth and taketh away).

Ampleforth is perhaps the best known of the rebase currencies. Ampleforth aims to have its spot price match $1 USD, and unlike our Bitcoin example, it actually works as described above. An Ampleforth wallet is not a Bitcoin wallet. With an Ampleforth wallet, there are periods where you can be well in profit, having more Ample, worth more in USD. Yessss! But you can also be more in loss, when you have less, and it’s worth less. It’s a balancing act. Profits means pressure to sell, which drives the price down. Losses mean the price is low, so there’s pressure to buy from others, driving the price back up.

In Ampleforth, these increases and decreases in supply are distributed in tandem with the holders’ relative percentages to the total suppy of Ampleforth. So, for instance, if there were 100 million Ampleforth total, and you had 10 million of those, or 10%, and the system created 1 million more, you’d receive 100,000 more, or 10% of the new supply.

Whether or not you like the idea of a debasing, elastic supply token, it’s an interesting concept to ponder when it comes to economic stimulus. The US Dollar’s strength is commonly measured in terms of its DXY Index, its strength against a basket of other prominent world currencies. Imagine if, based on this measure, instead of a random stimulus check being cut with no real sense of what that would do long-term to the economy, US citizens, holding future digital USD in their digital USD wallets, received increases or decreases in the number of those dollars as the value of that dollar, the DXY, went up and down. It can easily be seen as a nightmarish, authoritarian scenario. Your money can be taken away at will by the government? They have complete access to your wallet? OK I get it. I’m not advocating that either! Neither am I advocating the idea that people who already have a greater ownership percentage of money would get even more of the new supply when it’s created, excacerbating economic inequality.

However, what if the stimulus were to apply only to new, special digital wallets? In other words, we’d all have our money like we regularly have it. Cash, banks, Bitcoin, Euros, gold, whatever. But say there’s also a digital, optional wallet available, and everyone can get one, and everyone that makes less than $100,000 a year gets an initial government airdrop. This wallet would be specifically for government withdrawals and deposits. Taxes could get taken out automatically, refunds could go there too. It may make life a little easier. And if there’s another economic crisis at some point, the government can not only place its stimulus money there, but also control the strength of that stimulus relative to other world currencies, thus providing a boost to those that need it, but following economic discipline that would diminish the risk of runaway inflation.

Well, it’s a thought. Economists? What do you think? Chime in!

We make content about science, tech, and interesting stuff around and in between.

As I learn things, I'll share and explain them here, in order to both spread the good knowledge, and also to reinforce my own. If there's any interesting ideas or thoughts that come out of the process, I'll put those down too.