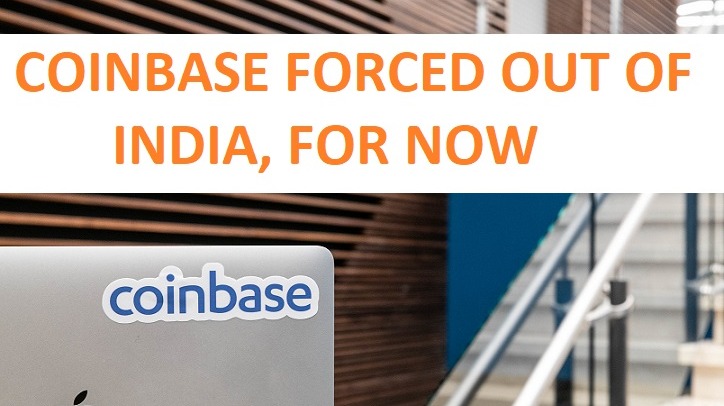 Coinbase Forced To Temporarily Shut Down Operations In India

Yet another setback is suffered for Coinbase. This now pertains to their recently opened Exchange in India. A country with a very tumultive past regarding crypto, to say the least. There have been a lot of negative stories doing the rounds in the media. Not to mention here on Publish0x. And I have previously covered two of those pertaining to Coinbase. If you are interested you can find out more by reading them here:

Is Coinbase going under? If so how would that effect its users?

Coinbase Sued Over Collapsed Stablecoin. No not LUNA...

Is the problem in Inda Coinbase fault, or is there more to it?

Coinbase opened the doors of its Indian offices on April 7th of this year. The company there offered several Fiat on-ramps. Ways for people to convert their Fiat, or normal money, into cryptocurrencies. These on-ramps are what is referred to as a UPI, or Unified Payments Interface.

But only a few days after opening its doors the company had to shut down its UPIs. When Coinbase CEO Brian Armstrong was asked about why in the Q1 earnings call, he was cited as saying:

A few days after launching, we ended up disabling UPI because of some informal pressure from the Reserve Bank of India, which is kind of the Treasury equivalent there. And India is a unique market in the sense that the Supreme Court has ruled that they can’t ban crypto.

But there are elements in the government there, including at the Reserve Bank of India who don’t seem to be as positive on it. -Coinbase CEO Brian Armstrong

This would imply that there are still some serious anty crypto forces within the Indian government. This is despite the major verdict of their Supreme Court that came late last year. There they ruled that India can not ban Cryptocurrencies. And by doing that they quashed the 2018 ban on Cryptocurrencies that was implemented in India.

What does the future hold for Coinbases role in the Indian crypto market?

Armstrong has said that there indeed are forces in the Indian Government that are trying to enact a sort of "shadow ban" on crypto. By applying pressure on the actors in the space. Despite this setback, Armstrong remains positive and he says the exchange hopes to revamp operations as soon as possible. Actually trying to work with them, despite their former actions against the company.

But I think our preference is really just to work with them and focus on relaunching. I think there’s a number of paths that we have to relaunch with other payment methods there. And that’s the default path going forward.

So my hope is that we will live back in India in relatively short order along with a number of other countries where we’re pursuing international expansion similarly. -Coinbase CEO Brian Armstrong

Despite this small setback, I think that Coinbase can have a very fruitful future in India. And India has historically had a very big interest in Cryptocurrencies. This coupled with the ban on crypto now being lifted I think has a tremendous growth possibility. Both for India as a market, and for Coinbase as a company.

What is your thought on this latest ordeal for Coinbase? Is it just another nail in their coffin? Or is it instead just a little speedbump on their road to continued success? Please share your thoughts on this topic and Coinbase in the comments below.