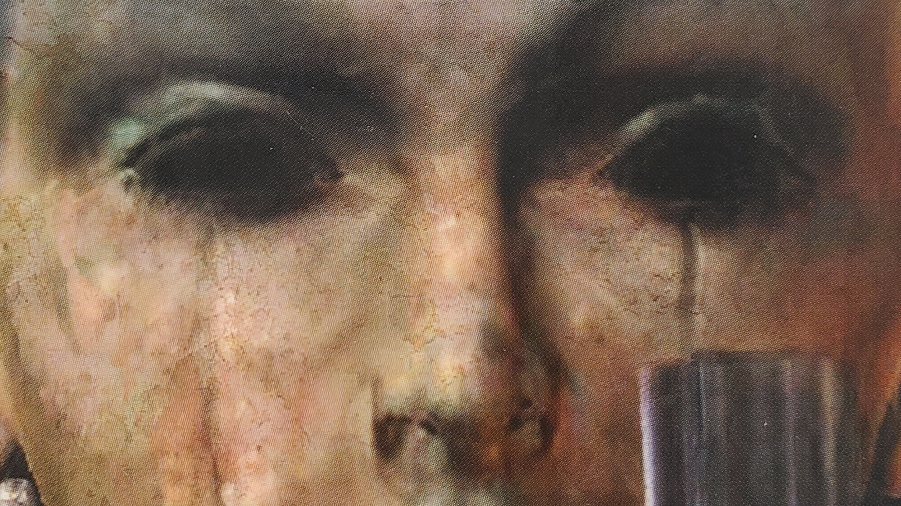 Words of Herbert, Eyes of Heisenberg

Immortality and god-like powers over the masses of cyborgs. Genetic manipulation, planned and forced sterilisation of the lower castes of the population.

These concepts, and many others, are explored in this interesting novel by Frank Herbert called "The Eyes of Heisenberg". But the author also goes somewhat deeper and yet, not deep enough. The depth I am referring to is not the one discussed in The Dragon in the Sea. Here, the depth is about this dystopian society full of concepts that could well have been explored in a trilogy of novels instead of a single one. The author would eventually write his grand space opera; Arrakis (Dune) will be explored next. But first, as usual, the pros and cons:

Published in 1966, the author Frank Herbert is great, I think. His style is concise and he often lets us know how characters are feeling without diverting too much from the main theme. Perhaps this is a reason behind how short some of his novels are. Perhaps also this can be explained by the initial publication of some of those in magazines rather than hard or soft cover editions. I bought this novel together with the Dragon Under the Sea as I was preparing to read Dune. I was not disappointed. Of course, as I mention in the opening paragraph, it could have gone deeper because the subjects at hand have much material that can be explored.

The story begins with a couple of parents who decide to use their right, guaranteed by obscure law 10927, to observe the creation and genetic formation of their child. Children being vat-grown, as is the case in Brave New World, is discussed here as well. Many concepts of Brave New World have inspired Herbert and he evens makes a quick reference to Huxley, by name, in the opening few pages - and to Shakespeare!

What we learn, from the outset, is that the Optimen, those who control society and live nearly forever, prevent their creations from multiplying. Lucky parents who are selected to have children necessitate the intervention of a Doctor in genetic engineering. This is where Thei Svengaard and Dr. Vyaslav Potter, comes into play. 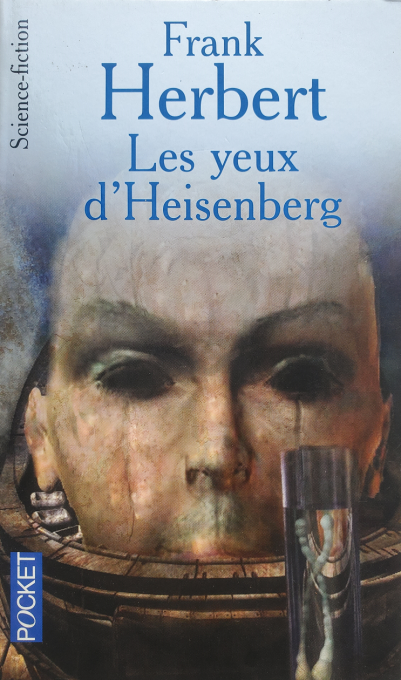 (Above: The cover of the French edition which I have read. The illustration is by Éric Scala and served to illustrate this dystopian future)

Thei Svengaard is the doctor who oversees and shapes the creation of the embryo for Mr. and Mrs. Durant. And it is only because of their rightful decision to observe the operation, under law 10927, that their presence is tolerated. And it is just barely tolerated, under protocol, because the young couple annoys doctor Svengaard as soon as he sees them.

But such is the law and the doctors proceed, we get a glimpse of their lives and environment through their mental observations. We thus see his perspective of the Durant couple. The Durant, on their side of the glass, are only observing the operation.

It turns out that science has a principle related to uncertainty when dealing with observers.

“How ignorant a man can become on a diet of managed history.”
― Frank Herbert, The Eyes of Heisenberg

It is while Seeking Truth that we stumble on what nature does best: surprise us at how resilient it is. The Heisenberg Uncertainty Principle refers to the fact that observing a particle, for instance, will modify the particle itself. In other words, if you look, you've ruined it. If you don't look, it's all fine but yet unknown. The full name of the man behind the principle is Werner Heisenberg (1901 - 1976). He is regarded as the father of quantum mechanics and it is interesting for his principle to be applied to fiction here, both on a micro-level (genetic alteration) and on a macro-level (societal change).

(Above: Illustration inside of the comic book: Othon Le Trisaïeul by Jodorowsky and Giménez)

This principle seems to permeate our reality. We can only know the position of an electron precisely if we disregard its velocity. And vice-versa; Calculate the velocity precisely and you will lose precision on the position of the electron.

With that rough knowledge of what is Heisenberg's Uncertainty Principle, we can now get back to the story by Herbert. In his story, the Eyes of Heisenberg, are the eyes of the Durant parents. By using their right and by observing the events, they have set in motion unseen consequences that contradict the assurances of the Optimen. The Optimen, after all, are purposefully preventing futures gametes from being viable. Sterilisation is planned, enforced and reliable. Or so they said... As the Eyes of Heisenberg observe doctor Svengaard, we understand that this simple fact is sufficient to cause an unpredictable outcome. To find out more, read the novel! I recommend it.

“They are the power that loves us and protects us.”
― Frank Herbert, The Eyes of Heisenberg

What would it feel like to live for hundreds of thousands of years? Another critic was providing an example of how for us, normal humans, reading a book is something you typically do once or twice in your life. The Optimen can devote a century of their life to read and analyse every little detail in a given book. They can do that for thousands of different books. Obviously, they've become blasé. They feel the Spleen of every day life because they have seen it all. Mostly, we can observe - without fear of altering them - that they behave as do all beings of power: They seek to consolidate their power and prevent uprisings of the masses underneath them.

Their caste represents a dystopia in that it feels as if these "gods" should have transcended their more biological nature but they still exhibit tendencies of absolute control and paranoia.

In the novel, the Optimen have blunted technological progress in order to protect themselves. They keep the lower caste, "the Folk" and "the Cyborgs" sterilised to prevent any unforeseen consequences. However, Chaos theory, it seems, permeates our entire universe no matter how far in the future we take a look. This story may take place at least 80,000 years in the future but we still see their plans become irrelevant in front of the Durant anomaly. It immediately reminds the reader of the events concerning The Mule in Foundation by Isaac Asimov (see my review here.) 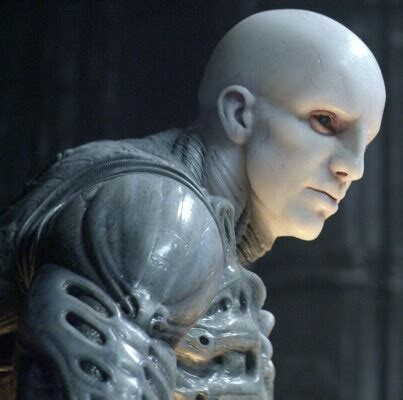 (Above: Ridley Scott's version of the Optimen from 2012's Prometheus. Genetic improvements and cyborgs are sure to form a dystopia)

I could not help but establish a similarity between the themes observed in this novel and those I have found in countless other works of science-fiction. As is illustrated above, the Engineers from Ridley Scott's Prometheus (2012) are his version of the Optimen. They too have undertaken genetic experiments and from what we learn in the movie, their experiments may not have gone as planned. In fact, the myth explored in that movie is the same as the Modern Prometheus, a.k.a. Frankenstein, by Mary Shelley (see my review here). It is not just a coincidence that both share the name of the Titan god of fire.

Other fiction also came to mind and I was reminded of Tome I: Othon le Trisaïeul, a comic novel illustrated by Alexandro Jodorowsky and Juan Giménez. 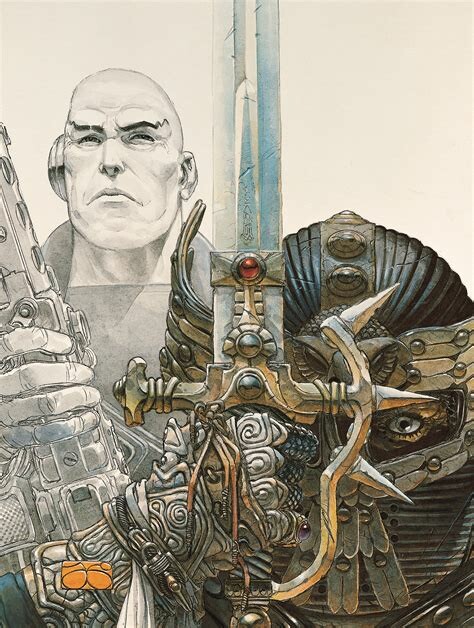 (Above: Cover illustration for the comic book: Othon Le Trisaïeul by Jodorowsky and Giménez)

In that particular fiction, which we shall explore in more details at a later date, a caste of Meta-Barons must deal with cyborg like implants to enhance their capabilities. An interesting visual novel by itself, The Caste des Méta-Barons can only spur to mind this concept of genetically altered super-humans.

As for us, inhabitants of planet Earth, we should be wary of not following dangerous eugenic practices that would empower parents to refuse genetically inferior embryos. Nature has created us with all our imperfections and it is often what creates the wonderful diversity and creativity that we are known for. Let us not follow those examples of genetic superiority, of population control and forced sterilisations.

Instead, a more lasting taste that you should get from this novel is that in the end, as in Pandora's box, there is hope.