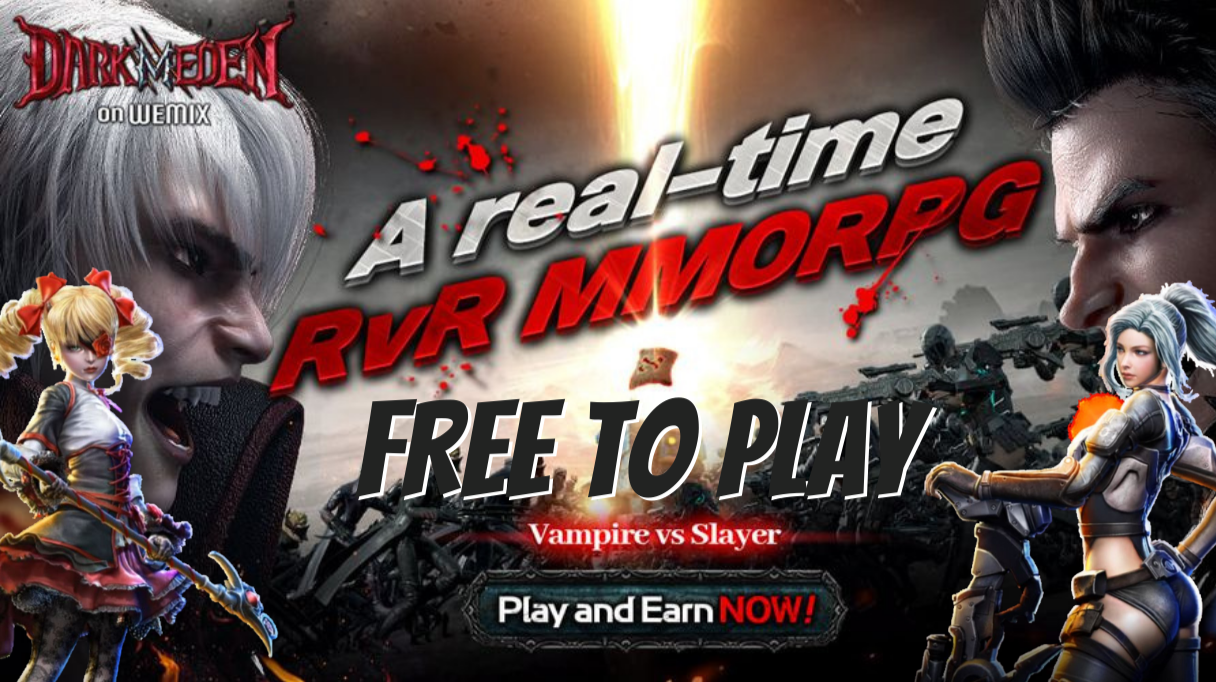 Hey guys! Looking for a new play-to-earn game to try?

Well good news for MMORPG Gamers there, in today’s article we’ll be talking about a NEW Free-to-PLAY, play-to-earn game. And it’s called Dark Eden M on Wemix, made by Wemade Connect.

Dark Eden M on WEMIX has just been officially released this month on both Google Play Store and the IOS App Store. It’s an innovative combination of traditional MMORPG and play to earn.

The game will be powered by both fungible and non-fungible token (NFT) blockchain technologies within the WEMIX platform, ensuring that users are at the cutting edge of gaming and technology.

Dark Eden M on Wemix aims to not only provide amazing game experiences but also become a tool for a player to increase their financial assets with every minute of play.

Here in the game, players will take part in the war between the rival factions of Slayers and Vampires, with realm versus realm (RvR) gameplay being a vital aspect of  Dark Eden M on WEMIX.

Before getting into the game itself, let’s talk about the characters here first.

Now as for the vampires who have very strong individual strengths with various skills.

Each character has different sets of unique skills that you can utilize in battle. Just follow the instructions and beginners’ quest to your improve combat power and get stronger. Don’t worry if you’ve never played a game like this before because the guide will help you do the quests.

Inside the game’s interface, you’ll see different menus like

In the game, there is also a roulette where you can win tier medals by simply betting at least 1000 tier medals in exchange for a chance to win x 1 up to x10 of how much you bet.

Now let’s talk about the play-to-earn aspect of the game.

You can earn tier medals by completing main quests, local quests, sanctuary war, and PVP. The tier medals are exchanged for DEBCO Token, the token which you can exchange for real-life assets.

Quite easy right? If you have been playing MMORPG Games, Dark Eden Mix would surely be very familiar to you but if it’s your first time playing this kind of game, don’t worry as I’ve said there are guides in the game that will help you understand the game fully.

As mentioned earlier, Debco is the utility token for Dark Eden M.

It’s created to give strength to a player’s character through confrontation with the opponent.

DEBCO is a new digital asset that connects Dark Eden M on WEMIX and the real world!

It has a total supply of 1 Billion and here is how it is planned to be distributed.

And as discussed earlier, there will be many opportunities to maximize game profits in the game.

You could get Debco in exchange for medals that can strengthen your characters – which is the key element to winning PVP.

PVP will allow you to earn more DEBCO, so you have to keep your position in your Realm.

In order to invade/ defend other’s territory, and to be stronger than the rival realm, DEBCO provides richer liquidity through user gameplay.

The higher the level, the more chances you have of getting medals that can be exchanged for  Debco Token.

For more info about the DEBCO Token, and how you can create a WEMIX Wallet if you don’t have one yet just visit their website darkedenm.wemadeconnect.com

Wemade Connect is a global game company specializing in game development and publishing and also an MCP (Master Contents Provider) that provides major content to the blockchain platform WEMIX.

The company’s key games that gained much popularity in the global market include ‘Everytown’, ‘Tap Tap Fish – Abyssrium’, and ‘My Secret Bistro’.

The company is currently focusing on the integration of blockchain in its key games as well as discovering new blockchain-based games.

As per their CEO – Hodae Lee.

“Dark Eden M on WEMIX is a game that can provide users with a P&E (Play and Earn) experience with an easy and clear mission, the game is expected to maximize the virtuous cycle of competition and compensation,”

“It will be a game that provides players with fond memories and entertaining moment-to-moment gameplay.”

So if you want to take part in a realm versus realm war between Slayers and Vampires then head on to the AppStore or play store and download the game now.

And make sure to follow them on all of their social media channels linked below for updates and announcements.

And by the way, here’s the info about their ongoing giveaway or the Dark Eden M on WEMIX Official Release SNS EVENT!