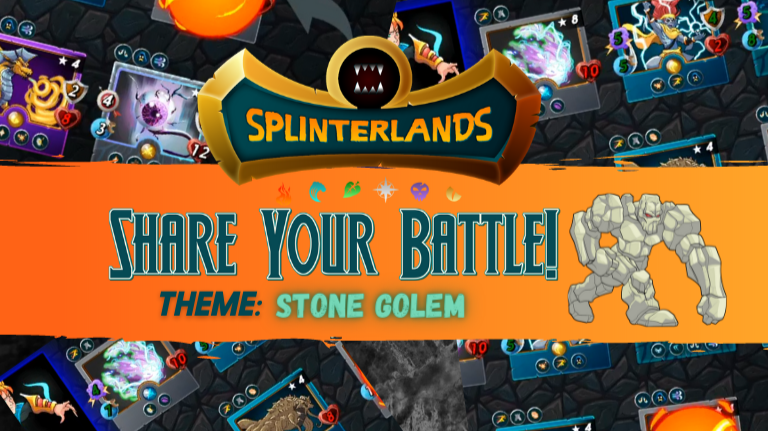 It's an Earth challenge this week - the mighty Stone Golem 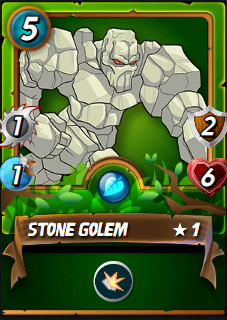 One of the main tanks for Earth (assuming you think you're not facing a magic heavy lineup).  At level one the Stone Golem has some armor, a solid life of six but most importantly the Shield Ability which reduces incoming melee and ranged attack.  Due to the Alric Magic Meta you'll probably use the Mustang Unicorn more often and if you have a levelled up Flesh Golem that may be more common too but at level one, if you're facing melee you'll do well with the Stone Golem up front.

- Odd ones out - Odd mana cards only

- Fire, Earth and Dragon only

From a scouting perspective the opposition looked like they preferred Water Magic teams which was out and Fire second. They had not used an earth team recently so I didn't know what they might do there, nor did I know if they used Dragon teams at all.

I decided to go with Dragons and gamble on them taking a Fire team with minimal magic mitigation.  Using a gold-foil Delwyn (which I'd rented to get my card power up) was nice as I'd get a DEC bonus if I won.  By using him I also got the Alric bonus so I'd definitly run a couple of magic cards.  The only downside is his mana cost and this was not a big mana cap game so there was some risk here.

Stone Golem (5) in front for the tanking;

Creeping Ooze (1) - to fill out the team and help out a little with his slow ability and to absorb one sneak or opportunity attack..

This team used 23 mana - I would have liked to use some other magic attack cards but they were mainly even mana cost so out of the game.  This team would have a solid five magic attack plus the one melee from Stone Golem.  If the opponent used a traditional fire tank (Living Lava or Cerberus) I should burn through them pretty fast opening up the backline.

I did pick the oppositions splinter well - Fire - and his team was as follows:

Malric (3) as summoner for the plus one melee;

Fineas Rage (7) - in second slot for the two melee reach attach (three due to Malric) and his speed;

War Chaang (7) - in last slot with his retaliate ability (for any sneak melee attackers), solid life of eight and ability to attack with either ranged or melee.

A solid melee/ranged team using the whole cap.  With Malric he has some strong damage output ability (four from lava, three from Fineas and three melee from War Chaang or one ranged).

Turn One - Fineas is fast so hits first taking out Stone Golems armor. Centauri Mage and Mushroom Seer reduce Living Lava to one life.  War Chaang and Stone Golem are both ineffectual against shielded tanks.  Living Lava ends the turn with a shot on the Stone Golem meaning the turn ends with Golem on four life and Lava on one life (two armor).

Turn Two - Fineas is again quick off the mark and hits Stone Golem down to two life. The Centauri Mage kills the Living Lava and the Mushroom Seer reduces Fineas to five life.  War Chaang is again useless against Stone Golems Shield.  The turn ends with Stone Golem on two life and Fineas on five life.

Turn Three - Fineas quickly kills Stone Golem.  Centauri Mage and Mushroom Seer kill Fineas.  War Chaang in between hits Centauri Mage with one ranged attack but takes one damage back due to return fire.  The turn ends with Centauri Mage tanking with eight life and War Chaang up front with seven life and a solid three melee attack from first position!  The battle is all but won as even with the increased attack from War Chaang it will be to no avail as War Chaang will get killed quickly from the big magic damage output of my team.