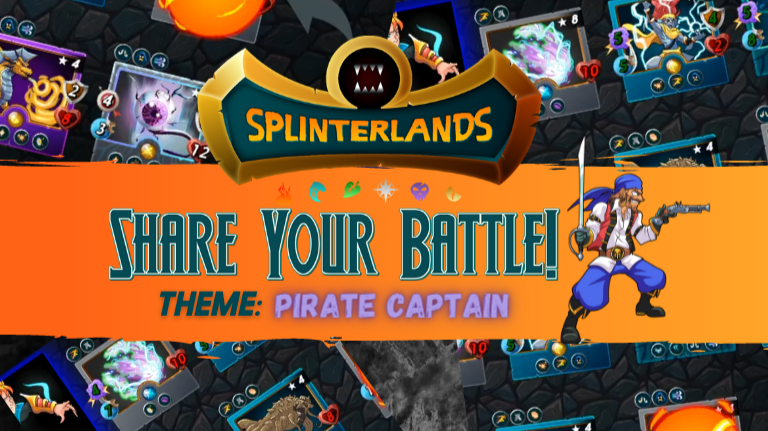 It's a water challenge this week with the low cost sniper, the Pirate Captain. 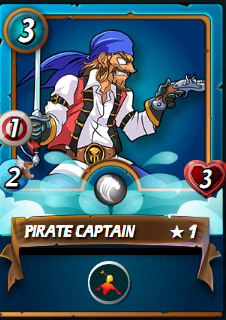 The Pirate Captain only costs three mana and has one ranged attack, three life and two speed.  He has the ability Sniper at level one and can be handy to get a few snipe attacks in.  He is often left out as the water splinter often focusses on magic attack but he can be used as a filler due to his low cost or for the snipe ability to get past the front line early.

- Rise of the commons - Common and Rare monsters only

- Healed Out - no healing abilities

From a scouting perspective the opposition looked like they preferred Water Magic teams so I tried to set up a team to counter magic for the most part.

Since healing was out I felt that Earth Splinter (with Nymph), Life with Divine Healer/Crystal Smith type teams were out so I decided to counter magic with a Bortus team with reflect cards (Android/Prismatic Energy).

Bortus (3) - For the minus one to enemy magic

Rusty Android (6) in front with two melee attack and most importantly reflect;

Prismatic Energy (8) - in second slot for magic attack and reflect but also the high health makes this card a good secondary tank;

Captains Ghost (7) - in third slot for his fairly high health and two magic;

Water Elemental (5) - for the two ranged attack (I actually meant to put in the Sniping Narwhal but the scatter brained me used the more usual Water Elemental instead as I usually use him for his heal to guard the back line.

This team used most of the cap (37/38) but had some solid magic attack, some ranged attack and with Bortus and two reflect cards would be pretty nasty for a magic team to face.

Of course as luck would have it the opposition for the first time in a few teams went Bortus and no magic attack instead!

Bortus (3) as summoner for minus one to enemy magic;

Elven Defender (8) for the solid armor and health and two melee attack;

Mantis (5) - in second slot for the two ranged sniping attacks;

Cyclops (5) - in third slot for the two ranged attack;

Gargoya Devil (7) - in fourth slot mostly for the two ranged attack I guess;

Crusteacean King (3) - in fifth slot for the heal ability;

Water Elemental (5) in sixth slot for the two ranged attack (looks like he did the same thing as me!)

A solid team that definitly was unexpected for me.  A lot of ranged attack (eight in total) could be quite painful.  Fortunately I have some quite high health cards to guard the front so that should help me absorb a few turns of damage till I can take out some of his team (hopeully!).

Turn One - For his team, the Elven Defender, Gargoya Devil, Cyclops and Water Elemental all hit the Rusty Android taking him out.  His Mantis takes out Prismatic Energy's bonus armor.  While that goes on, Rusty Android didn't get a hit in but Prismatic Energy, Captains Ghost, Wavesmith and Elemental all chip away at the Elven Defender while the Pirate Captain chips at the Mantis.  Prismatic energy is now my tank and has nine life, Elven defender still has five life.

Turn Three - My Earth elemental kicks off this turn killing the Elven defender.  Prismatic Energy gets a shot off on the Mantis before dying to Gargoya Devil and his earth elemental.  Meanwhile the Pirate Captain takes a shot at the Cyclops before the Mantis is killed by the Captains Ghost.  Captains Ghost is left with seven life and Cyclops with four life.  His attack output is reduced to just four ranged attack now as Cyclops cannot attack from first slot.  The match is all but won.

Turns Four - Seven - While he does manage to take out the Captains Ghost by the start of turn seven he only has the Water Elemental in first slot left and that does him no good since ranged cannot attack from first slot.  The Elemental dies on turn seven and my team still has the Wavesmith, Pirate Captain and Elemental left.

Although his team was unexpected and actually countered my planning well I still won primarily due to the splitting of two of his attack due to snipe from Mantis and the high health on Prismatic Energy and Captains Ghost.  A solid win - in hindsight it would have been even easier if I had Sniping Narwhal in rather than the the Water Elemental as I would have taken his second and third slots out (four ranged attack between them) much faster and this would have been a better combination with the Pirate Captain!

And that's another win in the bank!