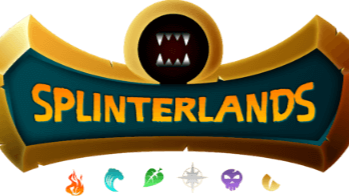 Boom Boom Boom Boom - it's never fun going up against a legendary summoner and the big bomber, Yodin Zaku can be nasty!

In Battle Library Nine I find myself up against a fire team featuring Yodin Zaku, and a lot of explosions!

- Mana cap of 36 - Most cards will be playable with this sort of cap.

- Only Fire and Life allowed

- Healed Out - no healing

This match had a solid cap to work with but life looked like a bad choice for me with Healed Out in play so it looked like I'd have to run a fire team.

Living Lava (7) up front for his shield ability

Fineas Rage (7) - in second slot for his reach ability and solid melee attack.

Lava Launcher (9) - in third slot for the three ranged damage

Goblin Shaman (3) - in the last slot to use his weaken ability and hold off a sneak attack or two.

This team I felt should be quite tanky (Lava and Fineas can normally last a while) and had a lot of damage potential (12 damage before blast) all focussed on the first slot.  Even if he used Living Lava up front all of my team had more than one attack so they would be able to get through Living Lava if I faced him.

Unfortunately I had not counted on a Boom Boom Yodin team being my enemy as the opposition had not used fire for a while!

Summoner - Yodin Zaku (7) - Explosions of course but the plus one life and ranged attack is a big help too!

Lava Launcher (9)- to tank in first slot with his big three ranged damage augmented to four and with Blast!

Cerberus - (4) - in second slot as a bank up tank I guess.  This may have been an error as no healing means Cerberus' ability is useless.

Creeping Ooze (1) - in third slot for the slow ability (and note its a level two ooze so has two life!)

Ferexia General (5) - for the ranged attack and snipe ability - Snipe is very strong with Blast as can often hit three targets in one shot!

Ettin Spearman (8) - for a powerful ranged attack and solid life to cover the back for sneak.

A very powerful Yodin team - mostly ranged attack and with the Yodin bonus capable of dealing 13 damage a round before blast is considered!  OUCH! This is not looking particularly good for me - however I have a solid team too and if I can get through the first three he'll lose damage quickly as Ranged cannot work from the front (except Lava Launcher).

Turn One - Fineas is fast so takes a shot at the Lava Launcher first. His Lava Launcher, Ettin and Fireballer all do some big damage to Living Lava whose shield ability helps a lot while his General gets a triple shot on my Launcher and the Pyromancer and Fineas on either side.  Fineas has taken a lot of blast damage and is reduced to just one life!  For my team the Launcher, Pyromancer, and Living lava then combine to take out the Launcher leaving a wounded (due to blast) Cerberus as his tank with four life and Living Lava as my tank with three life.  I drew first blood shall we say but my front line will not last long against the blast!

Turn Two - Fineas with his speed gets a shot off before his inevitable death this round. My Launcher kills his Cerberus bringing his Ooze up front.  His General shoots up my Launcher and kills Fineas and damages the Pyromancer.  The Pyromancer kills his Ooze bringing the General up to the front - good - that will reduce his damage a lot now as the General cannot hit from the front.  His Ettin and Fireballer combine to kill my Living Lava and damage the launcher.  He now has his General as tank with three life and I have the Launcher up front with two life.  Looking at the teams, Launcher and Pyromancer are faster than his guys so if they go first as expected and take out the General and the Goblin Fireballer I'll win for sure.  If I lost the Launcher it'd be stalemate as we'd both have ranged attackers up front with no ability to attack.  That being said if fatigue happened he would probably win due to the Ettins high health!

Turn Three to five - Thank goodness for Speed and the Ooze - Launcher goes first killing the General and Pyromancer goes second killing the Fireballer leaving his Ettin unable to attack at the front.  Living Launcher and Pyromancer take him out and that is that!

So what was the key to victory - a solid team with a lot of damage but surprisingly the key was probably the Ooze - killing his Ooze while retaining mine meant my speed was up enabling my team to get shots in first and kill his team out!  If we both had the benefit of hindsight he probably would have used another attacker instead of Cerberus (maybe beetle for the snipe) and I may have spread out my team a little to reduce the snipe effect or maybe used Sandworm.  Not sure - his options for winning with a small change are probably better than my options!