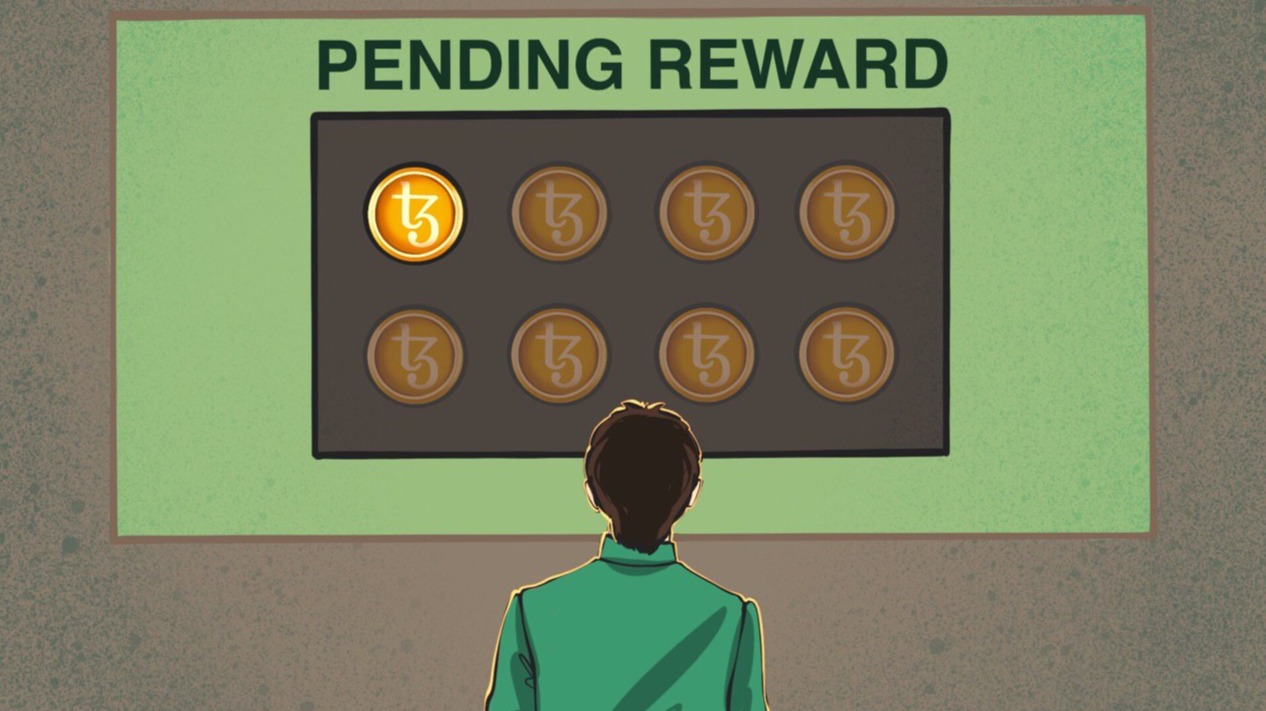 Hey everyone! Its been a while since I last wrote something. I've been kinda busy, had to put some crypto things on back burner for a little bit there. Hoping you all didn't suffer to much from the downwards motion we have been experiencing and hoping you increased your positions at some discounted prices.

Earlier I wrote up a little bit on Tezos and delegation with Tezbox (Link). I tried not to get to detailed with how to and what nots and just get to the fact with that article and about the rewards vs Coinbase. There are plenty how to's out there and didn't need to get to detailed on that but to show how my rewards are going with so and so compared to Coinbase.

I will continually update this posting as earnings reports increase. I will try to add a spread sheet and fancy stuff as more data come in. Untill then this will have to do.

Id like to take a moment to note the 25% commission fee Coinbase charges for holding. I believe it is highest for staking on Tezos. So you will earn about 5% on your Tezos compared to 6% or more from others. There are others like I pointed out that charge much less and you will earn much more. Some would say marginal but if you own 16k Tezos or so that's going to be just giving someone about $500 a year or even more depending on pricing of Tezos. So lets take a look at Coinbase.

Its worth noting somethings. First that for a while I had no tezos on Coinbase but purchased most of mine on Kraken. I did purchase somemore on Coinbase and transferred to several tezbox then rebought on Coinbase after transfer to continue the rewards information. I will show what the amount of holdings i had on CB earned for rewards here. After this all earnings will be with what I have now on Coinbase. Sorry for the confusion.

for holding my Tezos in Coinbase of 228.3117 for this demonstration I earned a total of .104 XTZ for holding it from January 14th and February 7th. That means in for about 37 days I only earned .1 Tezos.

*Disclaimer I held 4.5 Tezos from rewards on Coinbase from November 23rd to December 20th when I stupidly converted it to something else. At that time I did earn 0.0036 on January 8th. As you can see from the far right of Coinbase my lifetime rewards is almost .7 for holding just under 300 Tezos in total.

Sounds confusing with all my buys, sells, transfers, etc. Most people just buy in bulk and accumulate on earnings. However from now on my rewards should reflect my holdings for now. I do plan to be adding to my position here and maybe transferring it to my other wallets. From what I have seen most people curiously stake on Coinbase because its easier. I personally like being in ownership of my keys and crypto and not leaving it to chance on a marketplace of some kind.

My original purchase was from Kraken, not counting my Coinbase reward on their program. However I did transfer it from Kraken on January 14th to Coinbase (for whatever reason). However I do have holdings with them now and staked it with them. They charge a 15% commission fee compared to others it is less but still more than most. You will earn a reward of whole 6% rather than one that is say 5.34% 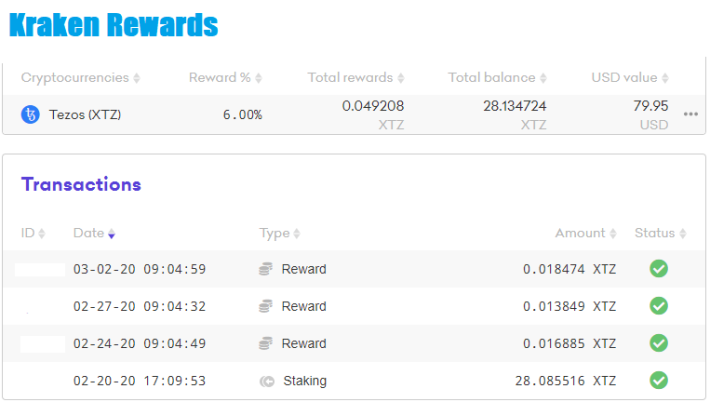 My holdings are not significant here compared to most peoples whole wallets. I just wanted to hold some here to show some earnings. So far Kraken was the first to show me earnings after I bailed on Coinbase. While I cant compare it to Coinbase after the transfer as noted above. It actually didn't take long to start earning on Kraken. While it is small amount of earnings I would have earned a little more if I had say 100 Tezos. Still for only 4 days of holding I received my first reward. The format that they show rewards i would say is appealing to some where its easy to track.

Tezgate has a rewards calculator on their end that uses their reports that is generated from their system. I simply enter my wallet address that I am staking to them and displays a graph and my rewards. Their fee is 9.9% even though it showed 7.5% when I started staking. I sent them a Tweet about it here today I also plan on emailing them. Tezgate was second to show earnings on same day Kraken did. However with the show me one fee charge me another fee left a bad taste in my mouth and may end up delegating to another. Maybe Bake TZ depending on what cycle 216 shows me for Bake TZ. 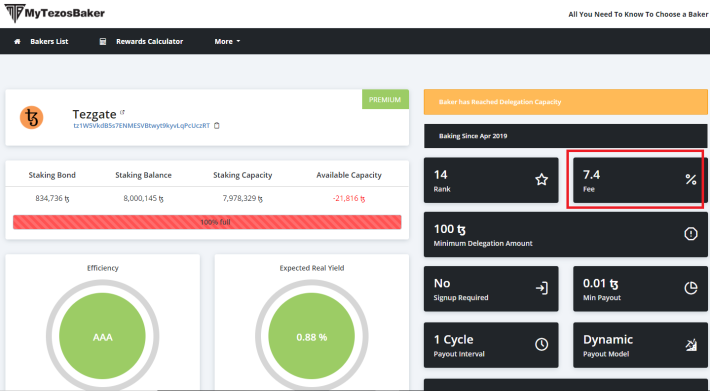 No earnings to report since February 20th. May just add this position to Tezgate or Bake TZ. I am not a fan of Binance.

I decided to switch from one I wrote that I was staking to to Bake TZ. I did this on February the 23rd. They have a 5% fee compared to others this sounds great. They claim rewards every 12 cycles. Since I staked to them on February 23rd that would be around cycle 204 and put payment to cycle 216 that being March 27th to 30th.

Sorry there isn't much to report right now but remember what I said when choosing your delegate. Do your research and find one that works for you the way you ant it to. The fact that Tezgate says one thing and does another should put people off to them.  Others I need time to get data to report. I believe I will be taking my stake off of Binance as I still do not trust them.