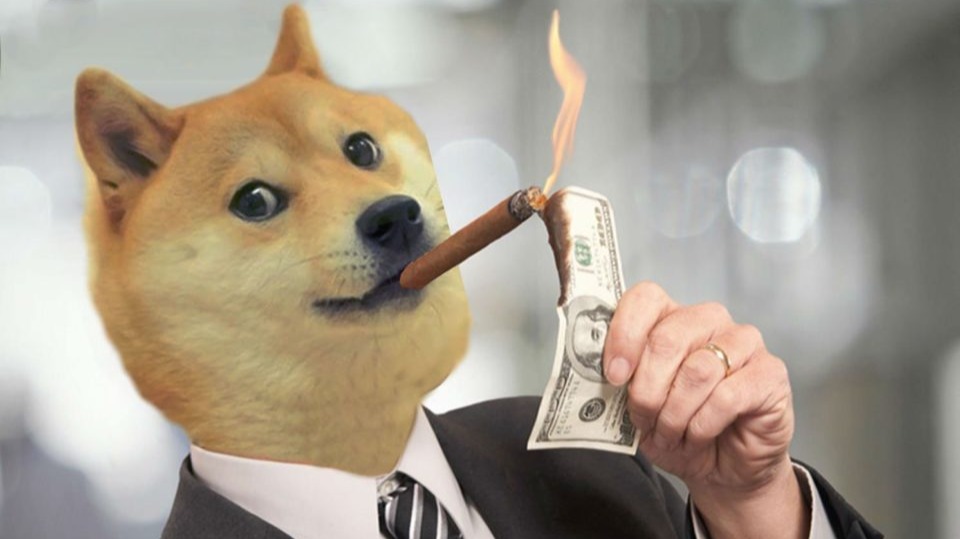 4 Reasons Why You Should Sell Your Dogecoin

Dogecoin. The meme, the myth, the legend. What started as a joke cryptocurrency years ago, made international headlines this year due to its astronomical rise of over 4,000%. Fortunes were made amongst record-breaking volatility and now, with the eyes of the world on Dogecoin, more people than ever are asking “should I buy Dogecoin?”

The short answer is no.

Due to centralization concerns, infinite supply, and severe market manipulation, Dogecoin is a high-risk investment you should try to avoid. Here are four reasons in detail along with a suggestion on how to manage a safe and profitable portfolio.

Dogecoin history is based on nothing but humor and unoriginality

Many newcomers to the crypto market either never learned the history of Dogecoin or don’t seem to care. However, any good investor knows to practice due diligence and that starts with a history lesson. In the early 2010s, the crypto market started exploding with new “altcoins.” After Bitcoin (BTC) took its rightful throne, many others out there wanted to create imaginary internet money just like Bitcoin so they could get rich quickly. Unfortunately, it was quite easy to do.

As open-source software, anyone could simply copy the Bitcoin software, change a few minor details and then launch a new coin with a new name to trade for cash. Dogecoin was one of these copycat coins and started around 2013, just at the peak of Bitcoin’s first large bull run 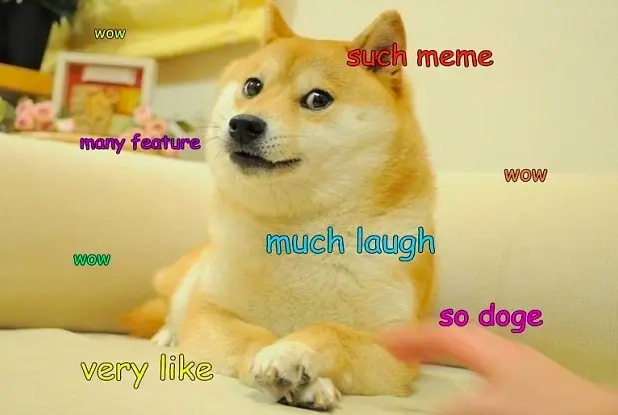 The “Doge” internet meme was massively popular at the time (pictured above) and using that as an inspiration, the anonymous creators of Dogecoin decided it would be fun to make some goofy cryptocurrency with an unlimited supply and cheap price to trade with friends and have fun with. Fans of Dogecoin started congregating on the Reddit forum r/Dogecoin where they would tip each other in DOGE for funny comments.

In the early days, Dogecoin actually was just a fun community, and r/Dogecoin even managed to raise significant funds for various charities around the world using Dogecoin. However, as most events tend to go with money, people realized there was wealth to be had in Dogecoin and that’s when the original community was replaced with those looking to make a quick buck.

Now, the owners are nowhere to be seen and Dogecoin operates completely on its own, thanks only to the free PR it gets from Elon Musk and other celebrities/influencers.

Dogecoin has an unlimited supply

Perhaps one of the most fundamental reasons to stay away from Dogecoin is the fact that it has an unlimited supply. Yes, that’s right. Just like the fiat currencies we all love to hate, Dogecoins can be printed again at will. Bitcoin, on the other hand, has a limited supply. That means you can buy some Bitcoins and if you don’t sell, the size of your holdings will stay the same forever and increase in value as the supply dwindles.

With Dogecoin though, your holdings continue to shrink unless you keep buying more due to the constant printing of additional Dogecoins. It doesn’t require a Ph.D. in economics to know why this is bad. Just a simple lesson about inflation and the supply/demand principle should be enough. 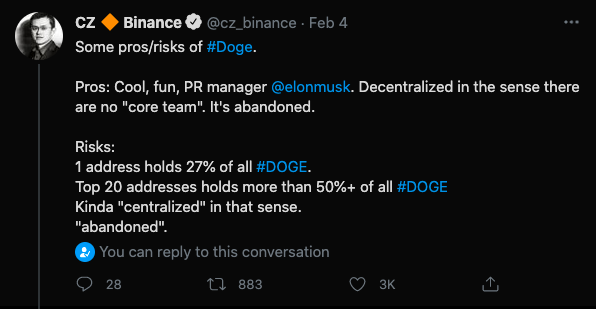 Dogecoin is seen as the cryptocurrency of the people. Its “brand” is giving retail investors a chance to accumulate generational wealth and stick it to the big Wall Street executives. However, that’s far from the case. In reality, the majority of Dogecoins are held by a very small number of people. For example, as Binance CEO CZ stated on Twitter “ 1 address holds 27% of all #DOGE. Top 20 address holds more than 50%+ of all #DOGE.”

Verifying this claim on the public blockchains on Blockchair.com, one can see that it’s true. One person holds 34.812 million DOGE which equates to 27% of the 128.233 million DOGE currently in circulation. This does not bode well for the future of DOGE as one person has too much control over the price potential.

Dogecoin’s initial founders don’t even believe in it anymore

Billy Markus and Jackson Palmer are the original creators of Dogecoin and just to show you how malicious the community has become, both Markus and Palmer want nothing to do with DOGE anymore. In 2015, Palmer fully abandoned the Dogecoin project after publicly admitting his disappointment in the community after it became flooded with hackers, scammers, and “get rich quick” schemes.

After the founders left, the community was left in the hands of these unsavory individuals. Somewhere along the way Elon Musk and his friends decided it would be funny to promote Dogecoin on social media which attracted the newly organized army of Redditors r/WallStreetBets. Together, they were able to successfully manipulate the market, pumping DOGE to new all-time highs just as they did with the GameStop stock a couple of months before.

Yes, a loyal community is seen as an impressive asset but is it sustainable? That’s a topic for another debate. For now, let’s look into safer, more transparent, and trustable solutions for your crypto portfolio.

If the Dogecoin madness is just too much for you, there are other ways to still profit from crypto without risking everything while a volatile asset like DOGE. There are plenty of reputable FinTech platforms out there backed by law and regulation.

Platforms like YouHodler for example operate under Swiss and EU law and use industry best practices when it comes to crypto storage. Keeping your funds on here means they are protected in addition to earning a passive income with YouHodler savings accounts of 12% per year.

Furthermore, they have an innovative tool called Multi HODL then uses the power of loans as leverage to multiply your crypto in both bullish or bearish markets (similar to long or short positions). Yes, the profits may not be as good as the 4,000% gains on Dogecoin this year, they are certainly more transparent, with team webinars, active communities, and free content to help you along the way.

The Dogecoin hype won’t last forever. So maybe it’s time to start thinking of a safer (but still profitable) place to keep your funds.

Passionate about crypto since 2017

Just my random thoughts about crypto. Not financial advice, but you'd better hear me out:)