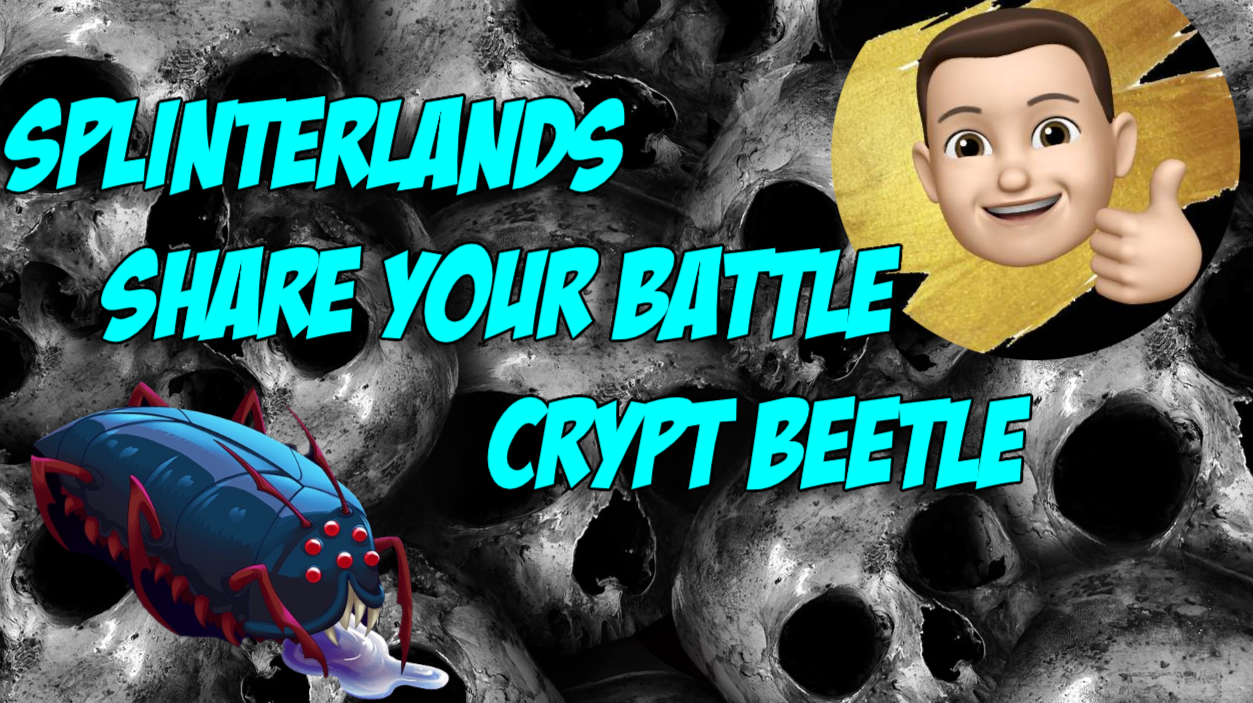 The smaller cards can still be a key to victory. The crypt beetle is a good example of this. It is always good with the team picks a card that I think some overlook. Once we use it to win the game it makes more sense to own one. Make sure you check out the Challenge here if you want to take part in this. But you have to do it soon the new deadline is before Monday. The Crypt Beetle is a strong little bug. At 3 cost and having the shield ability right away he can win some battles in funny ways. If you happen to run into a team with only 1 attack and no mages then he is an immortal tank. That won't happen often but most of the time if you use him at the right times in the right places he will take a lot of hits. I like him in little league when the teams with a lot of mages are not an option or when there is a no mana match. Or I will use him in my last spot to slow down any sneak teams. He does that better as he levels up and gets more life and armor. By the end with 4 armor and 5 life, he could tank a 3 melee sneak attack for 5 attacks. The death team has a lot of ways to lower melee attacks so sometimes he will last even longer. He can also be used as a target for opportunity monsters the same way. Poison is a weakness as well as mages so you do hope to avoid that.

This was a 29 mana no mages battle a perfect time to try to get this beetle on the board. Yet not the right time to tank the mana was too high and green and blue were on the team selection. I was going to do a death sneak team. With an archer to help kill the front monster and the Crypt Bettle to try and make sure that another sneak team would lose to me. Uraeus is also in a spot to counter a sneak team with his one armor. Shiv goes second as a second tank with 3 attacks if he falls to the front then my fast weak attacker because he might dodge if he gets upfront. Given I don't want that. The goblin is there because it was my best option with 5 mana left. Windeku is just great upfront so that is why he was there. I ran into a Kelya Deck that wasn't leveled could be a bot that might need to buy cards soon but still a good lineup. My beetle could be helpful but there are a few targets that will get hit first. I was ready to sneak but this still might work out. You can watch the full replay here

The main thing I needed to avoid here was the Serpent of Eld Dodging both my attacks. Sadly it does look like I will only kill his chicken and he will get my Uraeus. If things go well the Thorns and at least one hit will remove the Eld's Armor setting it up to die next round. That sniper on the other teams also means that my Goblins are going to take a hit and that is a bummer. Speed is a bit mixed as a few of my cards are faster than his. My skeleton having five speed is big for clearing that armor. The round ended up going pretty good for both with no misses at all. The next round would be key as a miss could swing the battle.

Okay so we are going to kill his sniper before it shoots and that means the goblin will get off a shot unless we miss. If he does hit then the eld will die and if he misses then it is rng on if I attack before the heal. After that, the opportunity monsters will kill my goblins and then start to try and kill the beetle. The rounds start with a hit on the Windeku and thorns puts eld at 2. I kill off his achers and then my goblin takes aim but misses. Then I got lucky and not only did my Windeku attack before the heal he hit and the eld was gone. After that, I did lose the goblins and my beetle lost an armor. Still not back going into round 3. Yup, I am in a perfect position to take control now. I won't quite kill the deeplurker but they won't quite kill my battle. I will only remove the armor from the healer but it sets up a pretty good round for me. The crypt beetle also shows off how it can be a great decoy.

That two health on the Deeplurker means it will take both my attacks to kill him but my guys are faster so no attack for him this turn unless I miss. With that armor gone my Windeku should kill the healer and drop the seaweed down to the front so he runds into thorns to lose his armor. What a perfect round and my little beetle who was ready to die for the team is going to live. The round went just like that with no random misses.

The seaweed stands alone and that armor says zeor so the skeleton assassin is about to do his job and kill something. A bit of a mob up round but was needed. Not a bad victory. I am fighting my way back into silver. The start of the season is always a bit hard. There are a lot more bots down here and they make a lot of good lineups. You have to make sure to play smart even if your cards are leveled up. Still, it is worth it because once you get a feel for it you are a better player. Make sure you sign up to player Splinterlands and earn money while you do it.