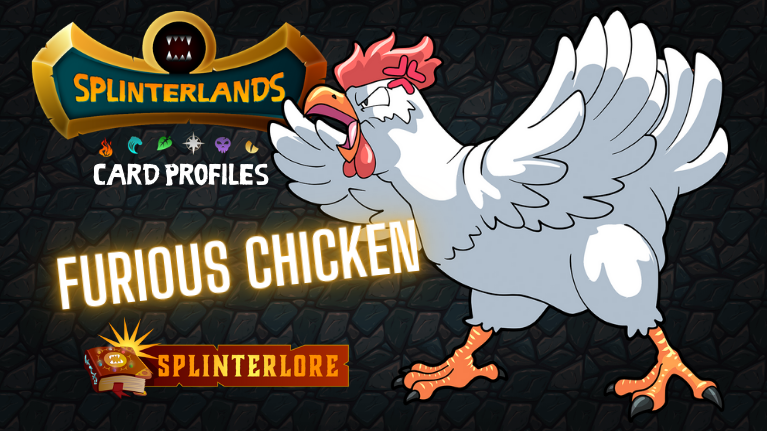 To all those who would steal our eggs, pluck out our feathers, twist off our heads and bread our by-products for frying into nuggets… beware! Your time is at hand! With furied beak and frenzied talon we shall strike back at you. And if one day you find yourselves stacked haphazardly in a paper bucket, the chickens will rejoice as they eat you with two choices of sides!

Behold now the Furious Chicken,
Defending and peckin' and pickin',
He's all of the rage,
When he's out of his cage,
to battle they're flocking and clickin'.

My Chickens are heavily skilled,
But somehow they always get killed,
But at the after-party,
We feast rather hearty,
On poultry that’s fried, smoked and grilled.

The Chickens are up in revolt,
Combined in some feather freak cult.
“Full cluck ahead!”
Was the message they spread,
But now they’re beginning to molt.

The Chickens are coming to roost,
All squawking and fury induced,
They march brave and strong
To the beak battle song,
Like something that’s been Dr. Seussed.

Size - There is nothing extraordinary about the chickens of the Splinterlands. Their size is about what you’d expect from a chicken, with enough meat on their bones to feed a small family for a couple meals. The average chicken weight is 2-4 pounds, and they stand anywhere from 1-2 feet tall. When they spread their flightless wings, they can make themselves seem quite a bit larger, but this is just for show.

Lifespan - If allowed to die of old age, chickens can live for about ten years, but this seldom happens. In the Splinterlands, chickens that are not slaughtered for their meat or imprisoned for their eggs must battle at the behest of the one known only as the Mighty Dricken, for whom they are called to fight.

Weapon - The beak of the Furious Chicken is a terrifying force of raw power. It slashes and pecks with a fury that rivals hurricanes and dragonsfire. With all the sharpness of exquisite tempered titanium, the beak leads the frightful arsenal of each chicken. If enemies are not smitten by the brutality of the beak, they are quickly ravaged by the talons of the Furious Chicken, which are themselves edged enough to slice a bronk’s flesh like butter. Beware the bitter sound of the chickens’ Ba-Kaaaawk! Seriously though, these chickens aren’t very dangerous in battle.

Habitat - Chickens live everywhere in the Splinterlands. Traditionally, they have been caged and penned, living within fences. Since many of the chickens have escaped to follow the Mighty Dricken, they are now living wild in roving poultry tribes that roam the countryside. In the wild, chickens have proven more capable than anyone in the Splinterlands would have thought. They have even begun to bully herds of peaceful grazing animals, which the chickens seem to do only for enjoyment.

Diet - Chickens can actually survive on pretty much anything they find on the ground. They prefer fertile ground where they can find worms, insects and other various crawlies, but they are quite adaptable to a number of surroundings. The poultry tribes have lately been a major annoyance to farmers. A tribe of fifty hungry chickens can tear apart a field of vegetables in just a few minutes.

Allies - There is a small number of people throughout the Splinterlands that for one reason or another, support the revolutionary cause of the Mighty Dricken. Their identities are kept secret and their deeds are covert. These poultry sympathizers are known as the chicken friendly, and they are mocked relentlessly throughout the land.

Enemies - It is well known that chickens are naturally fearful, defensive creatures. They quickly peck or slash at anyone who invades their space. What is not widely known is that the uprising, led by the Mighty Dricken, has caused most of chickenkind to swear eternal enmity against all who walk on two legs. This is ironic, because chickens also walk on two legs, but chickens aren’t that smart, so they are forgiven this confusion. The ones in the pens still play nice, but once they escape the confines of the fence, chickens are wild and dangerous.

Pastimes - Traditionally, chickens do nothing throughout the day except peck at the ground and make strange ber-kawk noises. But nowadays, the wild chicken tribes spend all their time training from sun up to sun down. The Mighty Dricken has commanded that at least one rooster lives with each chicken tribe, not only so the chickens will know when to get up each morning, but because the female bird-soldiers perform better when training within earshot of a cocky rooster. Several prototype weapons have been designed by the brilliant and enhanced Mighty Dricken and built for the chickens, such as the feather launcher and the retractable beakshaft. These weapons’ worth has not yet been proven in the field, but the chickens spend a great deal of time practicing with them.