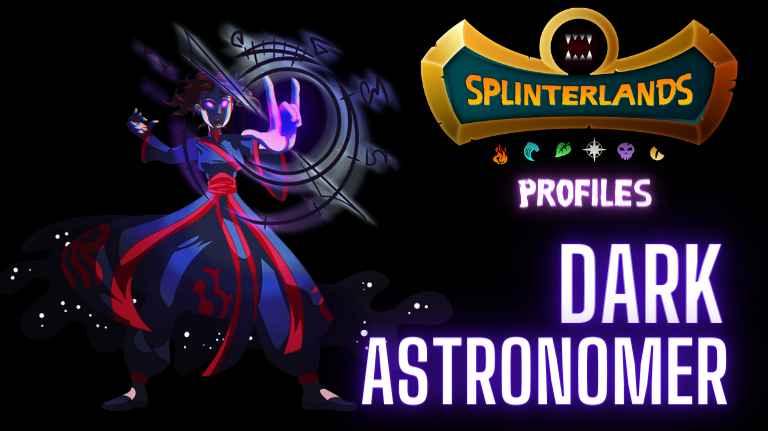 Size - Dark Astronomers are always similar in size to living humans, no matter the form they once inhabited during their living time. The reason for this is simply that human hands are necessary for the intricacies of operation needed for the tools of their science. They must be skilled in the use of lots of different devices that measure light and various wavelengths of radiation. In many of their astronomical calculations, the astronomer’s body is the primary tool employed, and if they were a puff of smoke or a giant tentacled monster of the undead, such calculations would never be possible. Regardless of their small comparative size to other monsters and warriors on the battlefield, they are able to reroute waves of dark energy, firing them toward their enemies as a dangerous weapon.

Lifespan - Despite what is assumed by most scholars of the Splinterlands, maths and sciences are extremely important to the Lord of Darkness and his Dark Eternal collective. Even the grand elevation into the dark reality can be explained through science and geometry. The secret astronomy that they practice is more ancient than anyone in the Splinterlands realizes; it can be used to predict future events and even to ward off distant threats. Because of the importance of astronomy to the culture of the Dark Eternals, Dark Astronomers are expected to serve for a term of no less than 100 years. It takes a special kind of soul to have an affinity for dark astronomy, and the Lord of Darkness wants to keep those scientists in his employ for as long as possible, even if he must disrupt their evolution into the next reality to do so. He values a single Dark Astronomer as highly as an entire battalion of troops because of the knowledge they hold, so they stay around for a long time.

Weapon - The weapon of a Dark Astronomer is darkness itself in the most literal sense. When regular people behold darkness, they simply see nothing, or blackness. To a Dark Astronomer, this is an incredibly naive approach to their work. They see every ingredient of the darkness, and everything that came together from the furthest reaches of space to make that darkness possible. In some cases they are able to gaze through time using darkness as a vehicle. Even on the brightest sunny day, a Dark Astronomer can see the power of the dark stars all around them. They can even harness that power to many ends, not the least of which is creating powerful projectiles to launch at their enemies in battle. Each Dark Astronomer must keep limber hands; use of their power depends on them creating complex geometric patterns in the air. In the nighttime, their attacks are invisible to the naked eye, but in the daytime, they darken the world around the battlefield each time they harness the power of the darkness.

Habitat - There is a compound called Nebris Locus south of Golath Zulmar and north of the Arid Forest of Khatin. The small region there, far away from the city of Utopin, is sometimes called dark’s belt, because it is supposedly the darkest place in all the Splinterlands. On the grounds of Nebris Locus, the Dark Astronomers live together and practice their craft. Even in the daytime, the walls of the compound are enshrouded with an impenetrable wall of blackness, so no one who has not been inside can even say what the buildings look like. The stories go so far as to say that even if you bring a torch to light your way, the darkness of Nebris Locus will overwhelm its light. The fire will not be extinguished, but the light it produces will do nothing to guide your path. And in the middle of the Mortis wastes is not a good place to be trapped in the dark.

Diet - As with most Dark Eternals, the Dark Astronomers of Mortis do not require food to survive. However, they have discovered a few certain supplements that grow wild in the Arid Forest of Khatin which enhance their senses and their abilities. One of the most interesting of these is the lagora bark, which when chewed grants a Dark Eternal extremely long-ranged vision. It is unknown whether the effects of lagora bark work similarly on the living because no one living has set foot in the forest in hundreds of years. Another of these enhancing items is the seed of the desica tree. Swallowing this seed allows the Dark Astronomer to slip into an unconscious state, from which they are able to travel in spirit to the dark stars themselves and find the answers to many questions. This seed has unfortunately found its way out of Mortis and tested on a living sorcerer of Beluroc, who died instantly from consuming it.

Allies - Dark Astronomers are highly devoted to the Dark Eternal collective; all their research and experimentation is geared toward advancing their brethren’s evolution to the dark reality. The only Dark Eternals they consider friends are high level sorcerers and Undead Priests, who occasionally come to visit them at Nebris Locus. There are a handful of Gloridax scientists who have learned of dark astronomy through the Moxian tournaments and are fascinated by it. Some of them have even attempted to visit the Dark Astronomers at their home laboratories. Their lives were spared, but they were turned away nonetheless.

Enemies - In the Earth Splinter of Anumün, there are many schools of astronomical study. The Centaurs of the north are experts on reading the stars to understand the world. The Minotaurs of the south are able to harness power from the sky that enhance their strength and spells. And the humans of Lyveria spend a great deal of time looking into space through massive telescopes in buildings called observatories. They map the stars and the movement of bodies in space. There are not many points that all these Anumites have in common, but they all share in hatred of the Dark Astronomers of Mortis, whom they see as making a mockery of their sciences.

Pastimes - Compared to regular Dark Eternals who go mindlessly about their routines and always try to separate from their individuality, Dark Astronomers take a surprising amount of joy in their existence. They are continually fascinated by everything that can be found in the dark between the stars. On their compound they enjoy a life that is cloistered from the typical Dark Eternal hardships of long days, thankless tasks and swift justice. Because they operate in total darkness and the Dark Lord rarely has time to visit their operations, they can more or less do as they please. It is presumed that they spend each night studying the night sky with various tools and techniques.