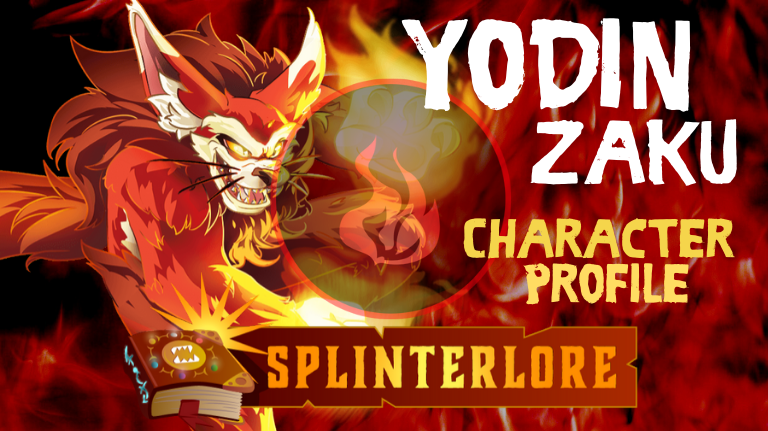 Imprisoned for two thousand years of dark,
Awaiting the ignition of a spark.
What sorcery confined, now fate released:
A vengeance-stricken, fire-laden beast
Who now will rock the Splinters to the core.
Yodin Zaku will teach us how to war. 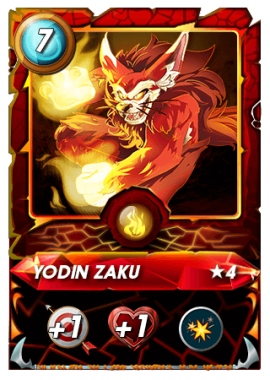 Habitat - When he finally emerged in the Unknown from the enchanted chest that held him for the last couple millenia, Yodin Zaku made a personal vow that he would never again allow himself to be imprisoned by walls of any kind. He crossed the mountains, and when he finally found a place to stay, it was in the open fields of the Ashlands. Now he keeps a modest camp there. Zaku has nothing to fear from the wild dogs and simple predators of the Ashlands, and he can only sleep soundly when he can feel the wind on his face.

Size - Yodin Zaku (in his ancient feline form) stands about twice the height of a man, with a mass of well over 100 chickens. In battle, the Belludae used to possess the ability to swell to the size of giants. Few people in the Splinterlands have any memory of the Belludae, and even fewer know that Yodin Zaku has the same legendary skill.

Lifespan - In the times long before the Splintering, there was a proud and warring race called the Belludae, the Demons of War. They typically lived short lives, dying gloriously in some conquest or another. Such was Zaku’s destiny some 2000 years ago, but this destiny was cheated by an ancient sorcerer who trapped him in an enchanted box. His essence was trapped, through the Splintering and the nearly thousand years that followed, until he finally escaped. There are other Belludae trapped in the Unknown of the Burning Lands, Yodin’s brothers and sisters. He will come for them, and together, they all still may die in glorious conquest.

Weapon - With his notorious fists of fire, Zaku needs no weapon, but once upon a time, he had a weapon. It was a mighty ball-and-chain named Julvo that used to sing joyfully through smash and slaughter of Zaku’s enemies. Julvo was cruelly knocked from Yodin’s hand just before he was trapped in the chest on that fateful night; he knows not where it landed nor what became of it. But the connection between Zaku and the legendary weapon is strong. He can feel that some imposter has been wielding it. Julvo draws him near. Soon they will be reunited and the Belludae will have the power needed to make their final march.

Diet - Yodin Zaku’s preferred meals have feathers; he is a cat after all. He makes weekly trips to the markets of Azad to buy a wagon full of chickens. The children of Azad cower in terror when the huge Demon summoner walks into town. When asked why he doesn’t simply raise birds of his own, Zaku replied “they come cheap, and chickens is more trouble than they worth.” He also chases small animals on the open Ashlands, but that is more for enjoyment than food. He rarely eats what he catches, especially with all the mysterious mutations and contagions that have been growing since the Untamed prophecies were discovered.

Allies - Yodin Zaku’s truest friends are still trapped in enchanted items scattered throughout the Unknown of the Burning Lands. They are the ones who fought beside him so long ago in the Thousand Year War, and he will make them free. The Dragons of Mount Mox have been extremely welcoming to Zaku as he entered the arena circle, and he has graciously accepted their generosity. He is a Gloridax dream: Righteous, but perfectly susceptible to gifts, bribes and flattery. Behind closed and guarded doors, the great Suam Khepri even came personally to introduce herself to Zaku at Mount Mox. This is highly irregular. The Suam is usually so paranoid of assassination attempts that she refuses to leave the confines of her palace.

Enemies - During his time trapped in the chest, Yodin’s hatred for the Efreet who imprisoned him only grew. They had been the most recent enemies of his people, and he was disgusted to find that in this future world, they controlled the Fire Splinter under the name of the Torch. The Efreet scum claim acceptance and diversity, then they enslave all who are different than themselves. The Belludae lost the Thousand Year War, and though Yodin may never be able to forgive himself, he may be able to redeem himself.

Work - To make a living in the Burning Lands, Yodin uses his formidable summoning skills in the Mount Mox tournaments. Summoners in the tourneys typically aren’t paid a salary, but gifts and amenities are always heaped by the Gloridax onto those who win. Zake does not have extravagant living tastes, so he simply requested that these amenities be paid out in seed coins.

Pastimes - Yodin Zaku’s favorite activity is running, which he does not only for exercise, but for the great rush of freedom he is able to feel. For all those centuries that he was trapped in a small box, it was the impulse to move that was truly torture. Zaku is not afraid of stillness, but he must also constantly remind himself that he is free to run wild.

Yodin Zaku was a War Demon of the times before the Splintering so long ago. He was a hybrid child born of two warring races, the Efreet and the Bulludae, the Demons of War. But he never perished. His being was imprisoned in an ancient artifact that preserved his life, and now, nearly a thousand years after the Splintering, Yodin has opened his eyes and risen from his bondage.

His parents married in secret, since their bondage was strictly forbidden by the Great Orderlies. The Efreet and the Bulludae had been at war for thousands of years, but the two noble families of both parents had themselves been locked into an especially bitter feud for centuries. When the relationship was finally discovered by the Estath authorities, the result was quite unexpected.

Their union of the unlikely couple compelled the leaders of the two warring factions into diplomacy. After wildly successful peace talks, many generations of peace and plenty followed. There was a great mingling of the two races; together, they accomplished great things, and had their growth not been suddenly halted by the catastrophic Splintering, the Estath would have driven the world forward in prosperity.

Yodin’s mother’s name was Eha Balan. She was an expert in the most ancient arts of fire, some of which are unknown to even the high priestess Mitreyya. Eha was considered throughout the Estath lands to be the best sorceress in her class. His father was an old and endlessly wise Demon known as Zer’geroth Mozran; with his mighty wings, Zer’geroth could summon powers greater than those of any Splintral Wizard.

In the era of peace, Yodin was born. As he grew his mother and father infused their ancient arts of magic and strength into what became a vast arsenal of knowledge. His mother taught him how to wield fire to an unmatched degree, and his father taught him to strike with unparalleled vengeance. Through this extensive training and deep counsel, he came to be one of the most famous Belludae Demons to ever walk the Splinterlands. He quickly rose to the rank of Great Orderly.

The Great Orderlies were the overseers of defense, offense, war, peace and prosperity in the Estath-lands. They were the silent but deadly, ever-present over-watchers. Their punishments were swift, and they brought havoc upon all who challenged them. In spite of all their toughness and the fear they evoked, the Great Orderlies also held a boundless love for growth and a deep compassion for all the living.

As with all times of peace, it came to a sudden end at the whims of a single jealous shaman. The histories do not remember his name, but the war, once rekindled, threatened the existence of both races, Efreet and Belludae. The jealous shaman captured the consciousnesses of several powerful Demons, taking over the Estath state and plunging order into turmoil and violence. The Great Orderlies were hunted down one by one and slaughtered. Those Orderlies who could not be killed were imprisoned by unbreakable enchantments in boxes, chains and cages. In a battle against a vile Efreet sorcerer, Yodin’s parents were vaporized before his eyes by the most powerful spell of lightning he had ever seen. From then, Yodin was on his own. His life became war, and he never stopped fighting until he was finally imprisoned in an enchanted chest by another Efreet sorcerer (Yodin could not be vaporized). The war, which lasted all the way until the great Splintering, became known as the Thousand Year War.

As the years passed after the Splintering, the stories of the Thousand Year War and the (presumed extinct) Belludae Demons faded from memory in the Burning Lands. The new order was the Ferexia and the Torch; they cared little for history while there were enough problems in the present. The sealed souls of the Belludae Demons have sat quietly in a region of the Burning Lands that is utterly deserted, a land which is now called The Unknown, simply waiting to be awakened.

Yodin, being trapped while fully aware, knew of his predicament. In the last few centuries of his soul bondage, he could feel the enchantments that held him growing weaker. Finally, when he could take no more captivity, Yodin Zaku used all his magical energy to summon the most powerful forces within his reach. His unlikely call was answered by a Giant Roc gliding high through the Burning Lands’ skies, who swooped down and picked up the enchanted chest in its great talons. The massive bird then flew to the precipice of Glover’s Steep, from whence it dropped the chest. When finally it struck the rocks below, the chest was broken into many pieces and the binding enchantments were shattered. Yodin Zaku’s soul began to rise, and he morphed into his favorite physical form, which he still remembered well.

Standing alone in the Unknown, Yodin looked out over the deserted lands that were once thriving with his ancestors. A tear fell from his feline eye as he thought about his long-gone mother and father, sizzling into steam as it landed on his whiskered cheekbone. Thousands of years had passed since the world Yodin knew. With raging fire in his heart and the taste of Efreet blood’s memory in his teeth, Yodin Zaku began to make his way west, toward the Molten Mountains and the cities of the Burning Lands. He walked faster and faster, eventually breaking into a full and wild run of freedom. As the air whipped by his face, Yodin hoped that there were still people left to conquer.