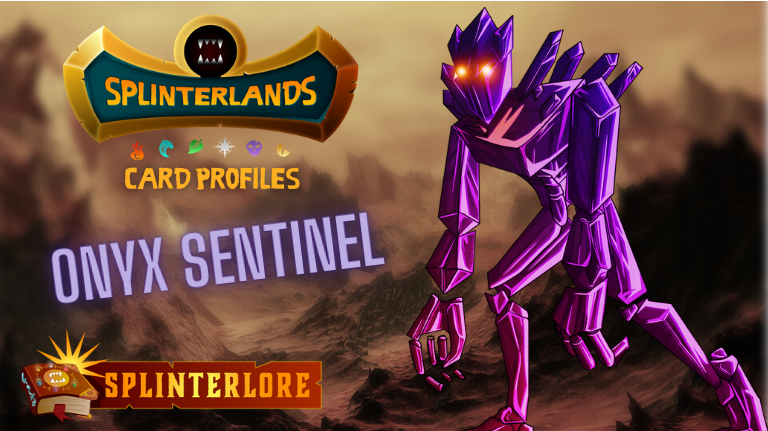 Deep in halls of chalcedon,
The guardian awaited,
A future age will carry on
What fools have created. Size - The Onyx Sentinel seems to be the largest golem in existence, larger than any of the Flesh Golems or Stone Golems of Anumün, even larger than the massive Bone Golems of Mortis. The legendary Chain Golem may be heavier because it is made of iron chains, but the Onyx Sentinel is much taller. When it emerged from the tunnels of the Molten Mountains it had to crawl, and in many places it caused uncontrollable cave-ins due to its immense bulk.

Lifespan - The Sentinel is a creature of ancient legend. It was thought only a myth until it was witnessed by daylight for the first time when it finally found its way from imprisonment in the mountain caves, hundreds of years after its Dwarven creation. Golems only die when they are destroyed, and golems such as this one made of solid stone will never be easily destroyed. A force large and powerful enough could certainly break the Onyx Sentinel into pieces, but it is difficult for anyone to say what would cause the monster to stop living. And for now, it is not causing any trouble, but simply standing as a protector to the tunnels from whence it came. This is why the Torch has not bothered sending an army to destroy the Sentinel. If at any point in the future they get the idea that it works against them instead of for them, they will quickly obliterate it with all the power that is necessary to do so.

Weapon - The Onyx Sentinel is telem suum. Telem Suum beasts are so called because they act as their own weapons, never needing to carry anything to make them more powerful. Luckily, the Sentinel has so far proven to be a defensive beast, rather than an attacking one. If it decided to go on the offensive, it would certainly do significant damage, crushing everything in its path until something or someone brought it down. When attacked, it quickly retaliates by smashing its great stone fists on top of the attacker. In Moxian tournament battle, the Sentinel has also demonstrated the ability to release sharpened crystals from its back like the quills of a porcupine. It is unknown whether these spines would regrow or replenish themselves naturally, and no one is eager to find out.

Habitat - The Onyx Sentinel always stands guard outside evrytero, the largest-mouthed cave into the caves of the Molten Mountains. This is where it stopped after blazing a destructive path up through the caverns from Serpent’s Sling and through the Kobold Suburbs of Zariba Cave City. Before that, it was simply one of the many hidden things that were buried deep beneath the cave civilizations of the Burning Lands, reminders of the conquests, adventures, secrets and failures of people past. The Onyx was originally created in a Dwarven city that has since been buried. It has been theorized that the Sentinel was itself the reason for the collapse of that city, which has become the foundation beneath the diamond mines south of the Kobold Suburbs.

Diet - Golems require no food, except in the rare instances that they are made of living tissue. Because the Onyx Sentinel was created entirely out of onyx crystal, it is an inanimate golem, brought to life through unknown magical means. There are many possible explanations for how this golem was given life, but miners of the Burning Lands are more interested in finding the location of such huge masses of onyx crystal than explaining the origin of the monster’s strange life.

Allies - In spite of the fear it strikes into anyone who beholds it, the Onyx Sentinel seems to be a friend to the Burning Lands. As soon as it reached the surface and daylight, it began standing guard as if it was simply reporting to its post and doing its job. It did create a great deal of chaos on the way out of the caves, but now it has been determined by the Torch that all casualties and cave-ins were accidental. The Gloridax masters running the Moxian tournaments have grown quite fond of the Onyx Sentinel as a crowd pleasing monster in the battles, after adding it to the game as a Neutral card. They would rather have allowed it to be a Dragon-summoned monster, but since it resides full-time in the Burning Lands and that is where its loyalty lies, Neutral was the best they could hope for.

Enemies - The only enemies that the Sentinel has earned in the modern Splinterlands are the Kobolds, the majority of whose population live underground in the very area that was demolished when the Sentinel made its exit from the caves. Thousands of Kobolds were killed in this exodus, and even though most of the Splinterlands regard Kobolds as expendable mine workers, the Kobolds and their families will not soon forget. In fact, that disturbance has led to greater and more problematic rumblings among the Kobold mining forces of the Burning Lands, who were already feeling disgruntled and underappreciated for the crucial services they provide. Now there are rumors that until the Sentinel is brought to justice for the slaughtering, there could be a Kobold strike looming.

Pastimes - The life of the Onyx Sentinel is simple today. It stands outside the cave of evrytero like a silent guardian. No one knows exactly what is being guarded, but the people of the Burning Lands are becoming more confident each day that the Onyx Sentinel has their best interests in mind (if it has a mind at all). Once upon a time, it was created with a purpose of protection. The Torch has deployed operatives to every reachable corner of the Burning Lands in an attempt to discover its original purpose, but they do not have much hope of finding it. After all, the Sentinel’s Dwarven creator was buried alive with the city of Nurojik some 600 years ago.