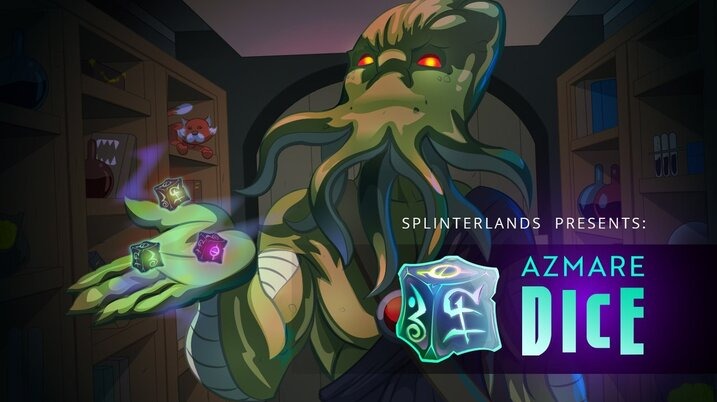 Additionally, Jyitu wanted to remind everyone that he will ONLY accept Dark Energy Crystals (DEC) as payment for his ΛZMΛRÉ Dice!

The Wizards' Council has decoded the dark energy signatures for the ΛZMΛRÉ (Water Splinter) essences contained within the dice - as well as one from the Dragon Splinter - as a result of their continued research... Vera Salacia is a new 3-mana Water Splinter Summoner who grants the Snare ability to all friendly monsters. She will be a fearsome opponent against Dragon-heavy teams and especially during an Earthquake!

Vera Salacia lives alone in the Salt Wastes of ΛZMΛRÉ, not far from the borders of Anenon. While most ΛZMΛRÉans regard the invading salt with loathing, Vera draws her summoning powers from it. She even has special enchanted salts infused into the summoning garments she wears to the Mount Mox tournaments. When asked about her summoning secrets, Vera merely says that she found a special cave in the Frozen Hell. No one even knows how she can withstand such extreme low temperatures.

When Vera summons a team to battle, she also summons a living ocean that spans the entire battleground beneath the feet of her monsters. The living salt water, taking the form of pillars and jutting spires, fights only for Vera Selacia and especially despises fliers. It leaps to incredible heights and pulls the enemy’s flying monsters out of the sky. The Dragons are fascinated by Vera’s methods; they are already attempting to recreate them for Gloridax ends.

The Frost Lion is a strong tank for low mana-cap battles. In addition to Shield which reduces his damage from Melee and Ranged attacks, his icy armor also blocks Magic attacks with the Void Armor ability.

The vast plain of frost that sits in the shadow of Mount Maka is a cold and brutal place. It is there that the massive arena of Ninhelm sits, reserved for battles with the largest monsters in the Splinterlands. Besides those who live beneath the surface, the only creatures that survive in this land have frost and ice in their blood. Through the generations of evolution, they have developed sustainable sub-zero body temperatures and immunities to frostbite. The extreme cold has also slowed the metabolism of these frost animals, so the larger beasts have been able to thrive when less food is available. Among the animals who live on the ice shelf, the great Frost Lions are king.

The essence of the king under the ocean, Poseidon, has been revealed to be contained within the ΛZMΛRÉ Dice! He has a powerful ranged attack thanks to his trident, and his attacks cause a Blast which damages nearby enemies! He also takes reduced damage from Melee and Ranged attacks with the Shield ability.

Last, but not least, he has a new ability called "Immunity", which makes him immune to all negative status effects! This means that he cannot be Afflicted, Blinded, Demoralized, Halved, Headwinded(?), Poisoned, Rusted, Silenced, Slowed, Snared, Stunned, or Weakened! Please note that he is still affected by Summoner stat debuffs, so, for example, against Mimosa he will get -1 Ranged attack but he will not get the Affliction effect due to the Immunity ability.

Somewhere in time, waking from the most peaceful sleep and perhaps the deepest dream that ever was, Poseidon opened his eyes and saw light. Once upon a time, he was the one king and master of the seas themselves. He could command the waves or the direction of a river’s flow. Stretching his ancient arms he reached for his trident, and holding it once more he felt strong and safe.

The oceans that surround the Splinterlands are vast, wider than is known by even the oldest sailors. In their greatest depths are secrets whose remembrance vanished thousands of years ago, preserved in time and waiting to be revealed (or awakened). Poseidon is one of those secrets. Soon the Merfolk will know the one for whom their capital city of Poseidar is named. The Naga Brute cannot attack, but it can take a lot of damage and punish its aggressors. It returns damage to both Melee and Ranged attackers with the Thorns and Return Fire abilities, and its armor can block Magic attacks thanks to the new Void Armor ability.

The hybrid species known as Naga has evolved in many different directions in the last thousand years. The water Naga of ΛZMΛRÉ can breathe both water and air, but they are the smallest Naga in the Splinterlands. The Naga of the Burning Lands are a brutal and superstitious people who have bred with the native Serpentines for hundreds of years, many of whom are gifted with magical powers. The Dragon Splinter of Draykh-Nahka is still the Naga stronghold of the Splinterlands. The largest and most powerful Naga are always born there. Some say it is because of the climate and others say it is the result of gradual breeding with Dragons. Since the seizure of power by Empress Suam Khepri (who is a Naga herself), Naga have been multiplying at an even greater rate in the Dragon Splinter. Many of them are threatening and pushy, as if they have had some secret glimpse of a future that is Naga-controlled.

Although they are strong, fearsome and intimidating, Naga Brutes live by a strange code of politeness that has kept a delicate (and lucky) peace between them and the Dragonfolk with whom they live side by side in Centrum. They never attack unless attacked first. But if you attack one, be prepared for the consequences.