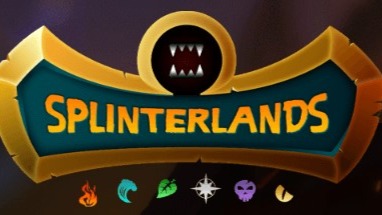 in search for a new game and earn while you're playing? try out Splinterlands!

when I was younger I spend a LOT of hours gaming, VGA Planets, the various tycoons and later on mainly Call of Duty, last year in september I discovered the play to earn thing, wait.. really? earning real money for playing games? that's what most gamers have always dreamed about!

I started with playing League of Kingdoms, and joined a guild that shared the profits from the lands they owned with the players developing the lands, it was paid out in XDai, and after a year I had about $80. not bad for only playing a game was my thinking, but like with most games, things get so boring, I've reached max level and the continent I was playing on was pretty peaceful.

Then my guildmate learned me how to sell the resources I farmed in game at Opensea, and later on at PlayDapp, so I changed from a battle focus to economy focus with upgrading buildings and tech and just concentrated on selling my resources, and wow! at this time, I've earned about $600 with this! But... it's still boring so I needed a new game to have fun with, then I found about Splinterlands.

Splinterlands is a turn based card game, and to me that really sounds dull, but it really got me hooked lol. You can try it out for free, and if you like it and want to start earning, you have to buy the $10 spell book.

I have to admit, the play to earn thing was mainly what got me in the game, and I never played this kind of game before. At the time when I started, at the start of August 2021, starting players got rewarded WAY better as they do now unfortunately. In my first week I got a legendary card worth about $36 at that time, just for completing my daily quest.

Every day you get a new quest, it comes down to winning a certain number of matches in a certain splinter, for example: win 5 matches with the Fire splinter. based on your rating and league you're playing in, you get paid in ingame credits and when you get more card power, in the crypto currency DEC. I'm only at Bronze1, and I'm earning an average of about 4 DEC/win, which is about $0.04

Because it was so rewarding to just complete your daily quests, people started to buy hundreds accounts and let bots play them to just get the cards and sell them, so it wasn't sustainable anymore. The Developers had to fight this so now starting players have less chance to get a card, but still, if you're willing to invest some $ in it, this game can become profitable as long as you put the fun of playing the game in the first position.

From Bronze 2 and up (and a rating of 400+) you start to earn dec, for reaching Bronze 2, you need 1000 card power what equates to about $50 in cards you have to buy to really start earning, so together with the spellbook it's $60.

Playing is one thing, but there's a whole economy in the game, price of cards going up and down, and because of the need to level cards up once you get stronger you have to combine cards to get a higher level one. For example: to get a level 3 common card, you have to combine 14 level 1 cards. Because of this, cards get more scarce over time, and even with the same demand prices will appreciate. So you can invest in cards that are really inexpensive now, but maybe will be worth (much) more in the future.

if you want to try out Splinterlands, please use my Referral Link and I'll happily send you the $0.50 referral bonus, or cards :) and I'll help you with tips & advice.

Crypto fan and BTC HODLer from The Netherlands

Splinterlands: What cards are important?

What cards are important when you start playing Splinterlands, and some tactics to use.