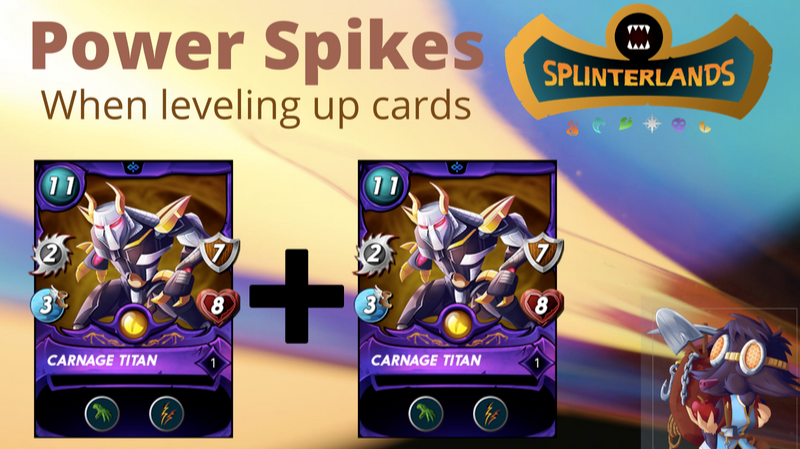 in this post I'd like to illustrate the concept of "power spikes". Cards are obviously getting stronger, the higher you level them up. But not all of us have the funds to max out every card. Therefore it's good to know, which cards you should get to which level. Since there's too many cards to go over each and everyone, my goal is to show you a concept I call "power spikes", that you can use to figure out what makes the most sense for you.

This part is for the brand new players, if you already know all of this, feel free to skip to the Power Spike section.

Splinterlands has two type of cards, Summoners and Monsters. Summoners, which you need to chose one at the beginning of a match. Their abilities always effect either your or your opponents entire team. And monsters, which you can chose up to six of, that then fight for you.

If you navigate to the cards tab in Splinterlands and click on any specific card, you can check out it's stats at each level and the number of cards required to level it up. In this example you can see that the Pelacor Deceiver gets one more Speed at level 2 and we would need to combine 5 level 1 cards, in order to get one at level 2. Congratulations you now have a level 2 Pelacor Deceiver!
(Be sure to only combine exactly as many cards as needed for the next level. You can read why in my 5 tips for newer Splinterlands players, part I.

In order to play your leveled up monsters however, you also need a leveled up summoner.

As I mentioned before power spikes are individual levels at which cards gain a significant boost. Most of the time this is due to a new ability they get, but there's other things to look for. Here are the most important ones to check in order:

Always remember to check the level cap for the league you're playing in. If a common card get's a super strong new ability at level 6, but you only have silver level summoners and are therefore not able to play the level 6 common, it makes no sense to level it up all the way.
(For gameplay and deck building purposes. Investment wise this might be different.)

I'll go more in-depth on the criterias above in the following.

Eeach time a card gets a new ability it usually gets a lot stronger. However not all abilities are equally as strong and some abilities might not fit with a certain splinter, or in a certain strategy.

Let's say you're playing in silver and already have the summoners leveled up. You're now looking to level up cards.

River Nymph gets the Amplify ability at level 4, which increases the damage that is being reflected to the enemy by Thorns, Magic Reflect and Return Fire by 1. This is certainly a strong ability (think of a Mylor team where everyone has Thorns). However the water splinter has very few monsters with these abilities. If you look at the new Chaos Legion cards in fact, not a single one. Therefore the River Nymph at level 4 doesn't synergize very well with the water teams and your money might be spent better else where.

Same scenario, but this time you've got gold level summoners and are looking for monsters to level up.

Time Mage gets the Rust ability at level 5, which reduces the enemy's Amor by 2. If you look at the life splinter, the most common teams are General Sloan with ranged attackers or Lorna Shine with sneak attackers. Both these teams primarily deal damage that hits Armor first. Reducing the enemy's Armor is therefore an awesome ability and Time Mage at level 5 synergizes very well with the life teams. This would be a so called power spike through a new ability.

There's not much finesse to this one, to be honest. Any time a monster gets more Attack it gets a lot stronger. Some do get these spikes earlier than others, though.

Uraeus for example already gets his second Attack at level 2. While he does pick up more Speed, Health and Poison, his Attack stays the same from level 2 (bronze) throughout level 5 (gold). Making level 2 a very early power spike.

Similar to Attack, the more Speed the better. There is the exception of the Reverse Speed ruleset, but you probably wouldn't want your cards at lower levels, just so they perform better in one particular ruleset.
Generally speaking, Speed is most important on your high damage dealing cards, since you want these to attack first, but there's another importance to Speed and that is evasiveness. Chaos Agent already has it's main power spike at level 6, when it gets the Phase ability, allowing it to dodge magic attacks and has no Attack at all. So why is Speed important for this card? Chaos Agent is a great low mana tank, Sneak, Snipe and Opportunity protector, because of his evasiveness. Dodge and Phase allow him to dodge all kind of attacks, making it fairly difficult to kill him for only costing 1 mana. In order to dodge anything though, you need to have enough Speed. In this case gaining more Speed equals to surviving longer and can therefore be seen as a mini power spike.

Health is primarily important for tanks and off tanks, who are likely to take lots of damage. Same rule applies, the more the better. However, +1 Health is not as strong as +1 Speed or +1 Attack. The reason being that one more Health will equal out one more Attack from an enemy only once, than it's gone. Whereas the additional Attack is not depleting. More Health is therefore usually not a power spike in it self, with one exception - Heal!
The Heal, Tank Heal or Triage abilities all heal a third of the monster's maximum Health per round. Numbers are being rounded down.

The addition of one Health isn't too noteworthy in terms of damage it can take, but the one extra heal it gets from it each round is. Making level 5 a power spike.

There's also the point to be made about Earthquake and Noxious Fumes rulesets, where your monster will take 2 damage each turn. Having 3 Health instead of 2 for example would make your monster survive another round, but since this is ruleset specific again, I'd not count it as a true power spike.

Lastly we have Armor, which in my opinion is the weakest stat of them all and doesn't give any power spikes by increasing it. The Repair ability always repairs 2 Armor, regardless of the maximum amount.
The only way Armor being a true power spike is when you go from 0 to at least 1, because then it's one melee or ranged attack blocked, which is very strong indeed. However, I couldn't think of a single card, that starts without any Armor and gets some as you level it up.

To wrap it up

Hopefully I could illustrate the concept of "power spikes" to you and that you don't always need to level a card to the maximum of your league.

Look for these power spikes, when building your decks and keep in mind to always check if they truely benefit your deck, your strategy and your play style.

Content creator and YouTuber Luke Plays2Earn also has a Deck Building Series on different budgets, where you can get an idea of which cards to get to which levels, depending on your budget. (Life and Earth decks are missing, though.) I'm giving away the level 2 Pelacor Deceiver. For a chance to win it, just vote on and reblog this post and leave me your in-game name in the comments.