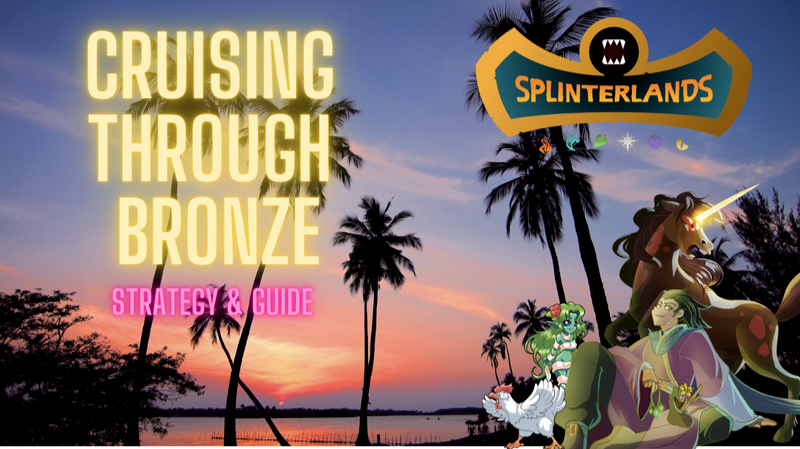 Since a lot of people are still struggling in Bronze league and the general sentiment of the league not being fun due to bots and low win rates, I decided to make this post showing you how to get easy wins and have fun.

On April 28th, approximately 26h before the end of the season I had to play my account from 500 rating up to at least 1000 in order to get the Silver 3 end of season rewards.
Since I rented out all my cards I decided to rent some my own and get to climbing.

Here's what I rented and used:

The screen grab is a little small but I hope you can see the green on the left, implicating how many battles I won. To give an exact number: Out of the last 20 I won 17 and lost 3 with a 12 game win streak, only using the earth team and Mylor.

The strategy is super simple and uses the same cards most of the time, with a few tweaks here and there.

The idea behind this line up is that Unicorn Mustang is a great tank and damage dealer at the same time. Void helps against magic and the high HP combined with Thorns from Mylor and Heal from Wood Nymph make him almost impossible to deal with for melee monsters and even ranged attackers, because at low mana games you just don't have enough damage to go through 10HP that are being healed.

The Chicken is so important, because you can play it each and every time and it will protect your Wood Nymph from Sneak, Snipe and Opportunity and with Thorns often kill enemy melee attackers, all for 0 Mana.

This brings us to a very important part of the strategy: Protecting the Wood Nymph. The simplest way to protect a card is usually to put it in the middle, but this makes it still vulnerable to Snipe and especially the death team has a pretty nasty Snipe card.

I'm talking about this guy: Combined with Thaddius who will decrease all of your monsters Health by 1 and leave Wood Nymph with only one Health total, the Death Elemental will always take it out with one attack and because it's faster this will happen before Wood Nymph get's to do anything. There's also other snipe cards, which can do the same.

The easiest solution to this is to put a card with no attack in front of Wood Nymph to absorb the Snipe attack and as it so comes the earth team has this guy: Who will not only absorb the Snipe hit but throw it right back in the case of Death Elemental, killing it off in two turns.
Other solutions could be the Chaos Agent or basically any other card that has ranged, magic or no attack.

Here are some battles to showcase the strategy in action:
Example 1, Example 2, Example 3

As you can see it's always the exact same team and it works against different line ups.

Usually Armor is really good against Thorns and they also brought two sneak attackers to get rid of my Wood Nymph quickly. Furthermore there are no Snipes so Failed Summoner isn't doing anything? Wrong. He's soaking up more Sneak attacks and killing them off with Thorns and all the while Unicorn Mustang is being left alone dishing out 3 damage each turn.

There are two more cards that you can use if you have more mana available.
Regal Peryton and Goblin Psychic. Regal Peryton usually goes in the back (in front of Chicken) if you expect your enemy to play Sneak attacks, because it has good dodging abilities and enough health to survive a couple of hits and throw Thorns damage back.
Or it can go in the second position behind Unicorn Mustang to protect against Snipe attacks and take the Tank position, in case Mustang dies (which happens almost never).

I only had 3 99 mana battles and I used this line up for those:
Click here
Unfortunately I only have the one I lost, but the other two I used the exact same line up and won (promised, lol).

I skipped most of the battles, but keep in mind this was done entering the last day of the season, where it usually gets most competitive as everyone is trying to rank up. For half a cent I think anyone should be able to afford renting these cards and hopefully this post helped you in understanding the strategy and what to look out for.

The next time you're stuck in Bronze, give this a go and let me know how you did. If you'd like more strategy breakdowns like these also let me know, I do have one for the water team and potentially for the life team as well.

While you're at it you can also use this strategy in Novice/Bronze tournaments. Luke Plays to Earn has recently made a video on how to, which is very similar to this guide.