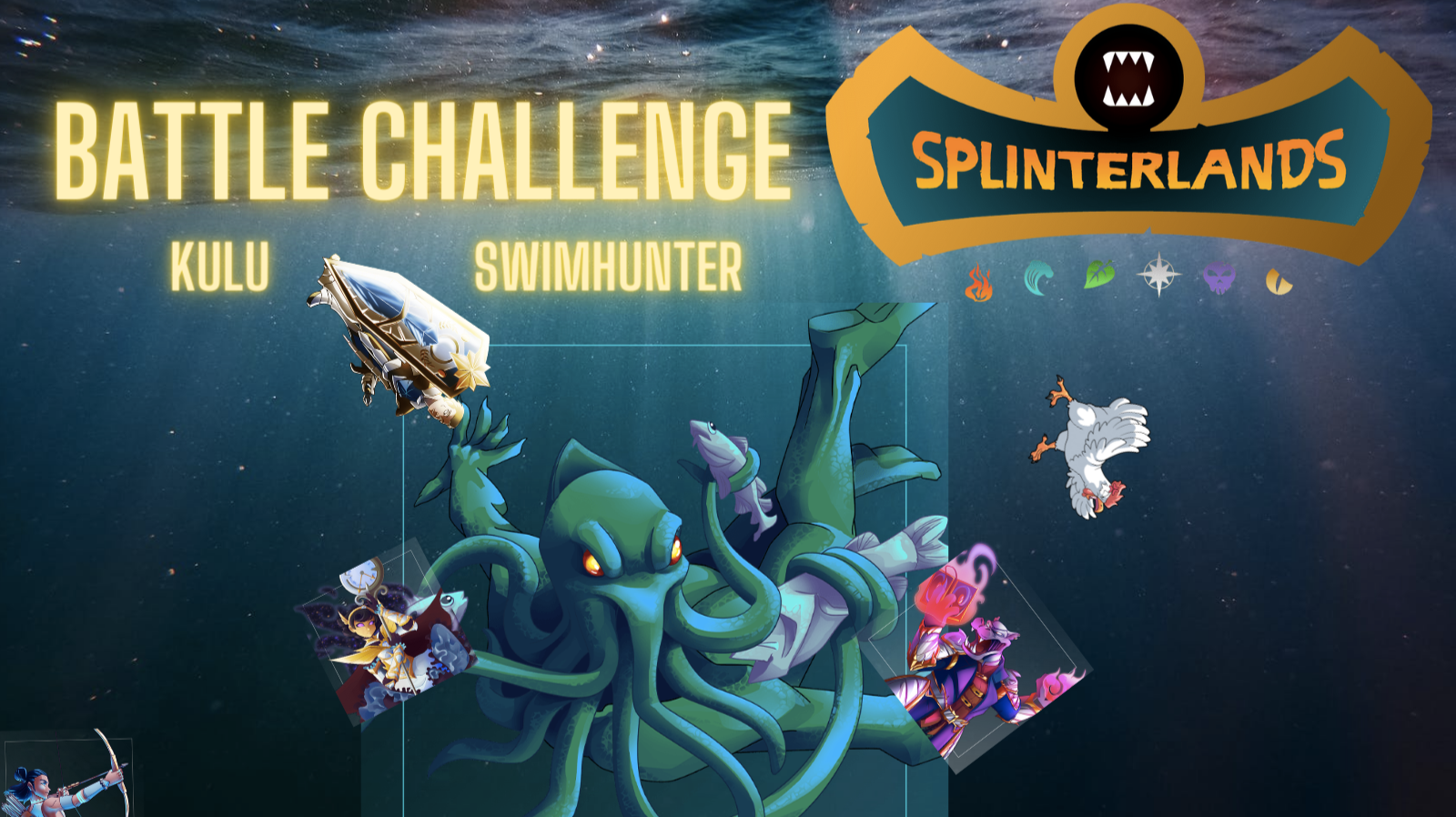 Hello and welcome to my Battle Challenge with the Kulu Swimhunter! The battle took place in the bronze league, because I'm renting out my cards at the moment. But I decided to hop into a battle for the Challenge! In the following I will give you my thoughts on the card and my line up and the strategy behind it for the battle. Kulu Swimhunters are members of a race of squid-like creatures that hunt in packs. They use their multiple tentacles to wield all manner of projectiles, to include spears, coral, and even fish. They are very aggressive and are known to traverse oceans, lakes, and rivers, killing for sport and leaving a trail of destruction in their wake. They do not value gold or glory and will ally themselves with whoever promises the greatest opportunity to hunt and kill.
(From the Splinterlands Lore)

Kulu Swimhunter is a common water monster, with ranged attack and no abilities. It came as part of the Chaos Legion Edition and is a free for all playable starter card.
Right from level 1 it has 2 Attack and decent Health. As you level it up all of it's stats increase greatly. At max level you get a ranged beast with 4 Attack, 5 Speed and 6 Health for only 4 Mana! Back To Basics
Monsters lose all abilities I think it's a very strong card, because of it's good stats and low mana cost. You can utilize it in a lot of situation. It goes very well with Igor Darkspear and Diemonshark. Kulu and Igor damage the enemy's tank, making it easier for Diemonshark to get a kill and trigger his Trample ability.

The ruleset was standard, with 25 mana and all splinters playable. So no restrictions.

I chose two rather expensive monsters with Diemonshark and FLying Squid in the first and second position to make sure I had enough Health in front of Kulu Swimhunter, so the enemy wouldn't get to him. With it's 4 Health and 1 Armor from Kelya I wasn't worried too much about sneak attacks. I also only used monsters that attack the enemy's first position to focus my damage on one monster and give Diemonshark a chance to trigger it's Trample ability.

Round one is a lot of back and forth between me and my opponent's damage dealers. Like me they chose to go for a focus fire strategy on my tank as well. With the buff from General Sloan my opponent is dealing more damage than me though and my Diemonshark is nearly dead by the end of the first round.

Round two commences with relentless attacks against the tanks. Sadly my Trample strategy didn't come true, because Diemonshark died in this round. In return we took out their Shieldbearer and got a nice dodge with the Flying Squid against Xenith Archer.

We got really lucky this round, not going to lie. We take out the Gargoya Scrapper and Chicken, but the clutch play was Flying Squid dodging both of Pelacor Arbalest's attacks for a total of 6 damage (missed). If these attacks would've hit it would've died and we would've lost the game right then and there. This way we go into round 4.

We tank the Time Mage's hit and return fire, blowing it away and pulling Pelacor Arbalest into the first position where it can't attack. Now we're good. With only Xenith Archer being able to attack, we have no problems taking care of Pelacor Arbalest first and finishing off the Archer in round 5. The plan to trigger Diemonsharks Trample didn't workout, because it died too early, but the strategy with two tanky monsters in front of Kulu did work. We did get lucky with the double dodge in round 3, but still. Kulu was able to fire each and every round, not missing a single shot and securing us the win. I like this card a lot, because of it's good stats and low mana cost.

Also check out my 5 tips for newer players - Part I, Part II