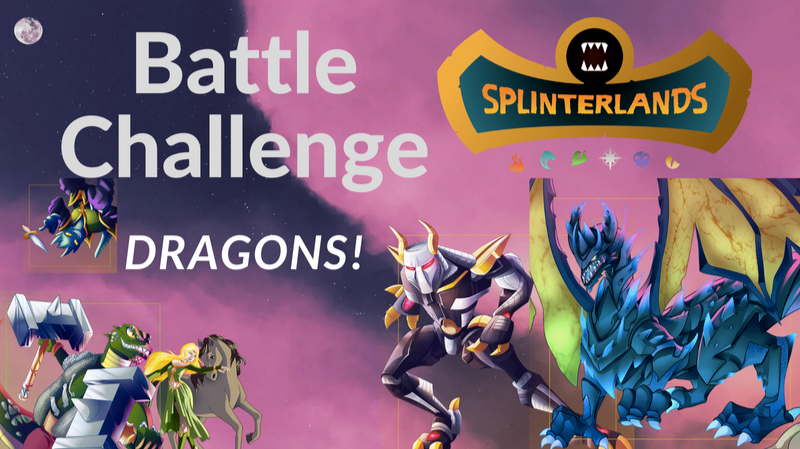 Hello and welcome to another weekly Battle Challenge!

This weeks theme are Dragons and as I just rented a couple of cards for a tournament I'm ready to display their full force on my climb to the leaderboard in Silver!

I'll go over the battle, my strategy and thoughts on different Dragon cards in more depth below, but if you want to skip right to the action: Here's the full battle. For this battle I used Quix the Devious, Carnage Titan and Chaos Dragon. All dragon cards from the Chaos Legion edition. Because I don't own a Carnage Titan and played him for the first time, I decided to highlight him.

The lore is very long on this card, so I won't quote it here as usually. But I definitely recommend you reading it. Carnage Titan Lore!

The Carnage it is a very powerful melee attacking card with the following abilities:

Double Strike is arguably one of the best abilities in the game, allowing a monster to attack twice. Paired with Reach, this allows for some insane combinations (as I will show you in this battle). Shield coupled with it's high Armor and Health also make this card a very good tank.

Frankly I absolutely fell in love with him and need to save up some money to get at least a level 2 copy for silver.

The rules for this battle were True Strike and Noxious Fumes with a mana cap of 60 and every splinter playable, except for fire.

First things first: Doesn't this line up look beautiful to you? All these high mana legendaries look so majestic...jokes aside, let's get to the game plan and my thoughts behind the line up.

With Noxious Fumes I try to opt for either Immunity, which I only have on the Forgotten One and fire wasn't allowed, or for high Health and Healing. This battle I went for the latter, with Grund and Carnage Titan in first and second position as my two main damage dealers. I always wanted to try this "wombo-combo" of Double Strikes and the True Strike ruleset (attack's can't miss) helped with that, because melee tends to be weak to high speed and dodging. Next up we have the Chaos Dragon, because we had so much mana to play around with and it has good health and damage. In the back we have Kron and Cornaelus both with high health, good damage and most importantly Heal to withstand the Poison. I had exactly 1 mana left which I spent on Epona, giving my team even more health with the Strengthen.

And that's it. Tons of damage, lots of health and heals to out sustain my opponent. Let's see how it went! My opponent went for a Lorna Shine Sneak team, with Uriel in front and Shieldbearer in the back. I think their strategy was to have two strong tanks to absorb the damage while dealing a lot of damage to my backline with the sneak attackers.

Round 1 starts with my Chaos Dragon getting off a nice shot on their Sand Worm, hitting the adjacent Silvershield Knight and Stitch Leech with Blast and taking away three Divine Shields with one attack. Grund and Carnage Titan with their combines 4 attacks only manage to strip Uriel of his Divine Shield and Armor. In return the Sneak attack barrage rains down on my Cornealus taking him out in one swoop.

Not sure what to think of this so far... The Poison hit every monster for 2 damage and makes things look a little bit better.

We start off with Chaos Dragon hitting a perfect shot on Stitch Leech, taking it out, leaving Sand Worm severely wounded and taking away Silvershield Assassin's Divine Shield. This is followed by Grund and Carnage Titan demolishing the Uriel, before it has a chance to strike with it's Recharge attack for 12 damage!

Silvershield Assassin and Sand Worm do take out my Kron, but it get's off an attack first against the Shieldbearer, also leaving it very vulnerable. This is what the end of round 2 looks like (start of round 3 before the Poison hits). And this is what the start of round 3 looks like. My Epona died to the Poison damage, but so did their Sand Worm and Shieldbearer.

Chaos Dragon attack's one final time, taking out both of the remaining monsters with one hit. I was very happy with the team I submitted, but when I saw their's (all the gold foil cards and alphas) I got a little nervous. Round 1 didn't help with that at all, as my Cornealus just died without me taking out anything in return.

The Poison changed this though, as it cut right through the Divine Shield (maybe my opponent didn't know it would go through?), leaving his backline fairly vulnerable, while my high health monsters weren't too effected. Chaos Dragon then also landed a perfect shot on Stitch Leech and this is why it's one of my favorite Cards in high mana battles. The Scattershot + Blast magic damage is just too much fun. Lastly my "wombo-combo" double Double Strike attackers did a fantastic job of ripping through Uriel, securing the win.

There's no getting around it: I love dragons! The ability to combine them with any other splinter, the whole looks and artwork and their powerful abilities and stats make them so much fun. Yes they are more expensive (both in mana cost and market price), but when you have the mana to play them, they absolutely deliver.