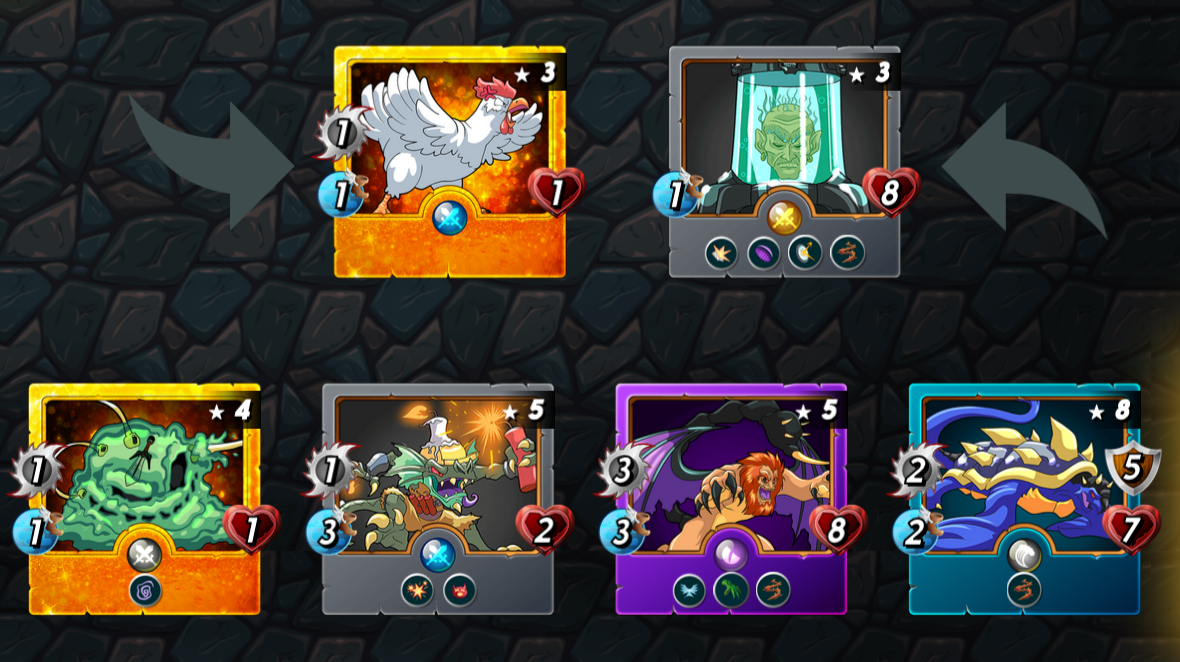 Life has been busy busy busy as my small family readies for a 1900 move but nothing gets in the way of games and spreading the good news of Play2Earn! I thought this would be a good time to revisit some of my favorite Splinterland battles over the past month. All of these battles revealed something unexpected or otherwise worth mentioning in my estimation.

Gosh, what an unfriendly battlefield! Earthquake AND Melee Mayhem makes for just about the least survivable rule set possible, My battle-line is honestly just a stack of my very favorite creatures who happen to fit this situation perfectly. Lord Arianthus, for example is one of my favorite card in all of Splinterlands and I’ve seen it consistently undervalued by new players.

I call this strategy “He Who Walks behind the Rose” and it’s name is a childhood misunderstanding of one of my name of a villain from one of my very favorite horror movies. The first player to comment the name that film and their Splinterlands username will get sent a few card! Have at it yall!

I love watching Lord A tear down those who come at him. Two monster kills by a creature with no attack in turn one is impressive! But then my single favorite Monster in all of Splinterlands shows up and tops that with 3 kills in one turn, Hubba Hubba.

is there any more legendary Summoner in Splinterlands than the iconic than Yodin Zaku? When I see my opponent lay down a Yodin my expectation of winning the battle plummets. And against a member of the guild one level above mine in our Network? Oof. That said, I was not worried here because I just don’t lose Equalizer games. Why? Watch and learn.

Both my opponent and I have fierce lineups with Legendary Monsters acting as generals. With everyone having such high HP here this turns into a kaiju fight quickly but I have a secret weapons, and it’s a common creature. With all the flashy attacks and cool monsters it’s east to miss our humble vampire becoming an absolute beast.

If there is one interaction in this game that feels a little too good it’s Life Leach monsters in the Equalizer rule set. This strategy pushes out Vampire forward until he is nearly twice as big as The Karken. What a time to be alive.

Lesson: Equalizer makes Life Leach near broken. Make sure to use it early and often!

If you’re going to get stomped it’s nice to get stomped by family I guess? And getting stomped here is just what I expected when I saw that Goldfoil Vigilator. On top of that the player in question has ended more than a few of my Win Streaks. Somehow that’s not what happened here at all.

Lesson: Melee Mayhem can bring life to some really interesting cards. Watch the work Gremlin Blaster does for us here!

Thanks again, as always, for choosing to spend some of your time here talking about Splinterlands with me! Creating these articles is a high point in my week every week and each and every one of you is a friend. I hope this “Battle Analysis” article type is of use.

It might be a bit before I’m posting again but when I do I will be on the east coast, closer to family, in a beautiful home with my family, and FINAILLY have a devoted office space of my own. Yall Im so excited!

Chase those dreams yall! Until next time!

As a nerd to my core I've spent thousands of hours just sitting around tables covered in cards and dice, surrounded by friends, having some of the best times in my life. Somewhere along the way trading card games seems to have lost their way in the pursuit of selling ever more packs. And we kept playing for our love of the games. Splinterlands claims to want to change that through the use of blockchain technology to give back players control of their cards and choices. But, is it fun? What else matters?