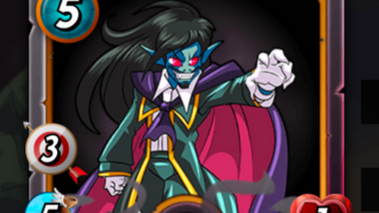 Splinterlands on a Shoestring! Death Basics!

Authors Note: This article is being re-posted with my permission from PeakD and due to this the prices will be slightly out of date. I stand by the recommendations in this article 100% and while some prices have shifted there have been no major changes. For transparencies sake I wanted to mention this :)

For as long as I can remember I’ve liked it spooky. I’ve been collecting horror VHS for 21 years now and on a recent trip home to introduce my wife to my parents we were able to find a book I had drawn all about Monsters at the fresh-faced age of 7. So when I came to Splinterlands I knew DEATH was going to be one of my favorite Splinters just based on the card art and my predisposition to thinking skeletons are awesome.

Thankfully over the past month I’ve quickly learned that DEATH is an extremely powerful and nuanced Splinter that I have a lot of fun playing. I imagine there are a lot of other DEATH lovers out there who are looking to get a foot into the grave. Rexx is a very simple card. He is a giant dinosaur, his attack stat is massive, and he costs about a penny per BCX. There is a very good reason that the icon for Stamped is a Rexx about to eat your face.

Whether EARTH or DEATH Rexx is a staple. There is nothing else to say here. THOU SHALL NOT FALL

Vampire is another great DEATH staple that’s just dripping in flavor. Not only does he play just like you’d imagine a Vampire might it really really works. For the price Vampire is an absolute beast in games using the Equalized Rule Set to boost their HP often to the double digits o turn zero. If you are running a level 6+ and have the extra evasion provided by Flying this becomes all the more difficult to take down.

At less than a nickel per BCX Vampire is another bargain. I swear I’m not trying to phone it in it’s just that DEATH is as simple as it is cheap. This Undead Badger must be a honey badger because she’s a real sweetie! At level 5+ for a meager 2 mana you are getting 2 attack with Sneak. And again, at the time of this article Undead Badger is sitting at <$.02BCX.

Sometimes 6 mana for a backline Monster like this can seam back breaking. With cards like Northern Archer let alone Halfling Alchemist it can become hard to justify 6 mana for a Monster who could easily be replaced by two or even three other heavy hitters. Affliction leaves a bit to be desired and Oppress doesn’t SOUND all that strong but, again, 4 damage. If that gets doubled by Oppress against a Warrior of Peace or a Gelatinous Cube all of a sudden you are hitting for 8. This is bonkers.

Reaper just gets it done for $.05BCX. VALUE BEYOND ANY SHADOW OF A DOUBT

One of the only things that nearly all DEATH creatures have in common is that they are on the fragile end, often with this balancing very strong offensive potential. For a single mana Shadowy Presence is able to Strengthen all the other Monsters on your team, all for a quarter per BCX.

Any Monster benefits from this but DEATH has a few that this single card can push very close to feeling oppressive. Vampire pairs especially well with The Shadow.

Ok so I want to be clear that Haunted Spirit is pushing thing “on a Shoestring” part of this article a bit at somewhere around $.50-1BCX. Not only that but I’m going to recommend you get him to level 4 (x11) or level 6 (x35) (though a single $.99 x1 will still be impactful if you are a level 1 player.

Haunted Spirit is an extremely dynamic frontline tank without being all that impressive stat-wise. Don’t get me wrong 4 melee and 9 health is strong, especially for a 5 mana cost Monster but with Heal and Magic reflect this is all pushed over the top. People often underestimate Magic Reflect, maybe if it was called Magic Block Then Reflect people would realize it’s one of the best abilities in the game.

When you are blocking one of the 3 damage types flat out and healing each round you’re just a Shadowy Presence and a beneficial Rule Set or two away from The Spirit running away with the on his own. As he can be backed up with DEATHs top of the line ranged killers and still have a Mana Cost in the teens it’s hard not to consider Haunted Spirit about as perfect as a Monster in this game can be.

I could easily just recommend Animated Corpse as a cheapo tank with comparable stats for under a <.06BCX but I don’t know if this is a corner I can recommend cutting even with Spirit costing neatly 15x the price per BCX. So I mentioned both here.

I hope this has been helpful for some of you! While I knew knew DEATH was going to come out as one of the cheaper Splinters I don’t think I knew it was going to be quite this low! I wonder if any other the others will be able to beat it!

As a nerd to my core I've spent thousands of hours just sitting around tables covered in cards and dice, surrounded by friends, having some of the best times in my life. Somewhere along the way trading card games seems to have lost their way in the pursuit of selling ever more packs. And we kept playing for our love of the games. Splinterlands claims to want to change that through the use of blockchain technology to give back players control of their cards and choices. But, is it fun? What else matters?