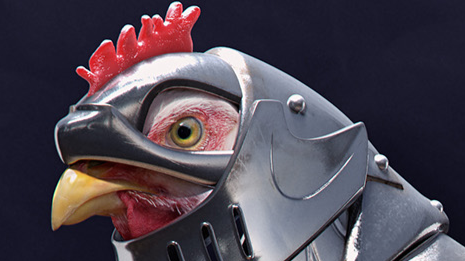 This is the 7th installment in my twice-weekly Splinterlands blog - covering my first foray into the game.  In this edition I will discuss one of the most critical decisions that I have to make in most Splinterlands games - where to put the Chicken!

My Splinterlands skills have slowly been improving over the past few week or so.  I now win well over half my matches (we'll see how long that lasts once I level up to Bronze I).  At this level of play, I find that the most critical decision I make in each match is where to put the Furious Chicken.   In general I have noticed that there are 3 main positions where the chicken usually goes.

1st, there is right up front.  This position allows the chicken to take the first hit of the tank, and effectively gives the lead tank a second layer of chicken armor. 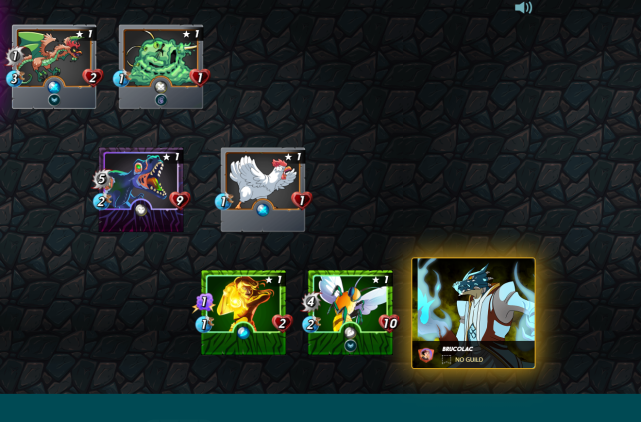 Next, there is directly behind the lead tank - this position allows the chicken to take one additional hit after the lead tank goes down, which either protects the secondary tank/magic user and also gives the ranged units a bit more buffer before they end up in the dread front row. 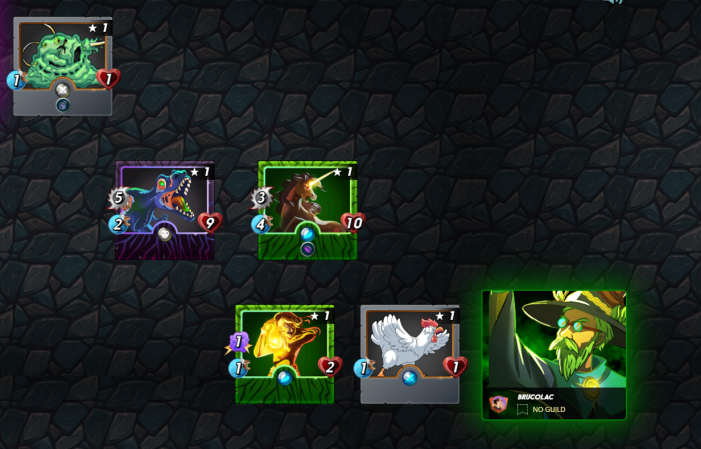 Last tactic is to put the chicken all the way in the back.  This allows the chicken to take a hit from a sneak unit instead of one of the more vulnerable ranged or magic attackers.

So what decides where the chicken goes?  I have boiled it down to 3 main factors - the effective HP ahead of my first ranged unit vs HP of my back unit, the speed of my tank, and the amount of mana in the match.

First I look at the effective HP (armor + health) ahead of my first ranged attacker (pre-chicken).  I usually throw in an additional HP for every unit more than the first to account for inefficiencies the opponent will have when killing the first unit.  I compare this number to the effective HP of my rear unit.  Roughly speaking, if the effective HP of the front units is more than 3x the HP of the rear unit then I will put the chicken in the back (and the decision is finished).  If not, the chicken will go in one of the front two slots.

If the chicken is going into one of the front two slots then the next question is whether it should go first or second.  This is when the speed of the front tank comes into play.  Roughly speaking, a fast tank (4 or greater speed) should have the chicken behind it, so you don't miss your first attack.  A medium or slow tank can have the chicken in front or behind the lead tank.

So if we're dealing with a front-chicken, slow tank scenario, how do you break the tie?  My answer depends on the mana level of the battle.  In high mana games (>20 or so), I tend to put the chicken behind the lead tank, while in low-mana games I tend to put the chicken right up front.  Why?  Because I want the chicken to make the difference between my lead tank or 2nd tank/magic user getting to attack one more time or not.  In high mana games, there is lots of damage initially in play, which makes it less likely that deflecting that first shot will make a difference in the number of times my tanks attacks.  Not so in a low mana game, where there is relatively less firepower pointing at the tank.  By the time the first tank goes down, there will be less pieces on the board, and the chicken can once again have a shot at being the crucial difference between the 2nd tank or magic user getting that critical shot off before death.

What do you all think?  Do you agree with this methodology?  How do you play your chickens?

Thanks for reading! See you again on Sunday.  Don't forget to check out the previous posts in the series, and me know in the comments if there are any questions that you'd like me to dive into. And if you are interested in signing up for Splinterland, please do so using my referral link.

Splinterland - Perspectives of a Noob

Overview of a novice starting the journey into Splinterland, blockchain gaming, and DAPPs.