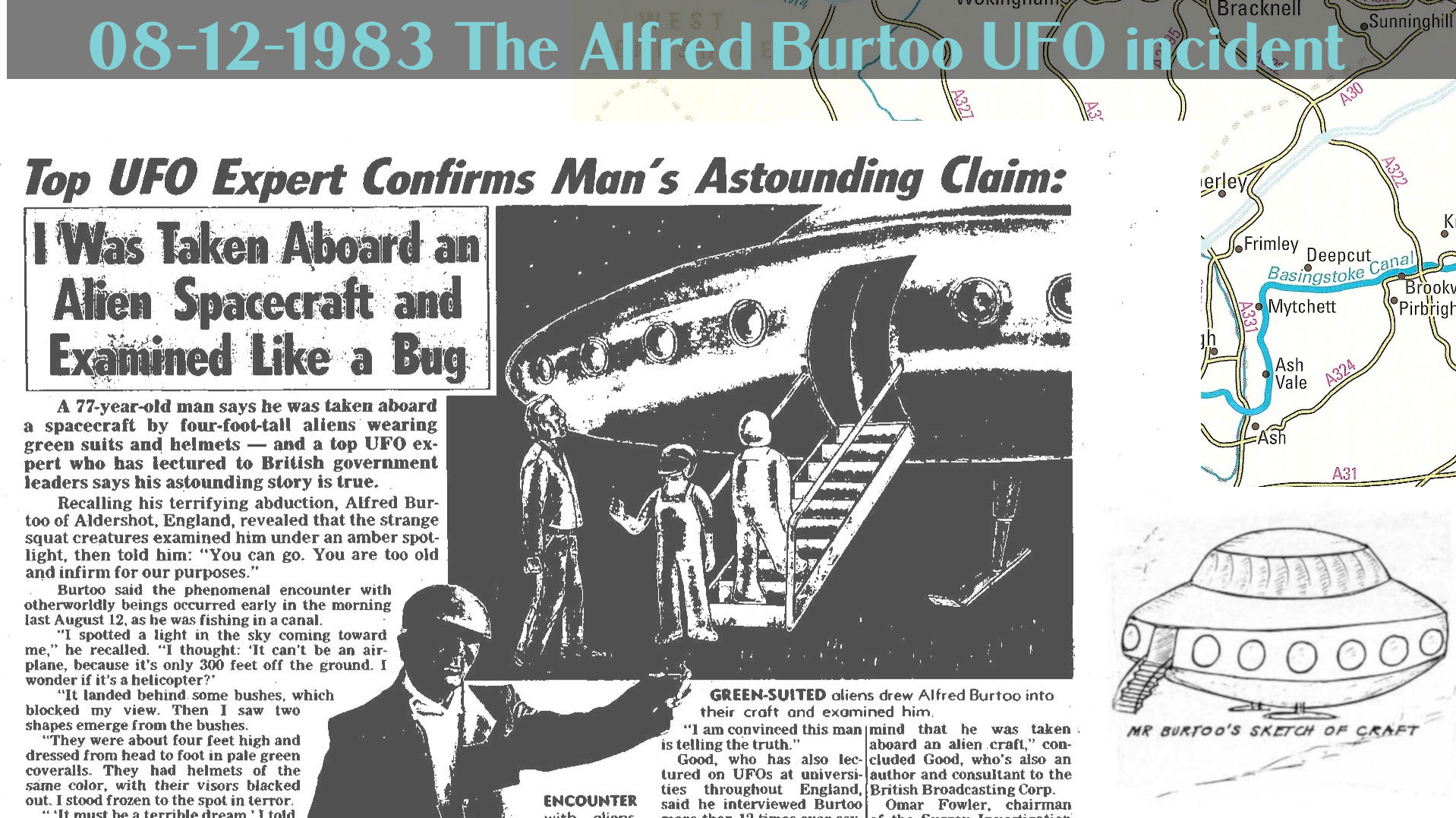 An elderly man had an interesting encounter on a summer night in the United Kingdom in the 1980s. For Alfed it was going to be a night of fishing on the canal. But shortly after he cast off, the events proceeding would be quite the story to tell.

"On the morning of August 12th 1983 Alfred Burtoo traveled to his preferred fishing spot around 1am in Aldershot, Hampshire, United Kingdom. About 45 minutes into his fishing, while sipping his tea. He saw a strange light heading towards him. It settled down behind some trees around a tree hundred foot position in the woods. He could see the light poking through the gaps in the branches.

He got up to see better and as soon as he did Tiny began to growl and refusing to listen to Alfred's commands. It was then he began to make out two forms heading his direction. Alfred was curious what he was seeing, not so much scared of these forms. The creatures stopped about five feet from him staring at Alfred, he thinks they were about four feet tall and wearing pale green coveralls. Each suit appeared to be a perfect fit on their body as if its was molded to them. There was no sign of buttons, zippers or any other fastener of any kind. Each of them also wore a helmet, also pale-green, and with visor that was blacked out.

After several seconds of staring at each other one of the forms motioned with its arm to for Alfed to follow. It then turned back towards the ship and started moving that direction. He followed the first being and the second one followed Alfred.

As they approached the craft, about forty feet wide with a metallic appearance. He ascended up the steps of the small craft and the being in front of him would move out of sight. Alfred claimed to hear a sliding door sound or possible something else. The other being positioned its self at the door he just passed through during climbing the stairway.

The room was alot warmer than outside, although not uncomfortable. He could also sense a smell like "decaying meat". He noticed how the beings moved in a “stiff” manner, although aside from this, their movements were almost the same as people.

For the next ten minutes or so, Alfed stood in silence doing his best to examine with his eyes his surroundings. All of the walls were black and appeared like unfinished metal. The outside of the craft looks like burnished aluminum. No signs of nuts and bolts, a seamless design.

What interested Alfred most of all was a shaft that rose up from the floor to the ceiling; it was about 4' in circumference, and on the right hand side of it was a Z-shaped knob; on the other side of that stood two more beings, similar to those that accompanied him outside.

All of a sudden a voice emanated from somewhere in the room and said to Alfred, "come and stand under the amber light" He stood there for about five minutes, then a voice said, “what is your age”, to which he replied that he would be 78 next birthday.

After a while Alfred was asked to turn around, which he did, facing the wall; about five minutes later the voice said to him, “you can go, you are too old and infirm for our purpose.”

Then going back to the spot where he had left his dog guarding his fishing tackle, the first thing he did when he got there was to pick up his cold cup of tea and drink it.

Suddenly Alfred saw the strange craft lift off and the bright lights around it came on again; in fact, this time it was so bright that he could see his fishing float in the water 6 feet away from the opposite bank of the canal; he could even make out the thin iron bars on the canal bridge.

The craft took off at a very high speed then a little later Alfred saw the same light going over the Hogs Back area and out of sight; it was now around 2.00am."

Returning to the landing site two days later, Alfred noticed straight away the foliage where the UFO has stood was flattened and in disarray, yet unfortunately, no photos or soil samples where taken as he feared being made fun of. And that no one would believe him whatever samples of evidence he brought forward.

In Early December 2006 an investigator "Beamsinvestigations" visited the location of the event and took some pictures. And on one of the images she noticed a very peculiar anomaly.

A weird object has appeared in one frame of a sequence. Nothing untoward was visible in the picture shot directly before this or the one after.

In April 2013 "beamsinvestigations" located a friend of Alfred's, who used to go fishing with him.

He confirmed to us in conversation that; 'Alfred was a really nice man, and certainly not given to making stories up'.

His health continued to fail over the following years, until his death at eight years of age on 31st August 1986.