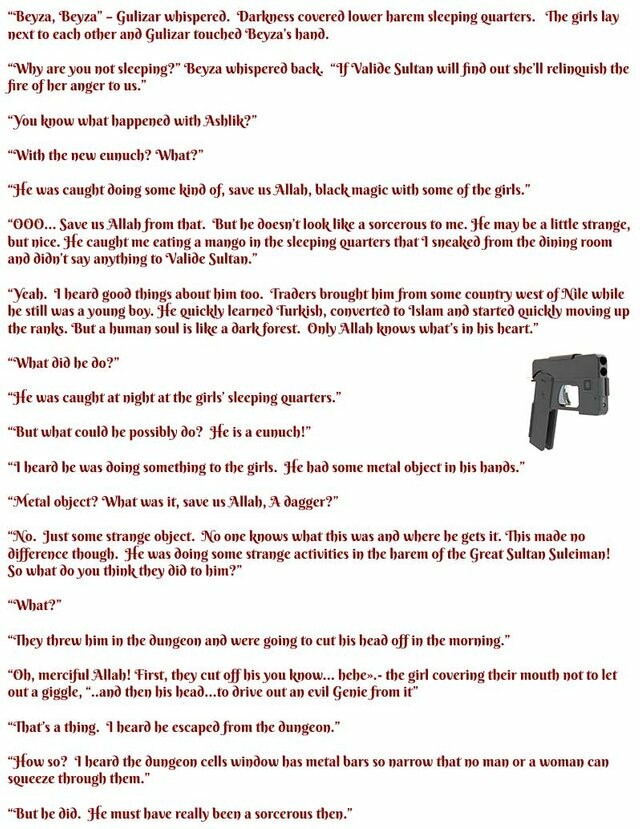 Wilfred lay on something hard. The stiff light hit the eyes even through closed eyelids. His head ached and when he opened his eyes, Wilfred did not get scared. Directly above him, there was a strange face. It was hairless, bluish-gray, with oversized eyes of deep blue color, located in the center of even larger eye sockets. 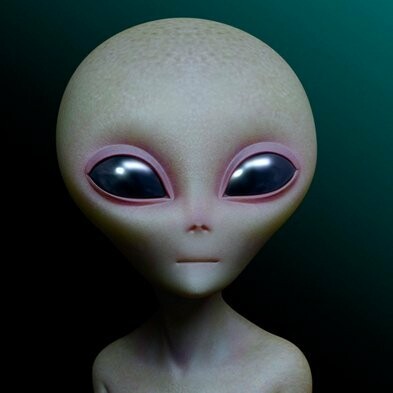 The creature stirred. "He pressed the button," Wilfred figured. The pain gradually began to recede. Wilfred looked at the homunculus with gratitude. "Mercy Monsieur, or maybe it's Madame? Still merci. Now it would be nice to turn my head. I don’t want to look at it all the time."

The homunculus again produced some action and Wilfred was now able to turn his head and look around.

"Laboratory" came through Wilfred’s head. He was lying on some sort of aggregate with tentacles, suckers, and buttons around him. "…a fucking torture chamber ..." Wilfred concluded. "Well, I got caught. Now the homunculus will torture me with an electric current or in some other weird way."

"This is not our goal" - the phrase suddenly appeared in Wilfred's mind and clearly did not come him. Wilfred winced. For some reason, it was now that a sticky fear crept over the spine and settled somewhere closer to the sphincters. Wilfred cast a quick glance at the homunculus, but that face expressed nothing.

"Is this critter reading my thoughts?" Wilfred became even more frightened, realizing that now he not only needs to keep silence about what he thinks but also not think of anything that could offend a homunculus ... that is, a respectable alien.

"Prepare for communication" - the next foreign reply followed. Wilfred tried to trace the origin of the voice. The answer immediately manifested itself in the mind, as if it had been placed there. Wilfred again concentrated on the newcomer. He did not notice a change in his pose or the expression of his huge dark eyes.

"What do you want from me?" Wilfred said out aloud, with some irritation. The alien's face did not move and the expression did not change. However, it seemed to Wilfred that the alien again turned something on, because from this instant Wilfred’s memory seemed to explode. The scenes of the distant and recent past surfaced without any rhyme or reason, the memories of the events that Wilfred forgot about and those that he did not want to remember.

There was a moment when his dad spanked him for the flour poured onto the floor. There was a fight, in which the neighbor's boys pounced on him collectively and beat him for a long time because he was somehow "unlike them." There was the incident with a math teacher in the fifth grade when Wil solved the problem differently than she demanded and for this, she gave him a fail. He remembered the failure with Adele, the girl in whom he fell in love with, and who accused him of pretentiousness when he simply explained her his thoughts.

"I do not understand you, Wil." You're some kind of weirdo…” then, after a pause, she added. “Do not call me.”

Wilfred’s jaws jittered in irritation as he clenched his teeth. He did not like the fact that the homunculus rummaged in his brain but he could do nothing about it. The only resistance he could mount was his efforts to think of nothing and not to remember anything, which he tried to do.

“Resistance is not recommended,” The homunculus apparently understood what Wilfred was doing. “With resistance, the absorption power would have to be increased and this can cause pain.”

Then the process was over. Slightly swaying on his thin legs, the homunculus pressed another button and a large screen opened in the middle of the ceiling.

The screen turned on, displaying the starry sky. The homunculus pointed to the spot among the stars. The point began to grow rapidly, turned first into a distant star, then into the sun, and then moved towards one of the planets of this sun. Something in his face moved the first time. He immobilized Wilfred again and slowly pressed the shaft.

“Hey buddy, wake up!” Fred shook Wilfred by the shoulder. Is this your house?” Wilfred swallowed saliva, shook his head and looked out the car. The car indeed stood in front of William’s house.

“Why are you looking at me in such a weird way, buddy? These two beers must have made some changes in you.” Fred smirked.

From that day on, Wilfred's oddities waned. He tried to maintain conversations, and easily stopped them when necessary, always greeted people so that everyone heard him and even sometimes commented on how nice of a person he was.

His wife was much happier too.

"Darling, lately you are behaving much better," she told him one day, "I am so proud of you. What happened?”

“Probably, I have matured and stopped showing off.” Wilfred smiled. “I guess at some point in life everyone straightens up. Even me.”

Only sometimes, Wilfred felt unbearable loneliness. In moments like these, he went out in the night, and if the sky was clear, looked at the distant star.