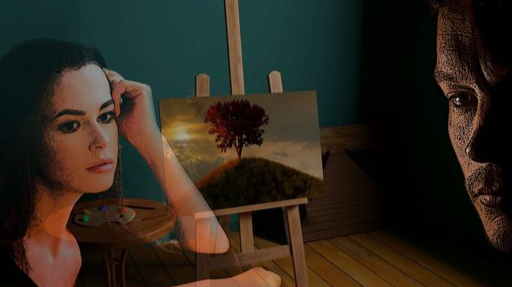 "Do you like shrimps, Mr. Ross", she smiled. Her smile showed a large part of her upper gum.

Robert smirked and dipped a shrimp into a hot sauce.
"How come this redhead gets around so much?' he remembered that several times before she turned out in his way and greeted him with a sheepish smile.
The last quarter was successful and during the lunchtime, the boss set up a little party in the conference room: salads, sushi, pizza, music. "Who is she? For a technical person, she was too cute.' Robert remembered his university life and only a small number of girls rarely sprinkled among men's heads in engineering classes like the pieces of chicken in Caesar's salad.
"Even though, what's the difference?'

Girls crowded in another college, the college of arts. It's there where Robert met his future wife, that levee that repelled from his consciousness the attacking waves of all other women.

His wife was for him …everything. He loved her face, her hair, her calm, slightly convex eyes, he inward-looking gaze, her unhurried movements, when she read, stood by the easel and painted, or even washed dishes. With all her calmness, she somehow was always on time and it was clean and smelled good at home.

He enjoyed the sound of her voice, loved her reticence and always waited for her rare, but sensible words. She opened for him the World of art. They went to museums where she described to him what one or another artist did. She explained it differently than museum guides, somehow in her own simple way. He understood everything right away and this understanding poured into his technical mind as a soft and warm torrent.

She introduced him to artists. Their conversation and even their drunk arguments were interesting and somehow worthy. They all treated him well, accepted him in their inner circle and called him "Our technocrat."

When she worked, Robert silently stood behind her and observed her movements, embodiment of her thought on the canvas, and it filled him with pride and sweetness, with the thought that she could be his any moment and be gentle and passionate, like she was that first time, back at the university. During those minutes Robert caught himself on a thought that he didn't want anything whatsoever, except for the continuation of the current moment.

At times though, she got irritated, didn't want him to stand behind her back, told him that he bothers her and that she needs more elbow room. In cases like this, he retreated, went to do his own stuff, read some technical literature, made calculations, and wrote reports... This lasted for five years of the calendar time, that flew by for Robert in a minute.

Relatively recently, something new and troubling entered their life. It had to do with her work. More often than not, she was frustrated. When Robert asked her what was the matter she only irritably waved at him and, pointing at the painting, she said: "Why are you asking? Don't you see it yourself?"

Robert looked, and looked, and couldn't understand what made her frustrated. To him, the landscape seemed very pretty. The sky and the trees breathed with freshness.

"No, no, look here!" she pointed at a spot in the picture, "this is lousy, weak, stupid! This is crap! Don't you see?"
Robert didn't see that.

"You simply exhausted. Try to rest. Do you want a massage?"

"No, no! I am not tired, I just have no talent! I cannot get through this! It's like the wall!"

"Jesus!" She stepped away from the easel, put on her coat.

"Where are you going?"

Then she was leaving. Robert walked the apartment back and forth, and tried to think how he could help, and realizing that he was helpless, he felt frustrated.

She began to stay in her studio for a longer time. When she came home, she stood at the window and looked out into the yard, into the darkness, and at the falling snow.

Then, seemingly, there was a breakthrough. She cheered up. There was an obvious progress in her work. Her graphical manner changed, the palette became brighter, more saturated. She worked a lot, with desire and ease. Yet something was still wrong. She smiled a lot, but she directed the smile into space as if she were not with Robert. At night, she often turned away, or lie on her back with her eyes open and silently looked at the ceiling.

"What are you thinking about?" Robert lifted her chin with his hand and looked into her eyes.

"Nothing, really" She moved his hand away.

Now she stayed late at work almost every day. When she came home, she looked through him and it was blue under her eyes. At the arrival, she did not say anything, but went straight to the bathroom and took a shower; then she went to bed and immediately fell asleep. Robert felt as if some new foreign influence entered her space: her brain, soul, and body.
Once when they ate dinner in the kitchen she looked into his eyes and said:
"You are so nice."

He came to her art studio and for a long time walking on the other side of the street to keep himself warm. Then Robert saw how she came out as if blind as a smile flitted on her lips like a bird of happiness. She walked arm-in-arm with another man.

The moon looked frowny. It was no point to fight. Even if this will be temporary, from now on it will repeat and repeat like gusts of wind in different directions. It couldn't be any different as his beloved was sliding away alone the moonlight somewhere to the curvature of the universe. He became uninteresting for her as a frequently cooked dish.

"Mr. Ross, what coffee would you like black, cappuccino or latte?"

"Do you want a piece of cake?"

When the girl turned to the table and bent down to reach for the piece of cake, Robert looked at her from the back. She had a pleasant figure with a fairly thin waist line that expanded in hips.
Robert looked out the window. The night was falling quickly as if someone poured down black emptiness.