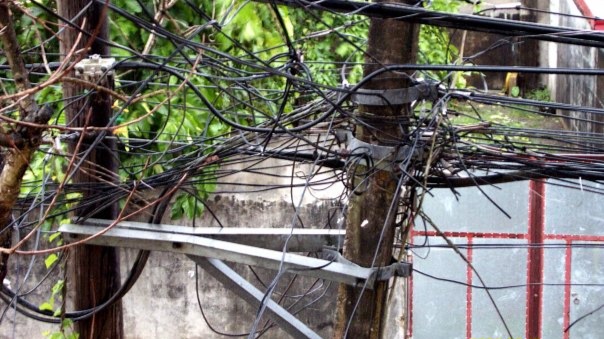 On Alternative Energies and The Grid in Sustainable Development

On Alternative Energies and The Grid in Sustainable Development:

No matter what the benefits may be, there are still enough detriments to bring the ability of solar and wind generated power to replace fossil fuels (or even abiotic fuels, as some believe oil to be abiotic in nature) remains in doubt at present.

Research and Development is ongoing in both of these fields though, and it is hoped that one day these will offer just some of many alternative energy solutions for the world. In the meantime, there are a great many other alternative methods also in consideration and under research, some in development and others that are ready to be tested in “real world environments”.

One of the biggest challenges facing alternative advocates seems to be the ability to tie everything in to “The Power Grid”.

Given the limitations and vulnerabilities of the existing power grid, it begs the question as to whether or not the existing or current power grid should be utilized at all.

If there is to be a central, controlling facility to distribute power, how should it be delivered?

If individual homes are capable of producing their own energy, should they be allowed to do so independent of centralized control and authority?

Despite the “Scientific Consensus” being “settled” (Is science ever really settled or only the politically motivated sciences?) there is still a great deal of debate about whether or not fuel oil and the crude oil we are pulling out of the earth are biotic or abiotic in nature.

Unfortunately, while these points are being pondered between two sides who seem to be seeing who can attack the other in a more immature fashion, other important questions are being ignored altogether.

Should we rely on crude oil at all?

What is its function inside of the earth?

What is the short term and the long term impact from removing such large quantities from the earth?

Among the most important questions of all that should be researched and developed are whether or not there are better alternatives.

There are indeed a great many alternatives and there are people like us working together with a number of groups to research, develop and implement these technologies.

There are already a great many alternative resources that have not or even cannot be blocked and hidden away.

One of the most common answers is Nuclear Power and while it does have its merits, as has been seen in Fukushima and in Chernobyl and even to a lesser degree in Three Mile Island, there are some well-founded concerns with this approach.

It would probably be fair to say that the NIMBY (Not In My Back Yard) defense alone would make this approach to alternative power difficult at best. We are also working with groups to allow for the reduction of radioactivity in radioactive waste and while there is measurable and tangible success, nuclear power is probably not going to be one of the programs implemented on a massive global scale any time soon.

So what other alternatives are available?

Some of the current efforts revolve around Hydrogen Fuel Cells and even Natural Gas trapped from the current, natural decay of organic materials produced by humans and animals, not through fracking or other artificial means that may or may not be detrimental to the environment.

Other projects revolve around Solar and Wind power and increasing efficiency and affordability and at the same time reducing the detrimental environmental aspects in large-scale power generation utilizing these techniques.

One of the many projects also includes the storage of excess electrical power that has been generated and this is done with the use of wholly organic, large-scale batteries that can provide a steady, consistent supply of power to homes once it has been charged up and if and when it dies, it can literally be dumped right back into the surrounding earth with absolutely no negative impact on the local ecosystem or environment according to the engineers who developed this technology in Germany.

Other promising fields of study and technologies include electro-magnetics and power-amplification. A good deal of this information is proprietary in nature at this time but as technologies evolve, it is hoped that more and more will be released out to the general public in addition to being made freely available to the scientists, researchers and developers in Integrated and Adaptive Community Developments that will be established around the globe.

This leads to the question as mentioned above ... “How does all of this get tied into the electrical grid?”

Is the current power grid actually worth saving though?

It is well known that the current power grid is extremely vulnerable to both physical and cyber attacks and as such, needs to be updated regardless of what the new power sources are.

Is it possible that this revision can be completed in such a manner so as to reduce the vulnerabilities to the grid, reduce the level of dependence on the grid (and on more traditional fuel sources such as coal and oil) and at the same time retain the same levels of efficiency that are currently enjoyed in the more industrialized cities and nations?

The answer is a very emphatic yes.

In fact, as more and more isolated and rural locations receive power, some for the very first time, it will be clearly demonstrated how electrical current can, in many cases, be generated right on site and/or at the local level with no need for the power grid as we currently understand it.

This technology is generally promoted as Point of Use electrical power generation and is just one of many alternatives to the current power grid that we will be discussing here over the course of time. Given our understanding of the power grid though, we still have to question whether it is necessary, or even beneficial to tie in to and rely so heavily on a system that is already so broken.

Despite their shortcomings, both wind and electrical energy provide consistent and capable supplemental energy that is suitable for low-amperage usage in most any household. These supplemental systems can be wired in more inexpensively with speaker wire, and generally no need for expensive power inverters or other means of converting the DC power to AC.

Don’t think you will have enough light? When was the last time you were driving down a dark road at night and had a car come by the other way with their headlights on high beams? You can get more than enough light, and 1156 and 1157 bulbs make great nightlights or softer lighting for times when you want to watch television or enjoy other activities in a more subdued setting.

And yes, you have probably seen the television sets and dvd players the last time that soccer mom pulled up next to you at the red light. Those kids in the back watching television on a 12 volt system, yeah, it works in a home as well. That car with the boom box that pulled up next to you? Yes, even your home stereo can be run on 12 volt DC directly … no pun intended.

While such technologies can already be implemented in some areas of the world, many of the more industrialized nations have oppressive laws, regulations, and other restrictions in place that prevent the introduction of such supplemental systems into the home, despite the reduction it would have on the dependence of more traditional fuels.

I personally ran a 170 acre ranch with little more than 12 volt DC power, a windmill to pump the water and fill the retaining pond, and a solar heating system so that I could have hot and cold running water.

Granted, I had a full generator for those times when I had to run my machine shop, and I did not use hot plates or electrical stoves, but propane or more accurately, natural gas which requires a slightly larger pilot light, but can also be generated through traditional methods of digesting without the need for fracking.

I also used natural gas for refrigeration. Although it is based on ancient ammonia technologies from the early twentieth century, it has become quite common, especially for tractor trailer drivers, and in recreational vehicles.

And best of all? Literally none of this was tied into the grid.

Don’t get me wrong, the city definitely wanted me to tie into the grid, and threatened to tie me in and then bill me, but fortunately, back in those days at least, the city could not force business upon you, and the city was not going to risk running ten to fifteen miles or so of power poles, billing me hundreds of thousands of dollars, and risk being sued at the same time.

The key being, that the only reason I was able to do all of that, was because there was no grid for me to tie into to begin with. If allowances could be made, even for supplemental point of use energy, and maybe even a tax break or two for those homeowners who built such systems, it would immediately show a reduction in the dependence on the grid and more traditional power sources.

While this is only one possible solution, it is a possible solution. The focus of corporate utility companies and even government seems to be on constantly increasing their bottom line regardless of the needs of the people.

Again though, if we can stand on a united front and speak with a united voice and present irrefutable solutions, not only would the world listen, but these same governments and corporations would be compelled to act.