We are going to take a brief detour from major world events and focus on another specific banking family that ruled over Europe in the early 19th century and had large impacts on the events that we talked about this far. The Baring Banking family dominated Europe through the late 18th century and early 19th century, and their business continues to have an impact on the world today. They were one of the largest and wealthiest families in Europe and the world before the Rothschilds eventually dominated the financial realm and made other banking families’ power and wealth look minuscule.

The Barings Bank was conceived in 1762 in London, England by two brothers named John and Francis Baring.

John was the quiet brother, and after he started the bank, he became a member of the British Parliament and High Sheriff of Devon in 1776, which gave him large amounts of political power within London and toward the rest of the United Kingdom’s government.

Francis was the younger brother and certainly more pronounced. Francis and John were both born into wealth because of their father’s wool business, but Francis was determined to become involved in the private industry in order to extend his family’s fortune and started at a very early age. With John perusing the political realm and Francis focused on private industry, they were the perfect duo to create a banking empire and spread their influence across the continent and globe.

Their family’s wealth allowed Francis to join a seven-year apprenticeship when he was 15 under one of the most successful merchants in the United Kingdom. During the mentorship, Francis is said to have been extremely successful, “It is said he made his fortune from the slave trade while only 16 years old” (The Manor House, 2021) When Francis turned 22, he was released from the apprenticeship and immediately partnered with his brothers John and Charles to form to banking branches in London and Exeter in England in 1762. These businesses were immediately successful because of the relationships Francis was able to garner through his seven-year tour in the banking and trading business.

After Charles had ruined the Exeter branch from his poor investments and decision-making, Francis and John changed the name to the Barings Brothers & Co. in 1807 and added many financial services to their list of expertise. Charles's poor decision-making did not destroy all of the family’s financial success though, in 1777 the Barings had 20,000 but less than 30 years later in 1804, the bank managed to control over 400,000 with Francis and John continuing to accumulate larger ownership of the company.

Soon after the brothers saw an amazing wealth they were accumulating; they grew their business ventures by opening branches in the present-day United States in 1774. It was clear that the Baring’s connections to the private and public industry made them extremely powerful to England and they played important roles in the British’s decisions in many of the wartime efforts they were encountered during their time. Furthermore, Francis also was the director of the East-India Company, which at the time controlled most of the land of present-day India. This land proved to be vital to Francis’s efforts to be influential in international trade.

By 1796, the Barings was able to finance the United States government of the purchase of Maine from the United Kingdom, allowing them to garner large interest payments over the foreseeable future and garner close relationships with United States politicians. 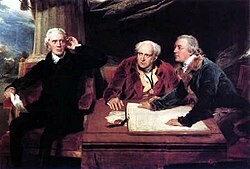 Further land deals occurred in 1802 when the Barings helped orchestrate the Louisiana Purchase of the United States from Napoleon and France. As we previously mentioned, some historians believe that the Rothschilds had a large hand in providing money for the United States government to purchase the massive land during the transaction because of the rising prominence of the family. Nonetheless, the Barings were the actual owners of the land even those it was under Napoleon’s control. History tells us that the United States were the buyers and Napoleon and the French were the sellers in the French revolution. In reality, the Rothschilds or other Money Changers were the buyers and the Barings were the sellers. However, the Rothschilds or Money Changers advanced money to the United States so the lenders could be paid interest until the contract met its maturity. The Barings would be the benefactor of the payments that were owed to France, “After a $3 million down payment in gold, the remainder of the purchase was made in United States bonds, which Napoleon sold to Barings through Hope & Co. of Amsterdam” (Wayne T. De Cesar and Susan Page. Spring 2003).

In Conclusion, the United States did not have enough money to buy Louisiana, so they borrowed money from the Money Changers; the Money Changers would earn interest on this loan. The money the United States government borrowed was given to Napoleon and France, who in turn handed it to the Barings and were able to immediately collect massive wealth, power and influence.

After John and Francis retired, they handed the assets and bank over to their heirs where they would continue the financial dominance their fathers had taught them.

Another large funding scheme from the Barings banking empire to the United States occurred during the War of 1812 when the Barings advanced large amounts of money to the United States war efforts in order to protect their American interests. After the United States successfully defended themselves, the Barings were able to make off with earning interest on the loans, while they were facilitating the movement of military equipment across the ocean during the war, and profiting the entire time, by this time the Barings family and bank had become so powerful that Kristin Aguilera states the Barings were described as the "the sixth great European power" after the most powerful monarchy’s in the continent who were involved in the French Revolution that we discussed earlier (Aguilera, Kristin. 22 January 2013).

After changes in Baring's leadership in the 1820s and 1830s mixed with the rise of the Rothschild family’s power, the Barings fell as the most powerful banking empire in Europe. Nonetheless, the international connections and wealth the Barings family developed allowed the family to remain one of the most powerful entities in the world. To ensure the Barings would maintain their level of influence and control over economies, they moved a vast portion of their business to the growing country of the United States in the 1830s. This was largely influenced by Baring's new American investor and partner, Joshua Bates, who maintained and less than a decade later in 1843 became the sole banking agent for the United States government financial interactions to Europe for nearly 30 years.

The Barings banking family continued their success up in America and Great Britain up to and through the civil war in the United States. However, in the late 19th century, the Barings Bank's incompetence and poor judgment suffered caused the Panic of 1890 or the Baring’s panic which resulted in a large financial loss to the institution. As a result of their decisions, the Barings Bank would see a loss to its international power and influence, but we will mention this later as we get closer to the turn of the 19th century.

After a bailout by the Barings Bank, the institution would continue to have substantial wealth throughout the 20th century. We will discuss them later, but it's important we get a background and understanding of how the Bank came to be and dominated international finance in the late 18th and early 19th centuries.

The Barings family developed to become an important European and American banking family that controlled large portions of the world’s assets through some of the world's most important wars. As a result, the Barings had a great influence on the decisions and outcomes of the government's actions within Europe and North America. Not only did the Barings have a large influence in the United States and Europe, they controlled trade in India and Latin America making them one of the most powerful international trading organizations in the world  who continue to still have an influence on the lives of citizens around the globe today.

I love decentralization and human coordination. I started investing in crypto in March 2021, so I'm a newbie. Please check out my website themoneychangers.org for the latest posts, merch, free crypto courses, community, and more!