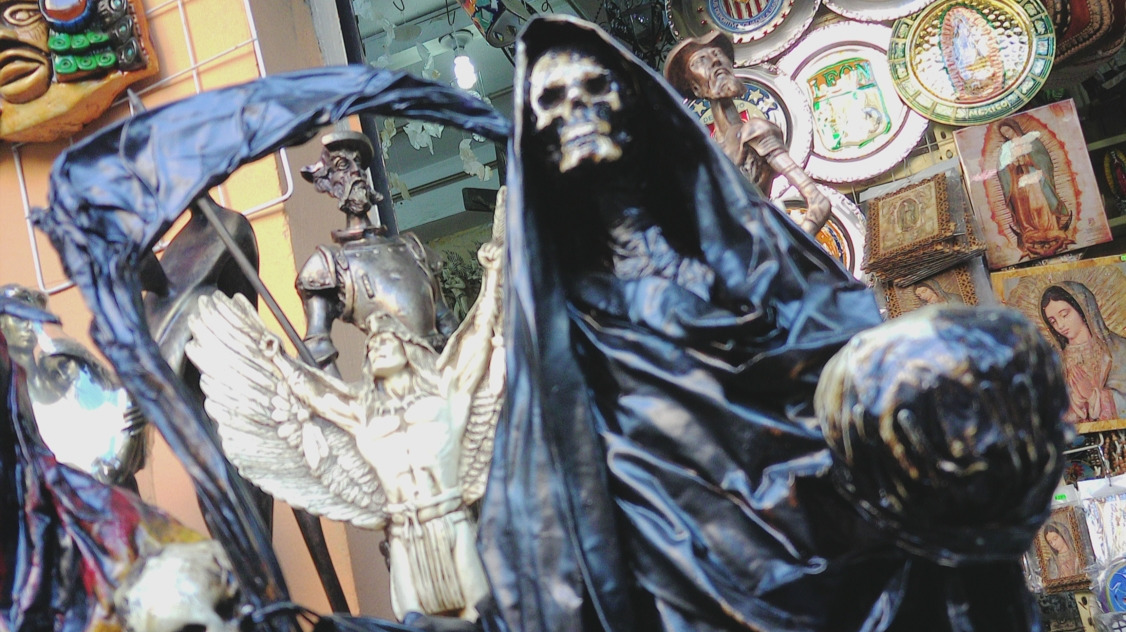 About a week before Halloween, I visited a cemetery near San Miguel de Allende and felt like I was on the rough side of Christmas Village.  Festive-yet-morbid gangster vibes permeated everything, but the sense that I was hanging out in Christmas Town was undeniable.  The graves were very colorful, possibly constructed of pure Oaxacan gingerbread.  I will probably never know.  Whatever the reason, I felt like I was hanging out in Christmas Town, walking through the cemetery.

In spite of this, I have decided that Mexico is Halloween country.

Which is to say, Mexico is a Halloween country.  It's not a Christmas country.  These people pretty much live inside the Halloween of nations.  It is where they're from.  If Halloween had a land mass, a flag, a heritage, a culture, a citizenry, a national history, Mexico would be it.  Mexico is it.  This place is Halloween.  Even before you get to the Santa Muerte and Malverde cults, the entire country is drenched in death imagery all the time.  Even now, during Christmas. 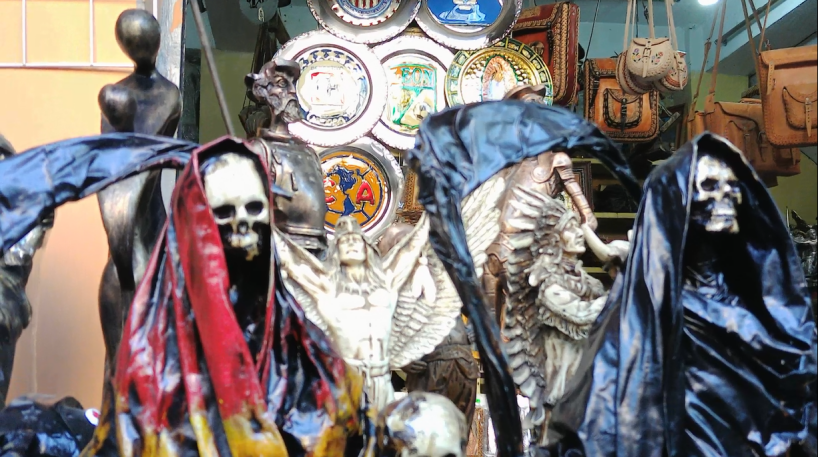 Smoking a cigarette in a gold suit and top hat: 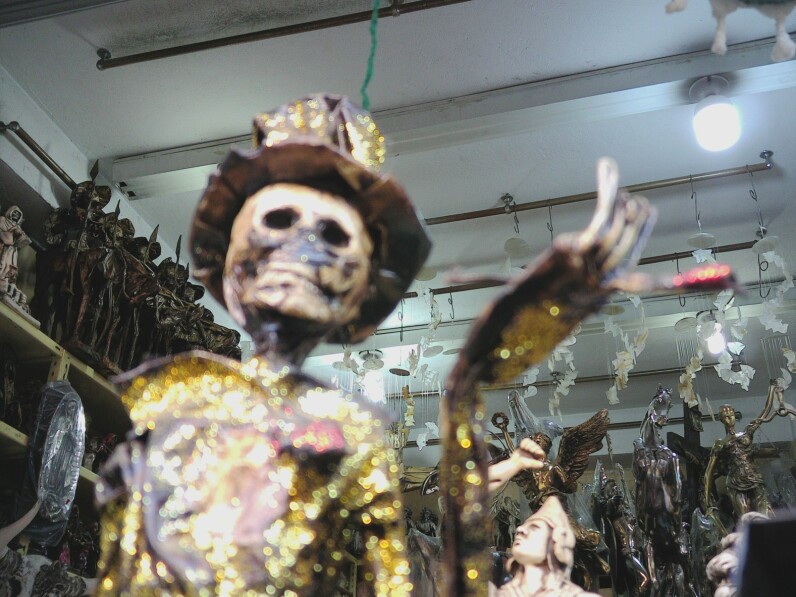 Standing in a pink suit in front of a shelf full of colorful skulls: 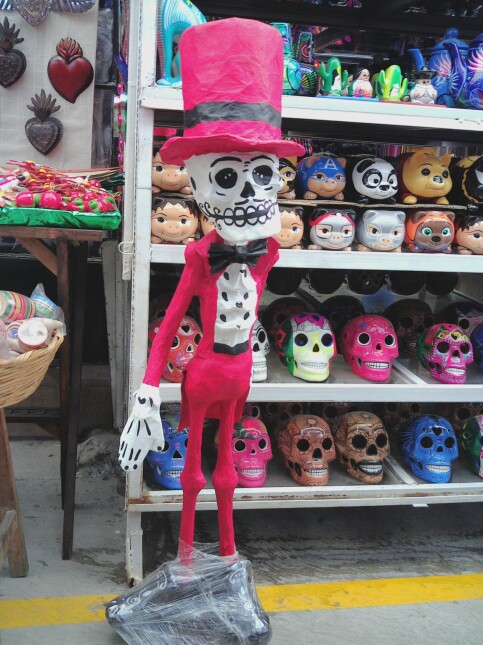 And his wife, Mrs. Death: 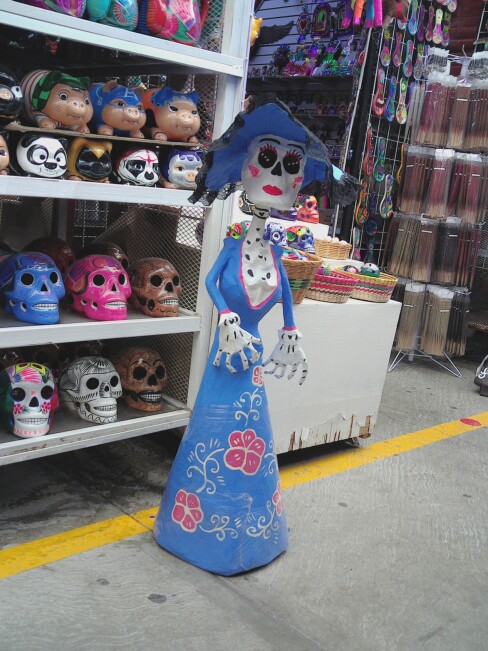 Don't forget El Diablo, and the army of little demons at his feet: 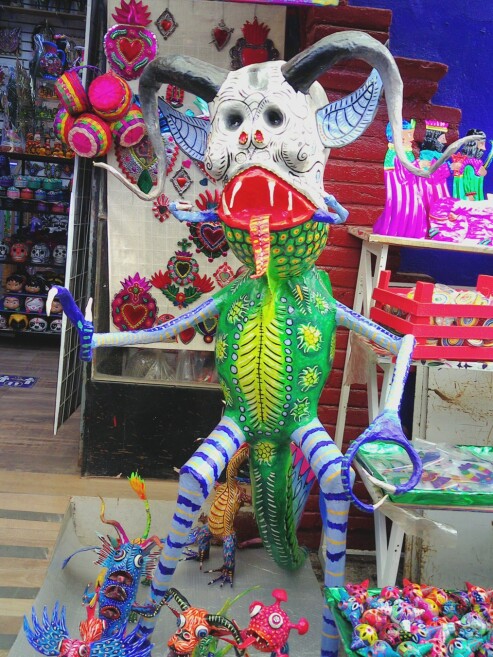 I looked at a house in Puebla several months ago, furnished, with a huge statue of the devil standing in a prominent place between the living room and bedrooms.  I mean, it was 5 feet tall, and looked a lot like the thing in the photograph above.  As someone whose own work indicates an obvious fixation on the subject of death and hellfire, I'm not going to pretend to be above it.  I understand that "embracing" death is a way of conquering your fear of it, and that there is courage and a kind of spiritual realism in Mexico's attempt to face the horror of the unknown realm beyond the grave.  I get it.

I think there's a difference in not running away from the subject and putting a large statue of death and/or Satan in your living room, thereby inviting the curse of death and hell into your home, family, and possibly entire nation, but we can have that conversation at another time.

Here's a picture I took in Guanajuato in 2019, of a father encouraging his son to face the looming specter of mortality, complete with lollipop in hand like a sugary scythe:

The kid didn't like it, and broke into tears right after I took this picture:

But it didn't stop his family from forcing him to confront his fears anyway.  And who knows, the kid might grow up completely unafraid of death.  For reason of being born and bred in the Halloween of nations.  He probably will never wear a bicycle helmet, or knee pads, or a seat belt, while he's riding in the back of a pickup truck, hauling ass down the freeway.  Everybody rides in the back of a pickup truck on the freeway.  At speed, with the furniture of death perched precariously above them, like a vulture, or an earthquake, tied together with chewing gum and string, waiting to topple down on their heads and send them to the land of colorful skulls and lollipop scythes in a final, screeching explosion of sugar, gasoline, and Habanero sauce.

Oh how they burn, the sweet, sugary flames of perdition.

There was a small table of Christmas stuff, I did see on my way out the door, visible in this video around the 28-second mark:

Clearly, though, the market is for diablos and death statues, even in December.