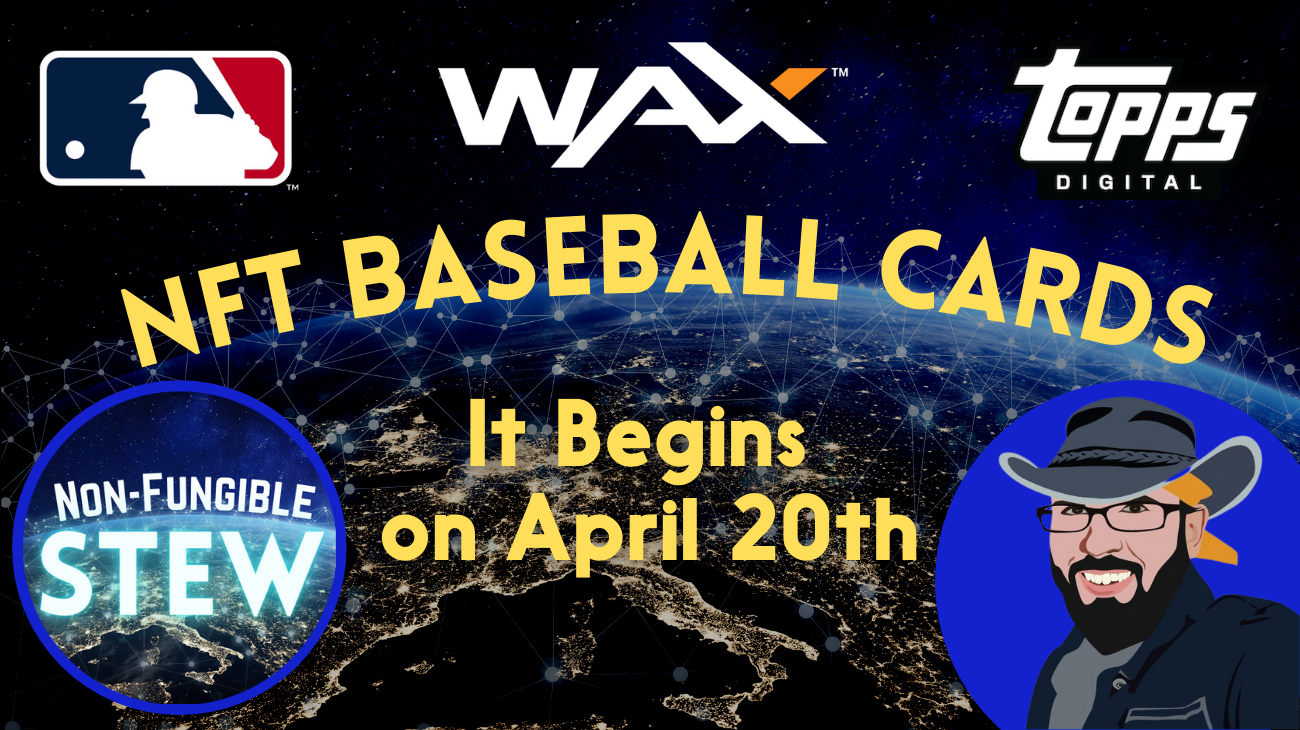 NFT Baseball Cards by Topps - This is Happening!

Since NFT collectibles burst onto the scene about a year ago with the launch of Topps' Garbage Pail Kids on WAX, they have been explained over and over again by people in the know. The early adopters have fielded such questions as "can't I just take a screenshot of your NFT?" and "What gives it value?" They have responded to complaints like "I can't hold an NFT in my hand" and "Digital collectibles are just a passing trend."

Most people who have gone out on a limb in an attempt to explain digital collectibles and NFT assets to a normie have used a certain specific example. Baseball cards have always been the quintessential "collectible," ever since the tobacco companies first created the idea of collectibles in the post Civil War United States as a publicity stunt to sell cigarettes to baseball fans. Next week for the first time, Topps is releasing Baseball 2021 Series 1, a set of (you guessed it), NFT baseball cards. 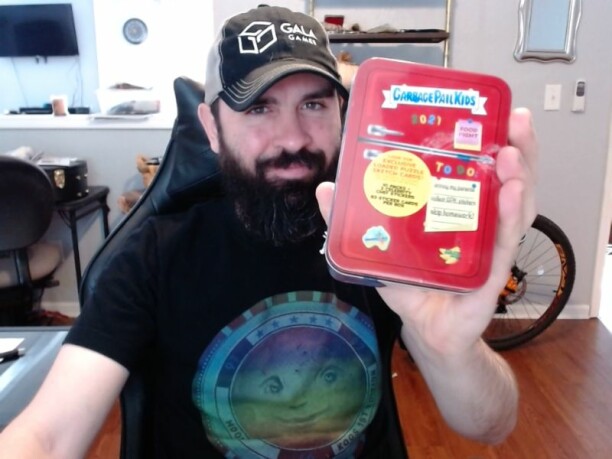 The only reason I would even consider opening this Garbage Pail "Food Fight" collector's tin is if the temptation of redeeming the one exclusive NFT code within becomes too great and I cannot resist. ;) The idea that it contains even a few NFTs is more exciting to me than the pile of physical packs inside.

Blockchains are a method of encrypting and distributing (decentralizing) data, which allows the data to be publicly readable, but still secure. Blockchain assets (crypto, NFTs) live in wallets whose keys are controlled completely by the owner of the wallet. The bad news is that if lost or compromised, those keys usually cannot be recovered. The good news is that real ownership means real security. What I have continued to tell people for years is that NFTs are "supercharged collectibles," with what are essentially built in certificates of authenticity.

As is evident in some recent and tragic forgeries of valuable trading cards such as Logan Paul's $150,000 Pokemon debacle, high value physical trading cards can no longer be expected to stay secure. There are several reasons for this. First, we have the technology to create any type of forgery imaginable. Everything can be reproduced: Watermarks, unique packaging, special paper, you name it. Secondly, if the incentive is there, people can and will go to extreme lengths to sell you the Brooklyn Bridge. Even if purchasing the equipment necessary to create a specific forgery sets a criminal back $30,000, they will do it in a heartbeat if they know that there is a $150,000 sure thing waiting on the other side of a print job.

NFTs solve these problems. Blockchains ownership cannot be disputed; it's all there on the blockchain. That's not to say that finders keepers does not apply, and if some hacker can figure out a way to gain access to your wallet, they will absolutely transfer your valuable asset to a wallet they control. That's why blockchain wallets are so secure and why it is so important to protect your keys and passwords in every possible way.

Physical collectibles may be able to be held in your hand, but even that simple and satisfying act is highly discouraged by serious collectors, who will tell you that your fingers contain oils that are literally destructive to the physical collectible.

While NFT collectibles cannot be held in my hand, I can look at them any time I want. I can share them on social media and show them off to my friends, letting them know that I'm sharp enough to have been there at the beginning of a new era of collecting. They can be animated. They can even contain books, songs, albums, full length videos... anything is possible, and we've barely scratched the surface. An entire virtual world of fantasy could literally be encapsulated into an NFT and owned by someone through the power of blockchain.

Because this article is mainly about NFTs as collectibles, I will only say a few words about the deeper levels of functionality possible with NFTs. For years I have been on the team of the hit digital trading card game, Splinterlands, who has been one of the greatest pioneers of NFTs with utility. They can be used as in-game assets, they can be transferred, battled, staked, burned, combined, wrapped and unwrapped. They can even be rented to other players as a form of passive income. While the world is wowed by the fact that some sucker can pay over a million bucks for something called a crypto punk, companies like Splinterlands, RFOX and Gala Games are making huge developments that will soon show the world what NFTs can really do. 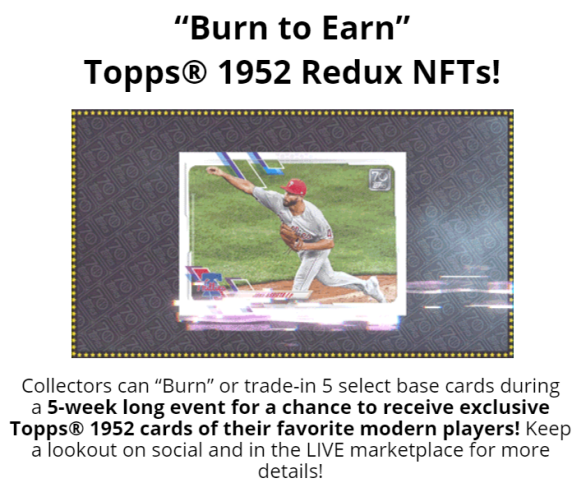 It could be argued that physical baseball cards have longevity, but think about it this way. With all collectibles that have established value, the most scarce or the least printed collectibles tend to be the ones with the greatest values. Sometimes these gems could be misprints that were caught quickly and corrected so only a few of the misprinted versions got out. Other times (like in the case of Honus Wagner, who despised smoking and therefore wanted no part in baseball cards), there is a special story that led to a drastically limited print run. Beyond that, baseball cards have gained value based on the notoriety of the player and the age of the card.

And why do you suppose that the oldest baseball cards end up being scarce and valuable? The answer is simple. Kids in the 50s played with them on the playground, they put them in the spokes of their bikes, the passed them around among the careless and grubby hands of their friends. In the 70s and 80s, many people who thought they were too old to keep them around probably threw the baseball cards away. Sometimes they were boxed up and ruined in flooded basement storage. The point is, with age comes scarcity.

Blockchain assets age, but they do not deteriorate in quality as they age. There is no risk of fading, flooding or ripping, and most of us are pretty sure that computers and the internet will be around for at least the next hundred years or so. NFT releases must take scarcity and creation of value into their own hands, which in turn makes collecting much more fun with mechanics like limited sales, burning, combining, staking and swapping. These NFT collectibles represent the concrete collectible tokens of the future, and they are far more fun to collect than yesterday's physical collectibles ever could have been.

The Topps Series 1 sale goes live on April 20th, in just a few days. The limited supply event will sell two types of packs, a Standard Pack of 6 cards for $5 and a Premium Pack of 45 cards for $100. 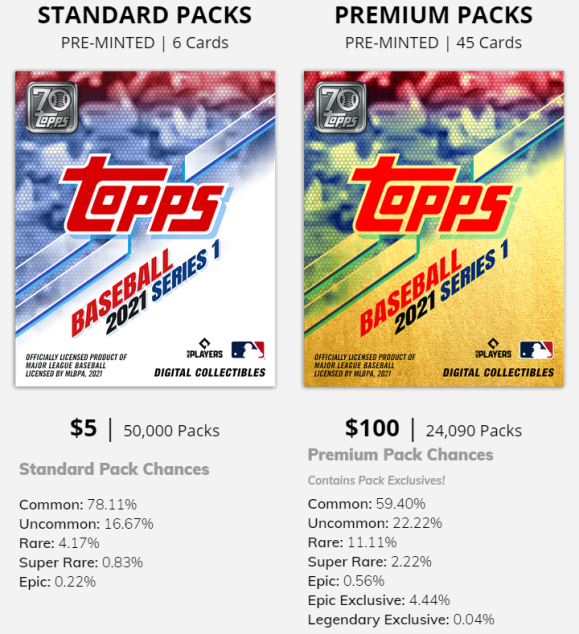 These numbers may seem high, but I expect this sale to break WAX (no surprise there, most of them do) as thousands and thousands of people clamor for a piece of the action. I imagine that they will sell out completely in the first 2-3 minutes, so anyone hoping to get their hands on some Series 1 Baseball cards will need to be there right when the sale begins.

The sale will be credit card only, so prepare accordingly. This also means that a great deal of new value will come suddenly pouring into the WAX secondary markets once these cards start trading, which is good for everyone in the ecosystem.

While I cannot find confirmation of this, I have heard that the sale will begin at 1pm EST. Keep an eye on the website, Twitter and the Discord community for more details.

Thanks for reading Non-Fungible Stew!