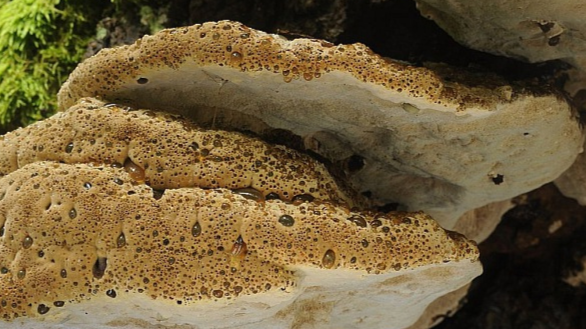 Pseudoinonotus dryadeus - One-year mushroom, growing singly or in clusters of several. 100 to 350 (650) mm long, 50 to 250 mm wide and 20 to 120 mm thick. Console-shaped, cushion-shaped or irregular. The upper surface is uneven and hilly, covered with a thin skin visible only in old fruiting bodies, without brindle. Initially white-gray, then apricot or tobacco, chestnut-colored in old age, finally almost black. The edge is thick, rounded, lighter, sometimes slightly wavy, in growing specimens secreting a yellowish liquid in the form of drops, after drying of which punctate marks remain.

Occurrence: It grows at the base of the trunks or on the exposed roots of oak or chestnut. Rare, not every year it grows on infected trunks.