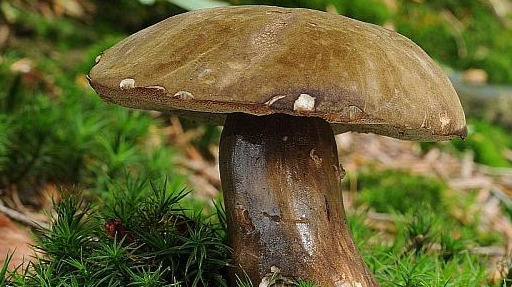 Tubes up to 25 mm long, adnate to the stipe or slightly cut out, first gray-white, gray-yellow, later gray-brown; darken when damaged.

Small pores, up to 1 mm in diameter, initially white-gray, later gray-brown; when damaged, they turn green, then red and black.

White, yellowish flesh greening, bruising or pinking at the intersection. Initially quite firm, then soft, wadded, thick up to 20 mm in a hat. Aroma sour, earthy, taste mild, sour, slightly spicy, rather unpleasant.

Occurrence: On the ground, in deciduous, mixed and coniferous forests, especially piedmont and mountain; uncommon, grows individually or in small groups from July to October.