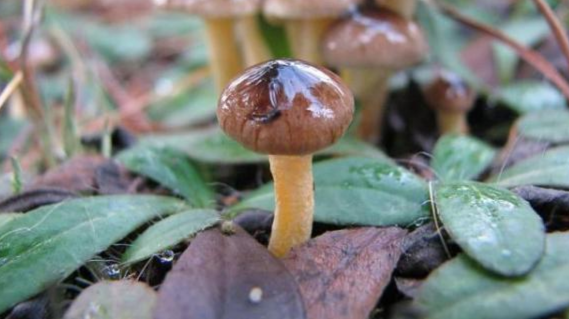 Hygrophorus hypothejus - The hat reaches a diameter of 10 to 80 mm; olive-brown, dark-olive-brown, olive-gray, slightly darker in the center than on the edges, where it turns yellowish in places; young fruiting bodies have a convex hat, which with age becomes flattened, and then slightly depressed with a blunt umbo in the middle; mucous skin; margin bent for a long time.

Lamellae in young sporocarps are whitish and change in color to cream, yellow and finally orange with age; they are wide, rare, soft, of varying lengths, converging.

The stem reaches 50-100 mm high 5-7 mm thick; it is thin, cylindrical, narrowed at the base; it is white in young specimens, then yellowish; below the annulus, the remains of the sheath are mucous.

Occurrence: from November to February, most often after the first night frosts, in large quantities in pine forests, especially on sandy soils; often found; the late appearance of fruiting bodies is an important feature of this species.